The Signaling Theory of Marketing: What Your Actions Say About Your Business

Andy Beal wrote a great post this week called “How to Be a Twitter Guru,” which is not actually (thank god) a guide to being a “Twitter guru.” Instead Andy recounts a flip-out he had on Twitter (which, sadly, I missed) (start from the bottom): 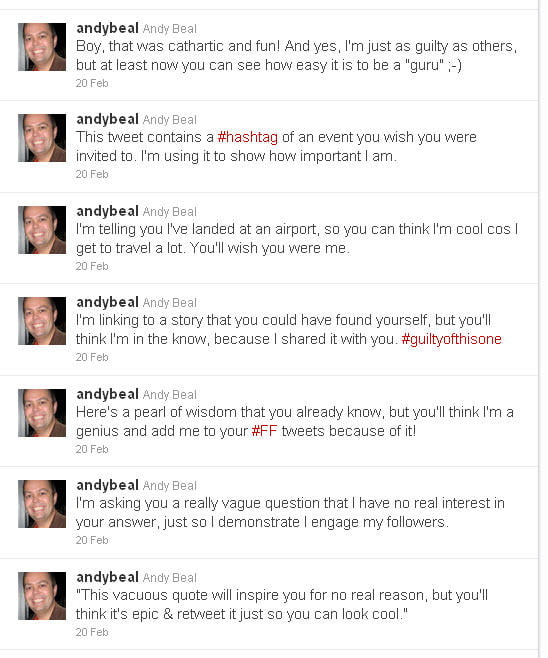 Possibly without meaning to, Andy has put Twitter through the filter of signaling theory. If you’re not familiar with signaling, it refers to behavior whose primary purpose is to “signal” or convey something about ourselves to others – whether or not it’s true. Generally, what we’re trying to signal is status. Some people, such as economist Robin Hanson, believe signaling is responsible for a great deal, even most of what humans do. (You can hear him talk about it in this podcast.)

Here are some examples of behavior that could be seen as signaling:

One of the best examples I’ve heard is about dress code conventions in the programming industry. When you interview at a law firm, you have to wear a suit, but if you’re interviewing for a coding job, looking sloppy is a way of showing how serious you are, because you live in front of a computer and don’t give a crap how you look. I heard a story about a developer who was running late for an interview and freaking out because he couldn’t find his stained t-shirt with all the holes in it.

Once you start to think about signaling, everything seems like signaling – what people wear, the music they listen to, the cars they drive, where they shop for groceries, where they live, the books they read, AND SO ON. It’s interesting to think about your own actions this way, too – as in, am I only going to this concert in order to say that I went? Would I want an iPhone if all my friends didn’t have one?

Andy didn’t use the word signaling, but what he was really saying is that many “Twitter gurus” use Twitter very transparently to signal to their followers stuff like “I find awesome articles and share them!” “I’m generous with my knowledge!” “I am in demand on the conference circuit!” “My blog posts get lots of comments!” “I’m insanely busy because everyone loves me so much!” It’s kind of a version of fishing for compliments, but instead of waiting around for someone else to do it, you just compliment yourself. (And sure, we all do this now and then, but can’t you make it a little less obvious?)

Really, though, it’s not just Twitter – marketing is all about signaling. Think about it: Everything we do as marketers is done in order to signal value to potential customers:

This isn’t to say that marketing is hollow – or rather, it doesn’t have to be. Ask yourself if the signal you’re sending with your business’s tweets, blog posts and other marketing materials is thinly veiled self-interest. Yes, all businesses act in self-interest ultimately, but the engagement shouldn’t feel cheap and cynical. I follow plenty of marketers on Twitter who, whether they’re signaling or not, give me something to laugh about or something to think about often enough that the signal is worth my time.

Dana Todd says “consistency is the new authenticity.” In other words, “if someone presents the same face often enough, it’s perceived as authentic and ‘real’ by audiences, even if it’s a complete hoax. Witness Fake Steve Jobs and Stephen Colbert: people know these characters don’t really exist, but they’re fully formed and authentic characters in our minds nonetheless.” Advanced signaling!

On Search News Central, Gabriella Sannino explains why and how to do a content audit using a spreadsheet, Google Webmaster Tools and Google Analytics.

Reevoo published an interesting e-book called “The Six Essentials of Social Commerce” about the power of online ratings and reviews. (These days, people trust random strangers more than companies/brands.)

Via Wonkette: Someone at the State Capitol building in Louisiana printed out Wikipedia pages to use on a placard next to a statue of the state’s first governor: “The biography is literally just two pages printed directly from Wikipedia, with the URL and everything at the bottom. Worse, it was printed in 2009.” Yowzers.

This is a cool visualization of the 100 longest deletion discussions on Wikipedia.