How Product Listing Ads Are Stealing Your Conversions

If you’ve ever done a Google search, you know already that Google ads are occupying more and more space on the SERP. What you might not know is that the fancy Product Listing Ads you see are commercial intent-sucking monsters and are stealing all the conversions from both the organic and non-PLA search results.

Today, when someone searches for anything related to a product name, Google automatically populates most of the above-the-fold space on the SERP with PLAs and other blinged-out ads: 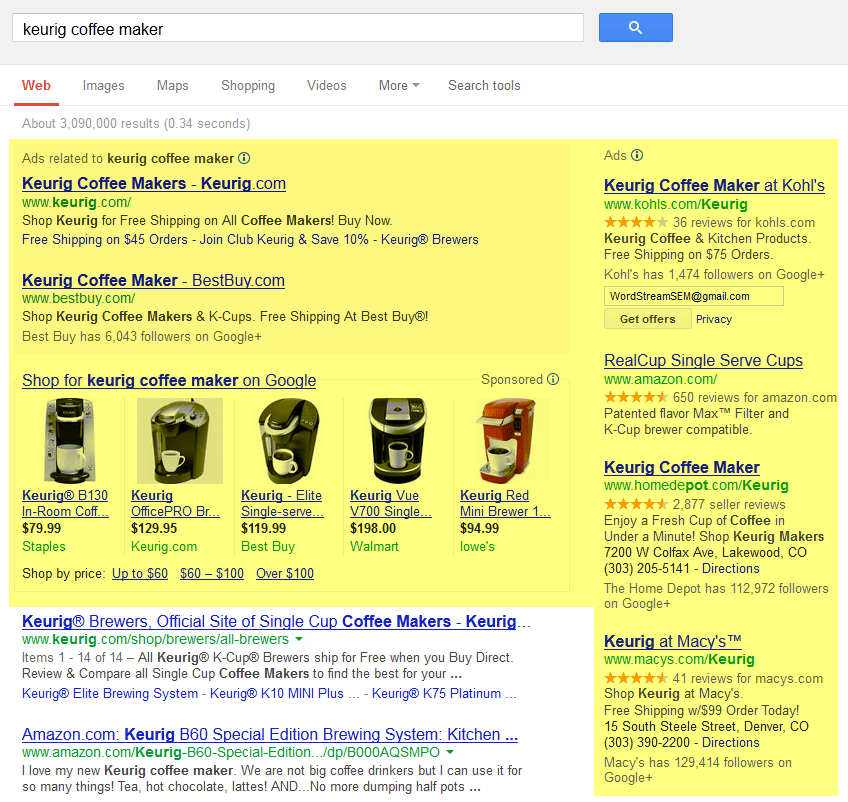 When I search on “keurig coffee maker,” about 80% of the screen is devoted to sponsored results featuring keurig products– I have to scroll below the fold to see more than two organic listings. All the ads you can see here make use of extensions (such as offer extensions, location extensions, etc.) but the PLAs are especially compelling because of the image and price information.

Last year, we did some research on ad-filled SERPS like this and found that about two-thirds of clicks on commercial searches go to the ads, leaving less than half of the clicks for organic results.

Here’s what you may not have realized before: The third of clicks that are left, after you take out the people that have clicked on ads, are significantly less valuable to your business.

Why? Because all the intent has been sucked out of the SERP.  How exactly does this happen?

Commercial Intent in Search is a Zero Sum Game

When people execute a search like “keurig coffee maker,” some of those people are going to be further down in the funnel looking to buy now, while others are just looking to learn more about them.

The people with higher commercial intent who know exactly what they want – for example, a Keurig Elite single-serve coffee maker – are drawn right to the ad that shows them:

PLAs make it super-easy for people at the end of the funnel to go ahead and convert, because the ads show searchers exactly what they want and take them right to an e-commerce landing page so they can buy.

On the other hand, the people who are scrolling past those ads and clicking on organic results very likely have less commercial intent. They’re probably in the research phase of the funnel – they may be looking for reviews or just trying to figure out what a Keurig is – so they are less likely to buy during that search session, and may never convert to a sale at all.

It’s Not Just About SEO: PLAs Steal Intent-Driven Clicks from Other PPC Ads

However, in AdWords, it’s currently possible to display two ads for the same keyword – both a standard text ad and a PLA. Companies that have just started running both kinds of ads have a rare opportunity to A/B test how the addition of PLA’s impacts their regular text ads.

At the Search Insider Summit in Florida last month, I attended a roundtable discussion on product listing ads with several big-brand PPC managers who all revealed the same thing: their PLAs were kicking ass but also sucking conversions away from their run-of-the-mill text ads.

Meaning, the increase in ROI from running PLA’s was at the expense of the other text ads they were running – you can’t double your sales by running both types of ads. As a result, all of the advertisers I spoke to were primarily shifting budget from vanilla plain text ads towards PLA’s as opposed to creating completely new budgets.

I believe this is because the PLAs are so information-rich. Prospective customers know exactly what they’ll be getting when they click on the ad, including the price. With a standard text ad, on the other hand, you run the risk of getting the click and then losing the sale, if people decide they don’t want to pay that much for your product or that it’s not exactly what they were picturing.

If You’re an E-Commerce Business and You’re Not Using PLA’s, Good Luck!

PLAs are just one more way that GOOG is sticking it to non-advertisers. Google is creating an environment in which you have to use AdWords to compete in search. You may still be able to rank on the first page for your product keywords, but those listings are not only getting pushed further and further down the page, they’re significantly less valuable since the commercial intent has been drained out of the SERP already by the competing Product Listing ads at the top of the SERP.

And it’s not just about SEO vs. PPC. It’s getting to the point where standard-issue text ads aren’t enough – you have to use all the bells and whistles that Google makes available to you. Otherwise you can’t hope to compete. If you’re an e-commerce company, it’s crucial that you set up a Merchant Center Account so you’re eligible for PLAs and dynamic remarketing.

If you’ve tried running PLAs and regular text ads on the same keywords, what were your results?