When Google originally tested Gmail Sponsored Promotions (GSP), now known as Gmail Ads, they lived in their own UI (not in AdWords). Google saw success with the beta and released it to AdWords, where it became available to all advertisers. There were some issues with the AdWords integration, so GSP was put back into its original beta state. Very recently it was released again for use to all advertisers!

Let me share with you what GSP is, how to set it up, targeting capabilities, and tips.

GS Who? What Is Gmail Sponsored Promotions?

Gmail Sponsored Promotions are a way of targeting users based on their Gmail account activity. Google anonymously crawls through Gmail users’ inboxes and pick up on keywords that you’re bidding on (kind of creepy right?). If there’s a match, your ad will be eligible to serve in the inbox of the user who had the match.

How Can I Best Leverage Gmail Sponsored Promotions?

The best, most controlled way of using GSP is to bid on your competitors’ domains. For instance Coca-Cola might bid on Pepsi’s domain (Pepsi.com). Anyone receiving promotional emails or newsletters from Pepsi will be eligible to be served a Coca-Cola ad in their Gmail inbox.

Another cool way to use GSP is to target businesses who have the same target market, but who are not competitors. For example, a florist could bid on theknot.com (a wedding planning site) – because a bride-to-be is in the market for flowers for the big day.

All of the normal targeting options of the Display Network are available for GSP. Segmentation via gender, age, and parental status are all possible.

Cool – But Is ROI Viable?

Because Gmail Sponsored Promotions has come out of beta, I expect the competitive landscape to change over the upcoming coming months – now that all advertisers have access again. That being said, I wanted to share some of the data I’ve accumulated while GSP was still in beta.

I have clients across multiple industries, and across the board I saw similar results in click-through rate and cost per click. While GSP was in beta, I saw average CTRs of about 10%. These clicks came through at the average dirt cheap price of about $0.10/click. The most unexpected results of my tests were that plentiful conversions pulled through with much lower CPAs as compared to my normal search and display campaigns. Take a look:

Ok, here’s the boring stuff – Gmail Sponsored Promotions are technically part of the Display Network, so your campaign will need to target display to be able to get these up and running. I recommend setting up a new campaign targeting Gmail, so you can adjust your budgets accordingly and allocate more or less funds to GSP as you watch performance data.

That will lead you here. Select the last option, ‘Gmail Ads’:

Here’s an example of a mock ad I created. Just fill out the following:

And you’ll get this in return! The ad will have two different views. 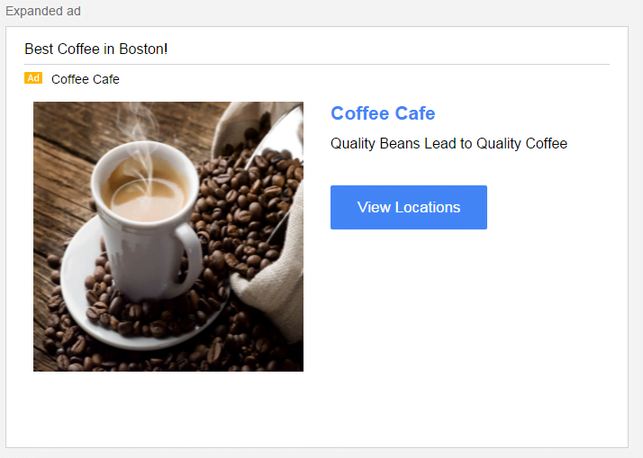 Now go get some cheap clicks!

See other posts by Helen Edwards