I don’t know how it happened, but summer’s coming to an end. In only a few short days, I’ll be replacing my sunglasses and sunscreen for notebooks and my old Ti-83 Plus as I head back to school for the fall semester. 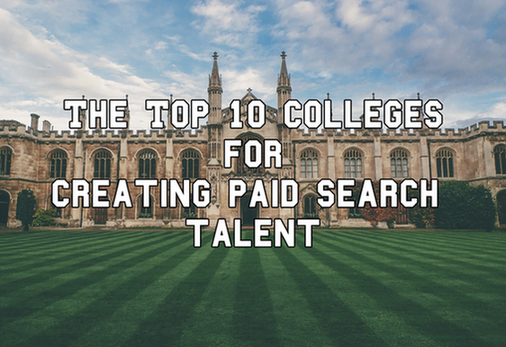 We know PPC is hard for marketers working in education, but which schools are best at graduating paid search professionals? I took to LinkedIn and collected data from tens of thousands of US-based users with current job titles including the terms “PPC,” “Paid Search,” “Pay Per Click,” “Search Engine Marketing,” “SEM,” “AdWords” and related terms and compared which schools they got their education from to create a list of the top 10 colleges at producing paid search professionals.

And here they are, counting down to number one. Did your school make the list?

The for-profit private university boasts the largest enrollment of any school in the United States, so it’s no surprise that a number of their alumni find their way into PPC. But what many may not know is that the school has a special dedication to Google AdWords, particularly their marketing team. The University of Phoenix spends more marketing dollars in Google AdWords than any other, an estimated $46.9 million annually in 2011. 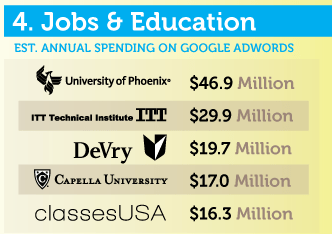 The first of many Southern California schools to make the list, SDSU regularly graduates a large number of paid search professionals. In addition to having an excellent marketing major, it is one of few large schools to offer a course specifically on online marketing which features lessons on SEO and SEM practices.

One of the few east coast schools to make the list, NYU boasts a large number of graduates in the paid search space due to its large student body and a number of flexible-hour continuing and online programs for students. NYU also has a strategic advantage from its location in the Big Apple, adjacent to large marketing agencies, tech hubs, and a block-wide Google campus all in need of pay-per-click marketing talent.

The University of Michigan, recently named one of the top 5 best value colleges in the US, is a very attractive choice to many future paid search professionals. Boasting a student body of over 43,000 there’s no wonder why there are so many Wolverines in PPC.

Penn State takes the top spot for east coast schools on the list, but its alums are increasingly coming from all over. The US News & World Report recently rated PSU as “The Best Online Bachelor’s program,” which naturally cultivates a lot of paid search graduates. In addition to fostering a great number of SEM graduates, PPC evangelists Brad Geddes (@BgTheory) and Julie Bacchini (@NeptuneMoon) are notable Nittany Lion alumni.

ASU, one of the largest public universities in America, is also one of the largest sources of PPC talent. In recent years, Arizona State has made impressive changes to its online programs, which earned it the #8 spot in the US News & World Report ranking of online Bachelor’s programs. Possibly, ASU has been increasing its own AdWords budgets and promoting their online programs over the past year per SEMRush estimates.

One of the few private schools to make the list, BYU also has one of the smallest student bodies on the list, with under 30,000 students. Despite this, BYU graduates a startling number of paid searchers, including #ppcchat regulars Luke Alley (@LukeAlley ), Chris Haleua (@ChrisHaleua), and Robert Brady (@Robert_Brady). Utah is quietly becoming a major tech hub like California, New York, and Massachusetts and the alumni of BYU in Provo, UT may be best posed to take advantage of the growing need for internet marketers in the region.

UCLA takes the bronze medal in this Top 10. The Bruins’ large student body and position in the epicenter of the Los Angeles cityscape help ensure that a large number of their graduates find jobs in local PPC positions.

2. The University of Texas at Austin

Austin is often considered either an outsider or an oasis in the state of Texas, depending on who you ask. The University of Texas in Austin with its 51,000 students certainly helps contribute to that. Not only do Longhorns benefit from the surrounding developing tech scene, but the school also took the #3 Marketing ranking by US News & World Report.

UC Berkeley could be thought of as the Harvard of PPC, graduating more paid search professionals than their nearest competitor in Texas or their cross-state rival in Los Angeles combined. So what makes the Golden Bears special? The public university may not have the largest study body, but they only accept the most dedicated. UC Berkeley only accepts 18% of their applicants – one of the lowest acceptance rates of any on this list. The selective nature its admittance committee combined with Berkeley’s close proximity to the Bay Area tech hub and Google’s headquarters makes UC Berkeley a perfect environment to cultivate paid search professionals.

If you’ve missed the registration deadline for the fall semester, but want to go back to school to learn some PPC, I personally recommend WordStream’s PPC University. Our football team might not be the best, but it’s the best place to learn paid search online – and for free. Plus with the new PPC University app in the app store, you can learn PPC anywhere, anytime.