Facebook is innovating faster than Trump is gaining traction in the polls. While Trump’s progress is slightly frightening, all these improvements to Facebook advertising are a great thing for marketers looking to expand their reach and interact with people in a more engaging manner.

I recently read that as of January 2015, Facebook became largest than the largest country in the world (i.e. China)! With 1.49 billion monthly users, it’s critical to keep up to date with the most game-changing tweaks the platform is making. And Facebook ads keep getting more effective. To keep you up to speed, I’ve laid out the three most thrilling improvements Facebook has made to their advertising platform in the last few weeks, starting with…

I don’t know about you, but when I have customer service dilemmas or order-specific questions I prefer sending a private message rather than broadcasting my issues across my Twitter feed.

Facebook’s ad chief Andrew “Boz” Bosworth has confirmed that I’m not the only one! At TechCruch Disrupt in San Francisco, Boz explained that messaging through Facebook pages has continued to double year after year. “Some companies have told Facebook that it is now the primary place for them to receive customer service requests,” says TechCrunch’s Fitz Tepper.

Facebook is addressing this common behavioral trend by rolling out “click to message” ads, which allow advertisers to create ads that encourage interaction. These ads provide an exciting new way for businesses to further engage with prospects or current customers, spur conversations, and create a more humanized touch to the businesses brand. Take note, if you decide to use this ad format, you will be charged if someone sees the ads, clicks the message button, and sends a message to the business.

It’s the year of mobile, AGAIN! Just kidding, I would never use this outrageously repetitive statement in one of my blog posts, but Facebook does have a point that mobile is an area that needs a major user experience overhaul. As people spend more and more time on their phones (just look around when you’re in a public place like a Starbucks or a bus), their expectations of what can be done on-the-go are becoming higher and higher. Also, with 45 million active businesses on Facebook, the team has decided to prioritize page experience. “Facebook wants businesses to start thinking of their Pages as an alternative to creating designated websites,” says Business Insider’s Jillian D’Onfro.

The most game-changing new feature on mobile pages in the new and improved mobile call-to-action buttons. The new call-to-actions buttons are designed to bring the ultimate goal to the forefront of the page. “Whether it’s encouraging people to book an appointment or browse an online shop, page call to-action buttons on mobile are more prominent, making it easier for business to use their Page to accomplish their goals,” says Facebook.

Take a look at how these CTA’s stand-out below, and also be on the lookout for “send message,” “call now,” and “contact us” CTA’s, which Facebook is testing and hopefully rolling out in the near future. 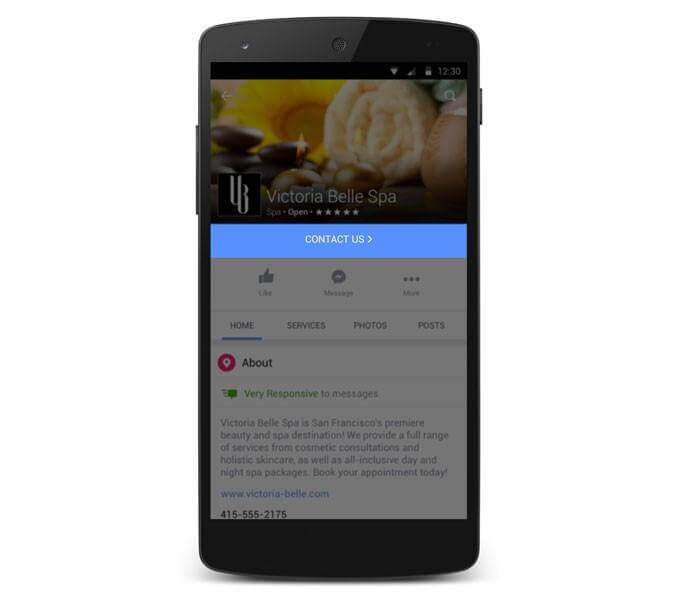 You know that terrible feeling of being charged for something you didn’t purchase? We often take this risk when advertising online. We’re hoping to buy brand awareness, leads and conversions, but that isn’t always the case. There’s times when you pay to play, but your audience fails to notice your advertisements, which defeats the entire purpose of paying.

Luckily, Zuckerberg’s got our back. With the new 100% in-view impression buying feature, advertisers can now ensure that they’re paying for ad impressions only when the entire advertisement is viewed, top to bottom, within a person’s News Feed. The new buying feature is available for all ad formats within the News Feed, including text ads, photos, and videos.

Have you tried any of these game-changing new Facebook ad features? If so, let me know about your experience in the comments below.

See other posts by Margot Whitney