During my junior year of college, as I licked the cheese off of my Dorito decorated fingers, I came to the realization that I was letting myself go. After polishing off a carton of Ben & Jerry’s for breakfast, something in my brain awakened, and I started running. 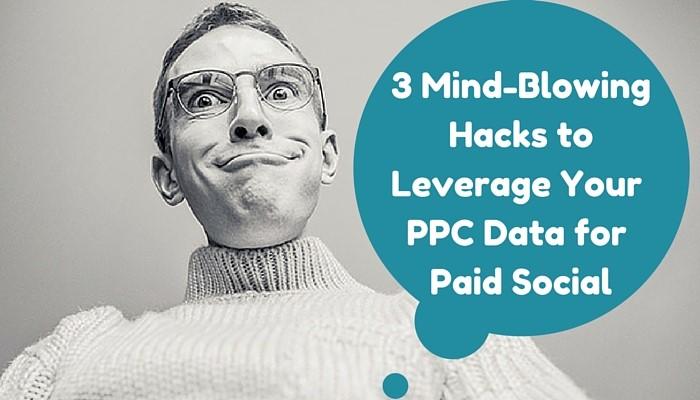 One mile eventually turned into two, two into three. My newly found running habit boosted my energy and confidence, and I was seeing results! Yet, upon graduation I was still at somewhat of a standstill weight wise. The 20 lbs I had packed on throughout the four years filled of binging on Dominos and beer just wouldn’t kick rocks, so I decided to sign up for a half marathon. At the time, the idea of running 13.1 miles seemed nearly impossible. Today I have successfully completed eight half marathons and two full marathons, and I’m just getting started.

That’s me sitting on a duck after completing the Boston marathon.

What does this anecdote have to do with paid search and advertising on Facebook? You turned to paid search to grow your business. You’ve seen results that you’re pleased with, but just as I failed to shed the 20 pounds until I pushed things farther, you’re failing to convert a pool of visitors that previously came in through search. You’re also likely ignoring a huge scope of qualified leads. If you’re limiting your business to only advertising on paid search, you’re not even coming close to reaching your full potential.

Nowadays one of the first things an infant learns is how to swipe and unlock an iPhone. It’s insane to watch my 14 month year old nephew open various apps before he’s even able to form full sentences. Between our phones, desktops, and iPads people are constantly connected, and according to BI Intelligence, Americans spend more time on social media than any other Internet activing, including email!

But, what about your audience? Well, let’s look at the numbers. As of August 2015:

Google+ and Instagram each have 300 million monthly active users.

Facebook is bigger than the largest country on Earth! Your audience is there, but with so many users, how do you find then? Strategically using ads on Facebook is a guaranteed way to get in front of the right people when they’re ready to buy.

But Why Should I Pay to Play?

Good question. Back in the day Facebook was just a place for college students to connect, plan parties, tell jokes, and share photos. Nowadays, the space is cluttered with parents stalking their children, singles looking for love, and businesses promoting their products and building their brands.

Having an organic social strategy is critical for the times when loyal customers are looking to further engage with your brand, site visitors are looking for more information or investors are trying to better understand your business. Unfortunately, none of these scenarios account for the person that hasn’t had exposure to your business or the distracted shopper that has forgotten about your products or offerings they previously discovered through search.

Since the space is packed, posting organically and praying for results won’t get your social strategy off the ground. Think about it, if you’re posting about your new clothing line on Facebook, your un-tapped audience won’t see your ads unless you appear in their newsfeed, which will only happen organically if one of their friends happens to like your brand or engage with a post on your page (and with over 1 billion active users, this is unlikely!).

Moral of the story is that there is a huge opportunity to expand your audience and re-connect with past visitors with ads on Facebook to entice them to convert, but…

There’s one thing we know for sure: your customers are clicking on Facebook ads. With 22 billion ad clicks per year, Facebook is providing businesses with the biggest advertising opportunity since search. At WordStream, 85% of our new customers are already advertising on Facebook or plan to start soon. Not to mention Facebook has an insanely granular level of targeting capabilities, remarketing functionality, and other tools to connect with the exact right people at the exact right time.

This is not to say that you shouldn’t advertise on Twitter because several businesses (including WordStream!) have seen a great return from adverting on the platform. The problem is, “if you don’t know what you’re doing you could end up wasting a ton of money,” says WordStream’s Paid Acquisition Coordinator Brett McHale. Check out Brett’s step-by-guide to using Twitter ads here.

How Much Should I Spend on Ads on Facebook?

When getting started with advertising on Facebook it can be difficult to determine budget allocation. The good thing is that ads on Facebook tend to cost less than other forms of online of advertising (such as search ads on Bing and Google). But, how much should you spend? This question is hard to answer since it varies per industry, audience size, and goals. Rather keep these tips in mind to determine proper budgets for your business.

To shed some insight on budgeting I spoke with Brett to understand how he determined budgets. “I ran a remarketing Facebook campaign for my sister’s small business and $5 a day was sufficient to reach 200 people that had visited her site in the past week,” says Brett. “Her prospecting campaign, however, was targeting over a couple thousand people and I put $20 a day for that.”

So, you’ve built a Facebook page, agreed to Facebook’s Terms of Service, and set up your billing, but what now? Between choosing which content to promote, building compelling ads, determining how to properly allocate your budget, and putting your ads in front of the most relevant audience, Facebook ads can be more challenging than a Rubik’s cube.

One thing you can do is leverage your paid search data and apply a similar strategy to advertising on Facebook. Check out these 3 hacks to get started:

Quality Score is to search as relevance score is to Facebook. Poetic, right? If you’ve been in the paid search game for some time now, you are well aware that maintaining higher Quality Scores is insanely beneficial to getting better results for less money. Quality Score in the mystery metric that takes into consideration factors such as an ad’s click-through-rate and relevancy (keywords, to ad text, to landing page) to determine a score on a scale of 1 to 10, 10 being the highest. If your Quality Score is above 5, you end up getting a discount for each click. For instance, with a Quality Score of 9, you could end up in position 2 but still paying less per click than the advertiser below you in position 3 or 4. So you get more visibility for less cost!

So, the hack is to become a “VIP Socializer” on Facebook by stealing the highest CTR ad copy and creative from your paid search/display ads and re-purposing it in your ads on Facebook. If you create derivative ideas based on the ads that resulted in your highest CTR’s in paid search, it’s more likely than not that strategy will work across other platforms, such as Facebook, leading to higher relevancy scores and better ROI on social. It’s a great place to start!

PPC search clicks add up! Especially the ones that don’t convert into customers. The number one reason marketers get fed up with paid search is because they’re spending all of their budget on a handful of clicks that never turn into customers, but the issue is not paid search; rather, the problem lies in that they’re not taking measures to push these leads that come in through search further down the funnel.

Someone clicked on your ad and visited your site. This is a good sign. We know they’re interested at some level, BUT they need a bigger nudge. There’s thousands of marketing messages being cluttered into their tiny brains, so give your PPC leads a push by remarketing to non-converters on search through social.

I like to call this technique “The Savvy Social Stalker,” because remarketing is creepy, but it can become even creepier (and more relevant and effective!) when done through ads on Facebook. Don’t remarket to every person who visits your site, but rather a smaller percentage that’s most likely to buy.

Social remarketing differentiates itself from remarketing through Google’s Display Network (GDN) in that you are able to get much more granular with your targeting capabilities. For instance, you can remarket to visitors that came in through search in a certain age range with specified interests, job titles, etc. Facebook’s remarketing through customer audiences allows to get more precise to go after visitors that are much more interested and likely to buy your products.

#3: Cloning the Cream of the Crop

Who wouldn’t want to clone their converters? You probably didn’t think it was possible to expand your audience even further, but the power of lookalike audiences on Facebook ads makes this possible. Lookalike audiences allow you to reach more people who share similar traits with your current customer base (think age, gender, and interests).

By “cloning the cream of the crop” you can combine the power of lookalike audiences with your customers that have already converted through search to find demographically similar people to target. How do you do this? By using the conversion pixel from your PPC landing pages, you can create a lookalike audience in Facebook to expand your reach to a new audience that has a higher likelihood of converting, since their clones have already converted.

Moral of the story: don’t be the leisurely 3-miler, but rather become the marathon runner of your industry and start converting more leads into customers by combining paid search with ads on Facebook to create a money-making marketing machine.

See other posts by Margot Whitney