Facebook gives advertisers a near-infinite number of ways to reach potential customers. But while layered targeting can introduce your brand to total strangers and remarketing is the perfect way to push prospects further down your marketing funnel, sometime what you need is something in between.

Enter Facebook lookalike audiences, the perfect way to supercharge your online advertising without breaking the bank.

What Is a Lookalike Audience?

Lookalike Audiences are a way to reach brand new people on Facebook; if you’re familiar with AdWords Similar Audiences, Lookalikes are very similar (except better). The best part about them, though, is that these new people aren’t simply defined by a set of targeting parameters; instead, they actually share traits with a specific group of existing prospects (chosen by you). The possibilities for lookalike audiences (and the degrees of similarity they represent to your chosen source audience), are endless.

If you sell widgets, uploading a list of customer email addresses can help you find Facebook users who act like past widget buyers. If you’re trying to generate leads, creating a lookalike audience based on form fill completions will help you reach folk on Facebook more inclined to fork over their info.

Things to Know About Lookalike Audiences

The size of a lookalike audience is determined during the creation process (more on that later). While you might be inclined to maximize the size of your lookalikes, be aware that smaller audiences often perform better. After all, they match your source more closely. Facebook recommends using a source audience of between 1,000 to 50,000 people when creating lookalike audiences; for a small business, this can be a challenge. Luckily, you can still create smaller lookalike audiences: just be mindful of the quality of your sources.

For top of funnel prospecting purposes, creating large lookalike audiences can amplify your reach; if you’ve exhausted your tightly-knit lookalike audience options, a broader source and greater degree of difference—layered with some of Facebook’s other targeting options—makes for phenomenal brand building through content boosting.

A few extra bits of information to keep in mind:

If you’ve got a ton of custom audiences in your account already, you should see a vast sea of blue audience names populate on this page; if not, it’s a clean slate. Regardless, click the blue “Create Audience” button above your columns and select “Lookalike Audience.”

This will bring up Facebook’s Lookalike Audience creation interface, which looks something like this:

Blank fields and sliders, how fun! It’s worth taking a moment to discuss what you’re looking at here.

The “source” field is the foundation of your lookalike audience. Regardless of what you’re using as your jumping off point—whether it’s a list of customer emails or website traffic over the last six months—make sure that it represents actual value to your business. 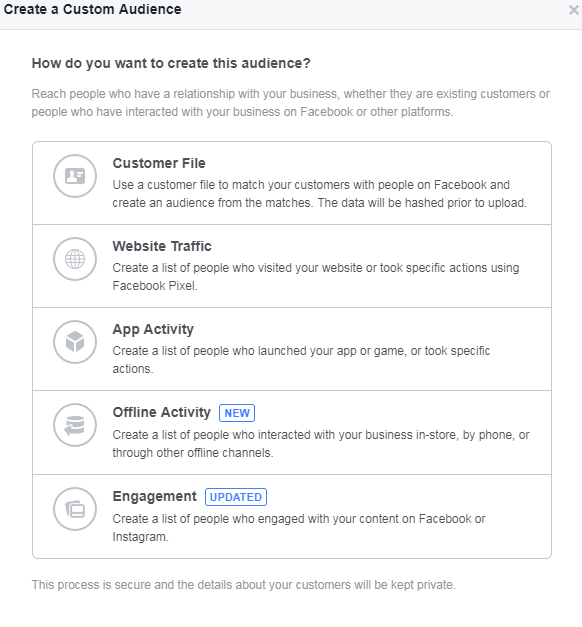 Potential sources for lookalike audiences include:

For example: if you choose to use website traffic to create your lookalike audience, don’t mirror users who simply visited your home page and nothing more. Instead, use traffic to high-value pages or folks who have completed a form fill as the source for your lookalike audience; while this will result in a smaller subset of similar Facebook users, the ones surfaced will be more qualified.

“Location” is exactly what is sounds like: where your lookalikes live. Currently, Facebook only allows you to choose from countries or regions (you can’t get state or city level granularity, but you can layer geotargeting on top of your lookalike audience when you put it to use).

Finally, we’ve got that “Audience Size” slider. This will show you how big your new lookalike audience is. It also gives you the ability to create multiple seed audiences from a single source.

Once your lookalike audience(s) is complete, create a new ad set and get ready to market to more qualified prospects!

Ready to Get Started with Lookalike Audiences?

If you’re using Facebook Ads, you should be using lookalike audiences. It’s that simple. They’re one of the most effective ways to derive immediate value from Facebook; they give you an immediate leg up on your comeptitors.

If you’d like to skip over the part of digital marketing where you contribute to white noise and, instead, focus on introducing your brand to interested prospects at the top of your funnel, implement them in your account today!