When the classic strategies aren’t delivering, you send in the guerrillas. They’re the extra-special forces – the ones that implement killer strategies to turn the tide and defeat the enemy.

Guerrilla marketing is a great alternative to traditional marketing. It thrives on original thinking and creativity, where imagination and ingenuity beat out big budgets.

Guerrilla marketing tends to be cheaper than traditional marketing, relying on smaller, more localized brick and mortar strategies like:

Graffiti marketing uses city streets and alleyways as a giant canvas. While smaller, more covert operations will make their mark wherever they want, for most businesses it’s recommended to get permission from a property owner before going Monet on the walls of their establishment. 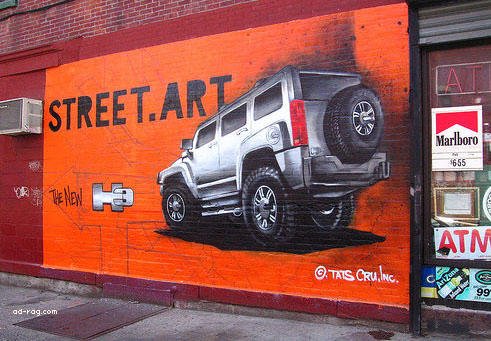 Stencil graffiti uses stencils to create repeated works of street art. The advantage of stencils is that you can create multiple instances of your art across many different spaces in a short period of time. Stencils tend to be small in size (as opposed to a full-wall mural) and consist of simple designs.

Reverse graffiti is when, instead of adding to a surface, marketers remove dirt and grime from a street or wall to create an all-natural marking message. Just put a stencil on a sidewalk and then wash the uncovered spaces!

Creative use of stickers is another great guerrilla marketing tactic that can be very successful when implemented well.

Also known as “stealth marketing,” marketers disguise themselves as peers amongst their target audience. One example is Sony’s campaign in 2002, in which actors were hired to wander about cities, asking strangers to take a photo of them. During the interaction, actors would rave of their cool new phone, boasting of its features and capabilities.

Want more traffic to your site? Get our free guide: 25 Ways to Increase Traffic to Your Website

Flash mobs involve organizing a group of individuals to perform a specific action or task at a pre-determined location and time. In some cases participants are hired actors, other times they are simply members of the community who enjoy the randomness of flash mobs!

Publicity stunts involve specific feats of awe and amazement, usually sponsored or in partner with a brand. Red Bull is very adept at this practice, exemplified by their 2012 skydiving record as part of their Stratos project. Red Bull sent Austrian extreme-sports athlete Felix Baumgartner above the stratosphere, dominating the world record for highest skydive, launching himself from over 128,000 feet above earth. Arguably much more than a mere stunt, the Red Bull Stratos project set numerous world records and was viewed live on YouTube by over 9.5 million users (setting yet another record).

Guerrilla marketing has some advantages and disadvantages. Take both into consideration before choosing to move forward with a campaign.

Confusion associated with guerrilla marketing campaigns can have extreme implications, such as in 2007, when flashing LED circuit boards promoting a new animated series, Aqua Teen Hunger Force, were quietly installed around the city of Boston. The objects were mistaken for explosive devices, causing citywide panic as bomb squads were brought in to examine and remove the unknown devices.

The hired installers were even arrested for mounting “hoax devices,” but were later released. While it’d be easy to label this campaign as a disaster, the story got picked up on major media networks across the country, so despite whole ordeal, some would probably call it a success.

There’s no doubt that guerrilla marketing can provide fantastic results while allowing marketers to exercise their creativity in a unique way, but it will only work for businesses who aren’t afraid of risk-taking.

Related: The 5 Best Marketing Campaigns We’ve Ever Seen (& How to DIY)

Axe Body Spray uses custom stickers attached to the classic “exit man” signs that are so commonplace in establishments everywhere. The added stickers create a story about the familiar exit man – and to think all this time we thought he was escaping from a fire!

Guinness adds small custom wraps to pool cues in bars, offering a clever reminder to pool players to grab a brew. This guerrilla marketing strategy is not just adorable – it also does a great job of targeting Guinness’s key audiences by working off of existing bar paraphernalia.

These unusual towels serve as not-so-subtle warnings to sun soakers tanning on the beach.

This sticker was placed on the floor of elevators, giving riders a taste of the Swiss Skydive experience.

Unexpected marketing on an elevator floor

An organization raising awareness of Alzheimer’s created an ingenious marketing strategy involving city maps. These free Hamburg city maps were given out at tourist booths. When users opened the map, they saw only a mess of unmarked, unlabeled road, mirroring the confusion and sense of misplacement associated with Alzheimer’s disease.

There’s no shortage of stairs in the world, and many genius guerrilla marketing tactics make use of staircases for their own benefit. This IKEA ad reminds users of how IKEA furniture works to save space in your home.

Guerrilla marketing on a public staircase

This guerrilla marketing campaign for King Kong 3D had people snapping photos and sharing their experiences on social media.

Guerrilla marketing for King Kong 3D on the beach

Similar to the elevator ad above, this ad for the Maximum Ride book series uses the edge of an outdoor staircase as a tool in their optical illusion. 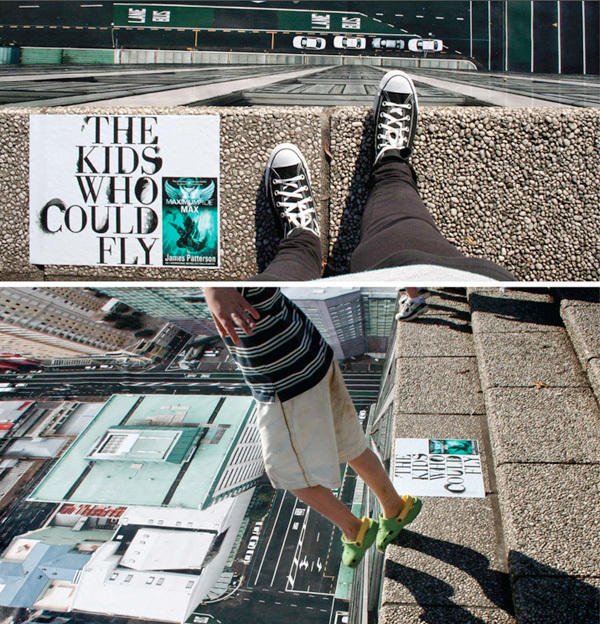 Hope you’re not scared of heights!

Crosswalks are another urban structure often used by guerrilla marketers. In this example, Mr. Clean shows off his cleaning power on a crosswalk.

Mr. Clean pulls off a great guerrilla marketing gag on a city crosswalk

National Geographic reminds users just how hard it is to capture that perfect shot.

This ad at the Nat Geo Museum also markets the magazine

Beau Rivage Resort Casino uses airport baggage belts to capture users’ attention as they wait for their luggage. It’s also another great example of audience targeting, as people who can afford to travel are good potential customers for a resort casino.

Casino and resort ad at the airport targets frequent travelers

Tyskie beer turns a regular door handle into a call for a cold brew.

Unicef reminds city-dwellers of the millions of people around the world who do not have access to clean drinking water.

Another great guerrilla marketing campaign from a nonprofit

Duracell adds their flashlight posters to illuminated areas, reminding users of the power of Duracell.

Cover Girl makes clever use of a city turnstile to mimic their Lash Blast Mascara application comb. (This example has to be my favorite!)

Cover Girl’s brilliant use of a turnstile to mimic a mascara wand!

Burn 60 makes creative use of a drawstring bag in this physical piece of guerrilla marketing. In an industry packed with false promises and big talk, the simplicity of this design sets it apart from other health and diet pill peddlers.

Another clever use of marketing to sell weight-loss products.

The Copenhagen Zoo covers a local bus in a custom design, which catches eyes all over the city.

This disturbing (but effective) guerrilla marketing strategy from Campaign Against Landmines uses restaurant ketchup packets to drive home the horrors of landmines and the injury to innocent victims in war-torn countries.

Note: Images in this post were borrowed from Creative Guerrilla Marketing, Creative Pool, Guerilla Freelancing, and Prosar. Check them out for even more examples.

As you walk home today, look at your surroundings and try to pick out the setting for your guerrilla marketing campaign – stairs, benches, and street corners could become your marketing masterpiece.

Do you have any favorite examples of guerrilla marketing we missed? Share your thoughts in the comments below!