We’ve made the case for controversial marketing in the past. Campaigns that rise above monotony, trigger a strong emotional response, and drive widespread engagement can experience unprecedented returns on investment. The name of the game—in advertising, as in most aspects of life—is balance. When does the incendiary become scandalous? When does gender targeting become sexist? At what number of Monday bathroom breaks, having already taken five, have you officially taken a sick day?

No matter the medium, these are the questions (the first two, to be sure) we marketers must ask ourselves before embarking on an against-the-grain, or an “out there” campaign. Luckily for us, there are myriad advertisers in recent history for whom abandoning the cookie-cutter has also meant abandoning common sense. Just the same, plenty of campaigns have found the line, toed it deftly, and enjoyed rampant success.

So the question remains: Where is the line? In the embarrassment of controversial ads we examined, we found two lines, delineating three distinct categories. We took the best of the best from each category, and voilà: 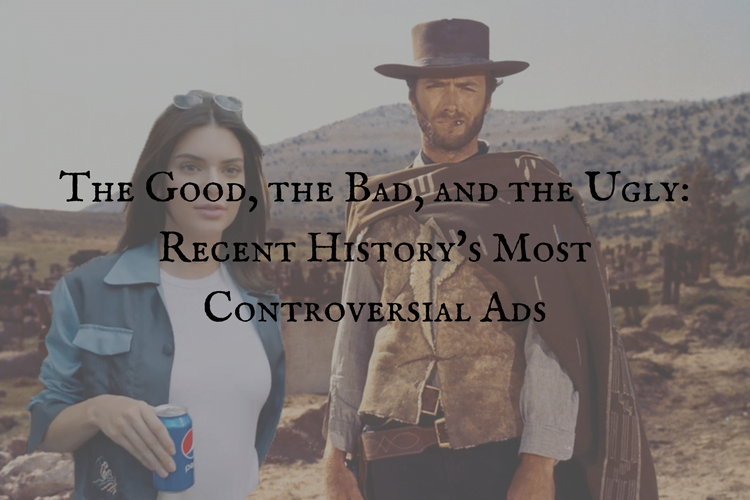 We’re a positive bunch of marketers here at WordStream. Let’s start with a nod to an “iffy” campaign that, in recent history, boasted great results.

Former CEO Andy Puzder has said that sexy burger ads saved Carl’s Jr. from obsoletion.“If you don’t complain,” he told Entrepreneur, “I go to the head of marketing and say, ‘What’s wrong with our ads?’ Those complaints aren’t necessarily bad for us. What you look at is…sales. And our sales go up.”

Football fans: you remember this one from Super Bowl XLIX. The suggestive looks. The epic lighting. The guy shaving ice who, when Charlotte McKinney walks nudely by, starts shaving ever more distractedly, ever more vigorously. 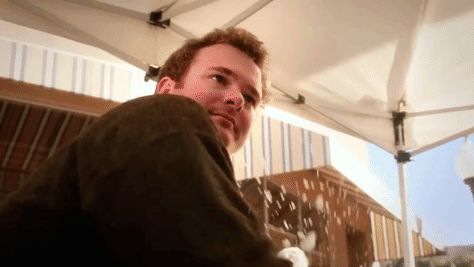 Hopefully though, you noticed something else about Ice Shaving Guy (ISG). He’s wearing a sweater. In fact, all the male voyeurs in this ad are wearing inexplicably warm clothing (on what is ostensibly a sweltering day). They’re also in various stages of cooling—besides ISG, there’s the guy in the flannel, working the hose…

and the guy struggling with an inordinate amount of bread (another cooling agent, think about it)… 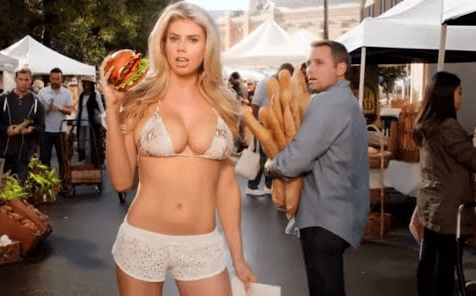 Which brings us to the first reason this ad succeeds:

So much of this is about drawing attention, which means creating contrast. For Carl’s Jr., contrast amounts to a pristine-looking McKinney making a collection of rough-and-tumble, overdressed men hot under the collar. It’s tough not to look at this ad and come away with the conviction that the goal here is to objectify Charlotte McKinney. Or that, if we’re being generous, Charlotte McKinney is objectified as a byproduct of the goal. To be clear: we’re not advocating for this. Used mindfully and as a technique, this kind of objectification is morally dubious at best, reprehensible at worst. In terms of efficacy, though, it succeeds because it…

“We got the attention of this demographic, young hungry guys, which was what our marketing and research department advised us to do.”

You can polarize people. You can even viscerally offend people. Just make sure your target audience comes away with the feeling you want it to associate with your product. The rest becomes an exercise in not getting the ad pulled, while simultaneously pushing the aforementioned feeling to its apex. Viewers who are not morally fond of your tactics, but who are in your target demographic (for Carl’s Jr, this writer), will most likely not hold it against your brand, or your product. At the same time, viewers who are more qualified—and, perhaps, less self-aware—may now experience primal arousal at the sight of a Carl’s Third-Pound Thickburger. And what about the Twitter chatter, the rhetorical analyses, the reactionary op-eds?

These all amount to (free) pyrotechnics in a laser show of fallout publicity. These viewers weren’t going to buy your product (in great quantities) anyway. Now, they’re going to help you sell it.

3. Clear and concise in its message

Here’s an ad that probably could have dropped its slogan and avoided controversy altogether. This Young Hungry Guy remembers being so riveted by the aesthetic (touché, Carl’s) that he didn’t really appreciate the message until further examination. If you’re not familiar with Charlotte McKinney, she is a model whose proportions could easily be mistaken for having been artificially manipulated, were it not for her notoriety as a model whose proportions have not been artificially manipulated. The slogan of the ad is, “The All-Natural Burger.” Bravo. 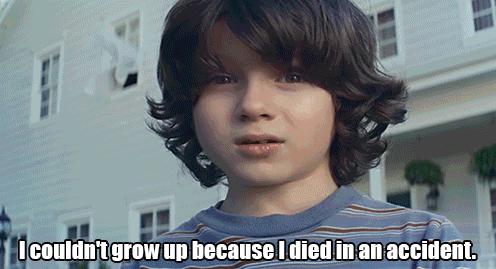 I couldn’t enjoy the Super Bowl uninterrupted, because Nationwide tried to sell me insurance

Affectionately coined “Dead Boy” by the Twitterverse, this Super Bowl ad evoked less shock and outrage than sadness and resentment. Of course, there were some among the 114.4 million viewers for whom sadness spilled over into annoyance:

The second I see a kid in one of these commercials I immediately assume they’re going to die. Thanks, Nationwide! #SuperBowl

“Boy” features what we might call an O’Henry ending from hell; think Sixth Sense, without the sense. The eponymous Boy, muss-haired and eager-eyed, spends the ad’s first 30 seconds doing all the things he’ll purportedly “never do”—ride a bike, get cooties, fly—because, spoiler alert (0:28), he’s dead. In terms of why this ad fails, well—that’s mostly all you need to know. But let’s take a closer look.

One analogous trope to a “ghost ending”—i.e., just kidding, character is dead—is a dream ending, and think of how annoyed you were the last time you saw one of those (looking at you, Alice in Wonderland). In Alice’s latest iteration, actually (2010, ft. Mia Wasikowska), the writers make some adjustments—Alice awakens from her dream an ever more confident and resolute person. This, as an audience, is what we like in our character arcs—growth, change, revelations, redemptions. Typically though, awakening a character from a dream in a fictive work’s ultimate or penultimate chapter/scene can be terribly off-putting for an audience. “You mean she was dreaming the whole time? What do we make of all that awesome stuff that just happened?”

This is essentially the effect of Dead Boy’s deadness—it’s not earned, and therefore neither is our sympathy. What we’re left with instead is a metaphysical gut-punch—provocation for provocation’s sake, a gross abuse of powerful ad space.

If you’re going to appeal to an emotion, don’t prey on it; if you’re going to prey on an emotion, don’t prey on fear—if not for moral assurance, then for no other reason than it’s easily detected and unbecoming (normally). Really though: fear is one of those emotions over which people hold relentless vigil. Think about that friend of yours who, in spite of the ratings, refused to see Get Out because it was partly a horror movie. To what end is our fear being used here? To sell insurance? Come on, Nationwide.

3. Ill-fitting in its ad space 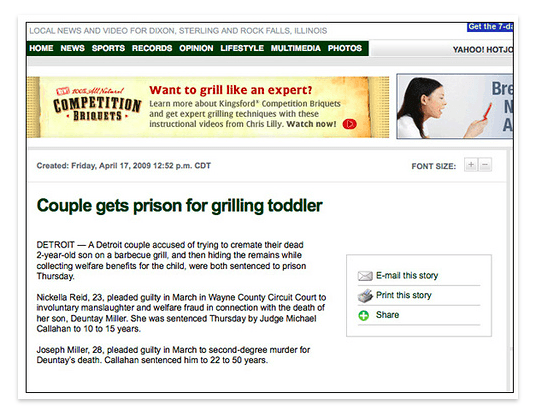 But this isn’t the Display Network—placement isn’t left to the discretion of keywords and algorithms. It’s the Super Bowl. You know exactly who’s watching it, what kind of mood they are/want to be in, and the general tone of the surrounding ads. So you know that, realistically, your audience may have just finished watching a baby project itself out of its mother’s womb for a bag of Doritos.

Appealing to those viewers who are afraid of losing their children to a freak two-story fall (see above meme: curtains billowing ever-so-subtly out of open window) just isn’t prudent targeting, even if you execute well.

Matthew Jauchius exited Nationwide a little over two months after making this statement; this after being with the company for nine years. Here’s what we can learn from his demise:

Taking the moral high ground when you’ve already offended millions of people is going to come off condescending—or worse, disingenuous. A public statement should be approached like an attempt at reconciliation with a significant other; your relationship with your audience is just as delicate. Simply put, there’s no winning here. Take the loss, apologize, and move on. You’ve already spent an average of $160,000 per second on Dead Boy’s on-air existence. “We did it for the kids!” 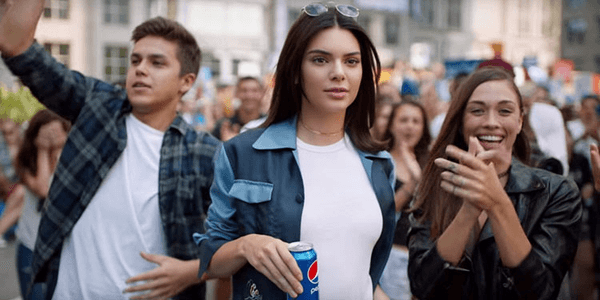 So listen: What would you say if I told you that for over 100 years, nearly unencumbered, a brand sold exclusively heart disease, obesity, and otherwise indigestible hoo-ha, sold it well, and then one day, that same brand tried to remarket itself as the solution the single biggest social injustice that occurred in all 100+ years of its unexamined thriving? Hubris? Never happened? Nothing could be worse than peddling heart disease?

Hubris indeed! We were willing to leave Pepsi well-enough alone until the prodigal daughter of the family “famous for being famous” reached out a well-manicured hand and pseudo-satiated the Black Lives Matter movement. Let’s not throw stones from afar, though. 3 reasons this ad fails:

Who else but Pepsi would have the clout to take on social inequality? Seemingly an answer to Coca-Cola’s 1971 “I’d Like to Buy the World a Coke” (created by Don Draper, don’t tell us otherwise), the Jenner ad can also be viewed as an example of brand insecurity—i.e.,“Coke took a crack at the iconic, why not us?” Thing is, harmonious hilltop singing doesn’t quite aspire to the level of social action that Pepsi’s going for. Perhaps if the singing had been directed at a collection of anti-Vietnam protesters, and had they been thus appeased, Pepsi would have had an apt model.

Even an ad with a completely nuanced understanding of contemporary social movements can seem like it’s pandering (and it probably is). That’s why, if you’re going to appropriate these movements, you better nail the tone. The protesters in this ad, even before Jenner breaks the ice, are smiling and dancing. You know, the stuff you’ve come to expect from Black Lives Matter rallies/protests.

Really, though: if that’s how you want your ad to look, and if we’re going to think in terms of monetizing movements: can’t we think of a more celebratory, less violent one than this? It’s as if the people at Pepsi just went with what was topical (not the worst strategy, generally, though here, clearly, it is). 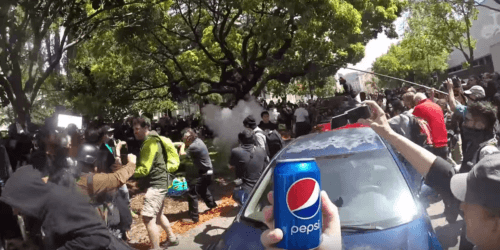 A man attempting to break up a riot with a Pepsi.

3. Didn’t get a second opinion

It has come out, since the ad’s inception, that all of the members of the creating body were white. Assembling a collection of like-minded individuals is no way to do anything creative, but especially if you have concerns about marginalizing or offending a portion of your audience: get second, and third, and fourth opinions, and get them from an eclectic range of creatives. Otherwise… 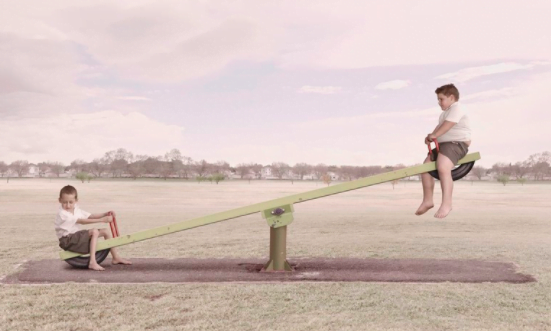 Gordon Donnelly is an SEO jedi who proudly honed his chops at WordStream for 5+ years. Today, you’ll find him in a hockey rink, on a mountain, or at home in Boston, building Triple Whale’s world-class e-commerce analytics platform.

See other posts by Gordon Donnelly