Last August, we broke down the 11 best competitive ads we’ve ever seen on Google. Although bidding on your competitors’ brand names is an effective strategy in and of itself, it’s just one iteration of broader marketing approach known as comparative advertising. 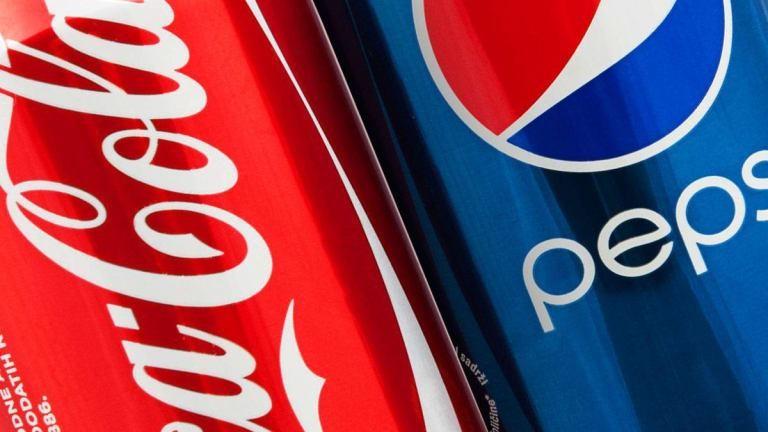 I’ve got plenty of examples to share with you all. But first, I think it’s worthwhile to discuss the why of comparative advertising.

Well, I sort of answered this question in the introduction: Like all marketing strategies, the goal of comparative advertising is to communicate the value of whatever product or service you’re promoting. Though it may seem as if some big name brands use comparative advertising strictly to entertain people (e.g., Wendy’s repeatedly tweeting about McDonald’s use of frozen patties), the true purpose of the strategy is to communicate value. Wendy’s wants you to laugh, but they also want you to associate their food with freshness.

Comparative advertising gives your audience an anchor—something concrete, something they can use as a reference point to better understand the value of your product or service. If you’ve never heard of Perfume A, being told that it’s “good” might not mean much to you. But if you’re already familiar with Perfume B, being told that it’s inferior to Perfume A might make enough of an impression to get you interested. Comparative advertising allows you to capitalize on the recognizability of your competitors’ brands; it allows you to turn their market share into an asset.

One last point before I move onto the examples: There’s nothing wrong with entertaining people. According to a 2018 Clutch study, 53% of consumers remember ads that make them laugh. Humor is an effective way to make your messaging stick, and engaging in comparative advertising gives you plenty of opportunities to get your prospects chuckling. Should writing the perfect punchline take precedence over communicating the core value of your product or service? Of course not. But being funny and being memorable aren’t mutually exclusive.

On that note, let’s look at some real-world examples of effective comparative advertising.

As you’ll notice, each of the advertisers highlighted below is a big name brand with a big name brand budget. Just because you don’t have the resources that they do, however, doesn’t mean you can’t learn from what they’ve done. Across these ads—which, again, come from several different media—the common lesson is that you can communicate value by asserting your advantage over the other businesses in your vertical.

What better way to kick off this list than with arguably the most famous comparative advertising campaign of all-time? For those who don’t know, Apple once promoted their Mac computers by running a series of TV commercials that personified the Mac and the PC in hilariously different ways—the Mac being laid-back and charismatic, and the PC being dorky and overwhelmed.

In one of the commercials shown above, the PC is sick with a virus—something Macs are immune to. As the PC sneezes, blows his nose, and eventually passes out, the Mac—portrayed by America’s sweetheart Justin Long—remains cool, calm, and collected. In addition to letting viewers know that Macs are impervious to viruses, the ad cleverly suggests that using a Mac is an easy way to become cooler.

Though this Verizon ad is (clearly) from the pre-smartphone era, it’s still worth watching and discussing. As a Verizon customer walks through his college campus and enjoys playing online games and watching YouTube videos, an AT&T customer is frustrated by his lack of access to 3G coverage (like I said: pre-smartphone). As this scenario plays out, the narrator repeats some memorable wordplay: “There’s a map for that.” The message? A map showing Verizon’s 3G coverage is far more impressive than a map showing AT&T’s 3G coverage.

3. Allstate vs. everyone else

Though perhaps not as overtly comparative as Apple’s Mac vs. PC campaign, Allstate’s wildly successful Mayhem campaign is an example of comparative advertising nonetheless. Taking a page from the Apple playbook, Allstate uses a human actor to personify a non-human entity—in this case, the non-human entity is mayhem. The overarching message of the campaign is that Allstate insurance is the smartest (most effective) choice in a world that’s unpredictable.

In this specific example, Mayhem—portrayed by Dean Winters—blocks a woman from seeing the pick-up truck in her blind spot. An accident ensues, and Mayhem warns the audience that having “cut-rate insurance” means paying for accident damage out of pocket. Therein lies the comparative element of the campaign: Mayhem is Allstate’s way of comparing themselves to lower-tier competitors.

Here, we have a TV ad run by Miller Lite in response to a controversial Bud Light campaign. In the weeks leading up to this counterattack, Bud Light made headlines with the claim that their beer is healthier than others (e.g., Miller) due to the lack of corn syrup. Bud Light’s rivals did not take kindly to what they perceived as slander, of course, and Miller went so far as to parody their competitor’s infamous campaign.

The 30-second video takes place on the set of a Bud Light ad. When the director calls “Cut!” and the actors break from character, a few members of the cast and crew head to their tent to share a couple beers. Rather than opting for Bud Light, however, everyone grabs a Miller. As they chat, the audience is shown a simple message: 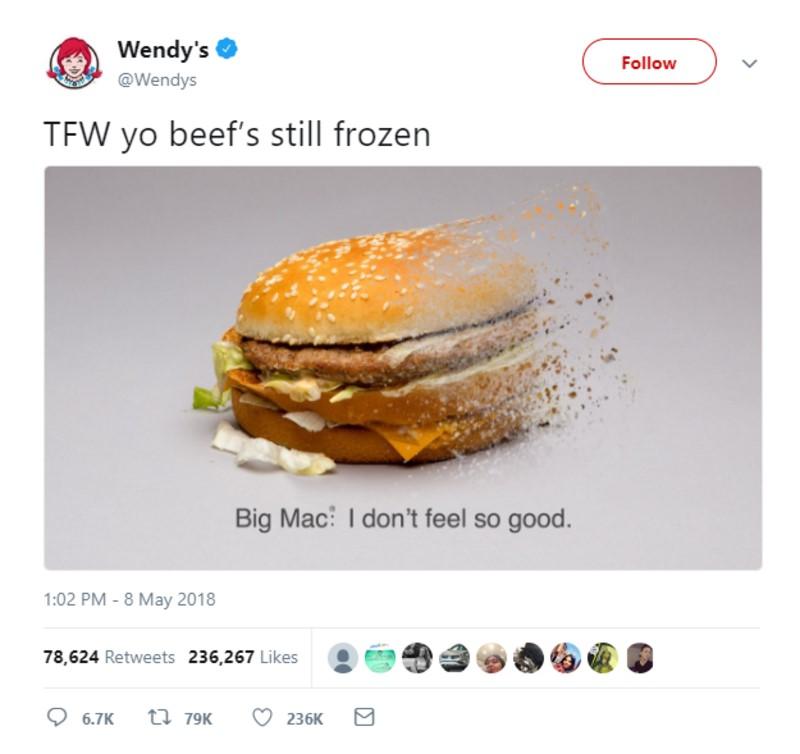 We interrupt this litany of TV ads to bring you a different form of comparative advertising: a tweet. In the wake of Marvel Studios’ Avengers: Infinity War, Twitter was overrun by memes related to the film’s ending (spoiler alert: Thanos turns half of living creatures into dust). Known for their light-hearted and unpredictable online presence, the social team over at Wendy’s couldn’t help but get in on the action.

The result? A destined-to-go-viral tweet that shows the McDonald’s Big Mac turning into dust. Although that image would’ve been funny (and topical) in and of itself, it was the caption that truly sent this thing over the top: “[That feeling when] your beef’s still frozen.” For those who don’t keep up with the goings on of multinational fast food restaurants—probably for the best—Wendy’s has built their brand around the use of fresh (i.e., never frozen) beef. In this case, they chose to communicate that message by way of comparison to McDonald’s.

Jam-packed with hilarious digs at iPhone fanatics, this ad for the Samsung Galaxy II is my favorite example of comparative advertising. As they wait in an outrageously long line for the debut of the new iPhone—this is implied, as the words “Apple” and “iPhone” aren’t said—Apple customers are blown away to meet people on the street who are using a different kind of smartphone: a Samsung.

As they marvel at the size of the Galaxy II screen and fantasize about the convenience of 4G speed, the Apple loyalists begin to realize that alternative devices have plenty to offer as well. To bring it all home, the 60-second video ends with a simple but powerful message: “The next big thing is already here.”

7. Dove vs. everyone else

Like Allstate, Dove opted to compare themselves against a nameless amalgam of competitors rather than a specific rival. The message is simple and memorable: Whereas lesser lotions treat your skin harshly, Dove treats your skin with care. The inclusion of barbed wire, of course, is intended to drive the point home.

There’s something to be said about following in the footsteps of Dove and Allstate. When you go after a single specific competitor, there’s a greater chance of some consumers perceiving your marketing as malicious. Being perceived in this way can have disastrous consequences, as the negative connotation forged in your prospects’ heads may overpower your messaging entirely. Alternatively, going after an anonymous combination of competitors allows you to retain a good reputation while still communicating your value as a business in a memorable way.

If you must go after a specific competitor, it helps when a large proportion of their customer base is united by a common frustration. Case in point: Popeyes’ recent shot at industry rival Chick-fil-A. The latter restaurant, for those who don’t know, is (in)famous for being closed on Sundays. As you can imagine, many fans of the Chick-fil-A menu are disappointed when the final day of the week rolls around and they’re unable to buy their favorite chicken sandwich.

Brilliantly, the marketing team at Popeyes noticed that National Sandwich Day 2019 fell on a Sunday and quickly went to work. In the ad shown above, a man walks up to a highway sign advertising nearby restaurants and prints the words “Open Sunday” underneath the Popeyes logo. Directly to the left, of course, are the words “Closed on Sunday” underneath the Chick-fil-A logo.

Now that is a strong value proposition: “Our biggest rival is closed, but we’re still open. Come on by and enjoy a delicious chicken sandwich.”

We’ll wrap up this guide to comparative advertising with another example from Twitter. Last Halloween, BMW racked up tens of thousands of retweets and likes when they poked fun at rival auto manufacturer Mercedes-Benz. As you can see, the tweet features an image of a Mercedes-Benz sports car wearing a BMW costume. The punchline, naturally, is that the BMW is a superhero to the Mercedes. Every Mercedes wants to be a BMW in the same way that every kid in New York City wants to be Spider-Man.

Like the folks at Wendy’s, the BMW social team does a great job of keeping things light-hearted while still asserting themselves as the superior brand. You may think that a tweet like this does nothing more than make people chuckle, but remember this: 53% of consumers say they remember funny ads. If you’re trying to make a strong impression, taking a page from the BMW playbook might not be such a bad idea.

See other posts by Conor Bond