Megan Marrs
Last Updated: November 19, 2021 | Social Media
Home — Blog — 6 Accounts to Follow on Pinterest (And What You Can Learn From Them)

Whenever you are looking to improve or gain mastery in a particular area, it is always smart to carefully examine the practices of those who are already doing a top-notch job. You can learn so much just by picking the brains of existing experts – our ongoing Ask The PPC Experts interview series continues to be popular. Social media networks like Pinterest are no exception – looking at how others successfully use social media in a creative way will help you spark your own masterful ideas.

Today we are looking at six unique Pinterest accounts and assessing what these Pinterest users are doing that sets them apart from the pack. Learn from them, and you’ll probably witness improvement. With better referral rates than Google+ LinkedIn, and YouTube combined, Pinterest is a social media network you can’t afford to leave stagnant!

With over 11,000,000 followers, Joy Cho is the #1 most-followed Pinterest account. Joy Cho has a background as a designer and blogger, and her extravagant popularity is remarkable. Joy Cho has a pretty high number of boards – 82, and all segmented into specific categories. Creating multiple boards with narrow topical focus is a key mark of success on Pinterest.

Below is an example of some of Joy’s very specific, niche boards, with one board dedicated entirely to packaging.

Joy Cho also follows another important Pinterest best practice: high-quality images. She is also a very active user, making an effort to pin something several times every week, if not every day. Regular, consistent activity is key to any social media marketing. Take some pointers from this Pinterest power-user!

The #2 Pinterest account is Maryann Rizzo, an interior designer. Maryann has gorgeous collections of pins, with great emphasis on aesthetics. Some of her boards boast an impressive number of pins – one board has over 3,000 pins!

Maryann does a great job of demonstrating her knowledge of interior design. Rather than only showing homes she has personally designed, this Pinterest superstar mixes interior design elements that she envisions would work well together.

It’s also key to note that Maryann includes a generous number of boards dedicated to design references, DIY crafts, and instructions. DIY & Crafts is the #2 most popular category on Pinterest, followed by Home Décor at #3 (#1 is Food & Drink – and wouldn’t you know it, Maryann has multiple boards for that topic too), making Maryann in her element on Pinterest.

While conventional wisdom purports Pinterest as a fantasyland of window shoppers, observing the most popular pin topics reveals that such thoughts are fallacious. The top categories show that the majority of pinners seek to make the alluring visions found on Pinterest realities, dedicating attention to categories where success is real and mimic-able – fantastic food recipes, experimental crafts, and décor ideas that are all within reach of the average woman (the dominant gender on Pinterest).

What does this mean? It means that the most successful pins empower the pinner: give them tutorials, how-to guides, instructional videos (yes, you can pin videos); let them eat (and make) that Angry Birds inspired cake.

Mashable does an excellent job of knowing its readership, and reflecting their audience’s interests back to them in its Pinterest account. Mashable has Pinterest boards that you’d expect from a site dedicated to social media news, like Tech & Gadgets and Web Humor, but also features boards dedicated to topics like Star Wars and Nerd Weddings. It’s boards like those that help flesh out a brand’s personality and character.

Despite ranking in at #88 (according to Pinterest statistic site Repinly) for most followed Pinterest accounts, Mashable is one of the most popular brands on Pinterest. Mashable deals with cutting edge social media happenings, so it’s no surprise that they are pulling off Pinterest quite well, hosting Pinterest sweepstakes and boasting over 230 pins of visual eye-candy infographics.

Additionally, Mashable knows that these days you need to be more than just a pretty face to get ahead in social media – besides delightful pictures, Mashable also pins cover photos that link to practical resources, such as “5 Essential WordPress Tips for Beginners” and “A Beginner’s Guide to CSS.”

This is another Pinterest best practice: while aesthetically alluring photos are Pinterest’s bread and butter, guides and resources are incredibly valuable and popular as well. It’s key to think about Pinterest as a bookmarking tool as much as an image sharing site.

When pinning guides, create an eye-catching image that serves as a title page, usually with a bright backdrop and large lettering. Also make sure your link leads to the actual e-book or resource.

Peugeot Panama, while lacking the sheer number of followers compared to our other Pinterest power-houses, exemplifies the possibilities that can be explored by using Pinterest creatively. Peugeot Panama hosted a puzzle contest in which contestants were asked to search for four missing pieces of a Peugeot Panama photo. The missing pieces were stashed around the Peugeot website and Facebook page. Participants would find the missing puzzle piece photos and pin them to complete the board. 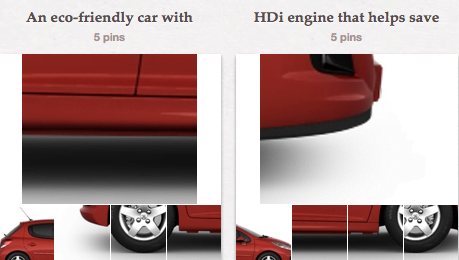 Part of the process required contestants to share the pinboard by adding Peugeot as a contributor. Since this required participants to follow Peugeot, it increased their Pinterest following significantly. Peugeot also made a point to engage users by encouraging them to participate, and promptly answering any questions contestants had.

The Peugeot Panama puzzle contest is a prime example of using Pinterest creatively. Contests and sweepstakes are always a great idea, and when combined with some exciting outside the-box brainstorming, you can generate unique and unusual contests that are more likely to grab and engage users.

Salesforce brings a lot to the table when it comes to fantastic Pinterest use. They have a lot of great pinboard ideas like Customer Success Stories linking to video content and Great Reads, featuring business book classics like “7 Habits of Highly Effective People” and fan favorites such as “The Hunger Games.”

This board is really fun and gives a nice sense of Salesforce’s personality as a company.  Rather than using it simply to engage with customers and prospects, they’re using it to attract potential employees.

Lonely Planet’s Pinterest account, in addition to following some of the success markers we’ve already discussed, features a “Travel Quotes” board, packed with inspiring words of wisdom for those who love to make tracks.

It’s a smart idea to include a quotes board in your Pinterest account. This may seem a bit counter-intuitive; one might imagine that since Pinterest is primarily an image sharing site, word-plastered art wouldn’t have a place on it. Recently though the very opposite has been true – short, sweet snippet quotes and sayings have overrun Pinterest.

This unexpected phrase-fanaticism led Pinterest to create a new “Quotes” category in July that didn’t exist at the social media site’s inception. Repinly estimates that the Quotes section accounts for around 10% of Pinterest’s traffic.

As noted in a New York Times article documenting this phenomenon, it was the resurgence of an old 1939 British propaganda poster that began this quotation trend. Ever since “Keep Calm and Carry On” took off, pinners have been hoping that their witty words will become the next big thing.

In a culture of ever-shrinking attention spans, these easy to scan and digest sayings offer a moment of inspiration and confirmation. As Alex Williams of the New York Times notes, “such pop-philosophy quotes, which seem to emanate from design-driven corners of the Web, serve as a form of group therapy on Pinterest.” Commiserate with the masses!

The quote image format is easy enough to re-create with even the most basic image-editing software. Create your own pithy sayings (as long as they can relate to your business in one way or another) and see how they sail.

Pin E-Books, Guides, and Resources – Think of Pinterest as a bookmarking site, not just a dumping ground for photos (even if they are drool-worthy).

Get as Specific and Interesting as Possible – Just as with organizing your PPC campaigns in AdWords, grouping and segmenting is key. Vague boards can end up being generic and uninteresting to users. Instead, get as narrow as you can. For example, instead of a “Cars” board, consider a “Ford Model T” board. Your uniquely titled inspiration-collaged-idea-masterpiece will stand out more against the bland boards of others.

Pin Videos – Yes, you can pin videos, and yes, you should! Although you don’t see many videos on Pinterest, videos often drive better engagement that pictures. Posting videos is a great way to get your videos noticed in an under-appreciated category.

Use the Quotes Board – As quotes and sayings rise in Pinterest popularity, grab a piece of the pie by pinning fun quotes relevant to your industry, and try your hand at creating your own quote-images.

Post Event Photos – Pinterest is a great place to post photos from your latest company events. Event pictures offer followers an inside glimpse of your business happenings and personality. You’re probably already taking these for Facebook, but drop them here too.

Comment – There isn’t a whole lot of commenting going on currently on Pinterest but that doesn’t mean you shouldn’t do it – in fact, because so few people comment, yours will be more noticeable and stand out. Whether it’s on Facebook, Twitter, or Pinterest, engaging in conversation with users is always a smart strategy.

Show Off with Testimonials – Create a “success stories” or “testimonials” board to show why your clients and customers love you. They do love you, don’t they?

Link to Other Social Media Accounts – Many of our highlighted Pinterest users link to their other social media accounts – this makes it easy for users to check you out on other platforms. You also have the option of having Pinterest post your activity through your other accounts, but use that option with discretion to avoid spamming your pals.

Meet the Team Board – Having an employee or “meet the team” board like the one showcased above from Salesforce allows customers to pull back the veil and see the faces and individuals behind the brand. Seeing that your business does in fact have real, live humans reassures visitors and helps cement relationships between clients and employees.

Feature Your Clients – One great pin board idea is to have a board dedicated to your clients of the month. Featured clients will be sure to share their recognition with others.

Know Your Audience – In one sense, this means pinning images that are appropriate to your brand identity. But you should also keep in mind that Pinterest is composed of 80% women users. Catering a bit to female sensibilities isn’t a terrible idea.

Measure Success – There’s a wide array of analytic tools to measure your progress on Pinterest. Some favorites include:

Advertise — Sponsored pins and Pinterest video ads could be a lucrative option depending on your industry and audience.