Find Your Old Tweets: How to See Your First Tweet

Can’t remember what your first tweet was? It was probably “Hello world!” or “Is this thing on?” or “I finally joined Twitter, am I doing it right” or “Twitter sucks,” but if you want to know for sure, you’ll need to dig back into your archives.

Unfortunately, Twitter only displays your last 3200 tweets in your timeline, so if you’re anything like me (I’ve been on Twitter since May 2009 and have well over 40,000 tweets), that won’t cut it.

Here are the two easiest ways to find your oldest tweets, including your first tweet. (I promise these work – a lot of the methods and tools you’ll find in the Google results don’t.)

How to Find Your Old Tweets Using Twitter Search

Open up Twitter.com and go to the search bar:

Type in the following string but with your username and the date range you want to look at:

So, for example, if I want to see all my tweets from my first month on Twitter, I’d insert:

This will show you your earliest tweets – but note that the default view is of your “Top” tweets; click “Latest” to see every tweet from this time period. 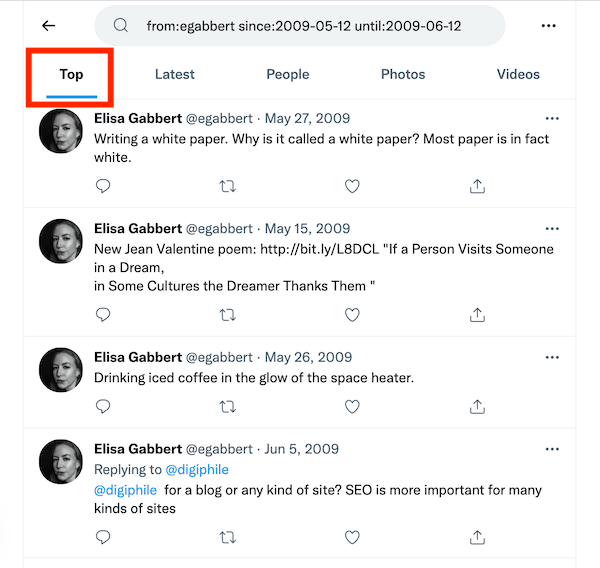 Scroll to the bottom and ta-da: There’s my first tweet! 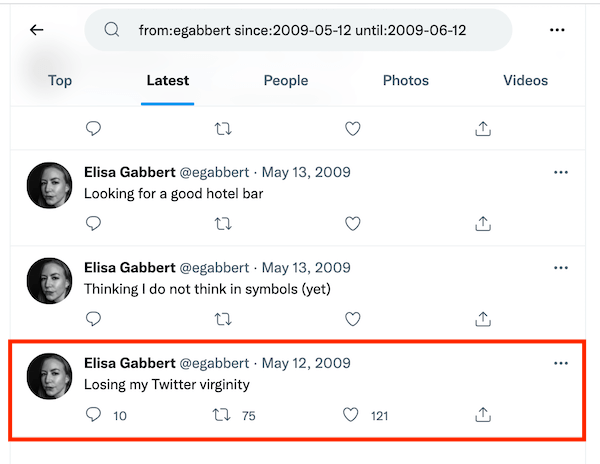 You can also use Twitter’s own Advanced Search feature to search your old tweets. Go to https://twitter.com/search-advanced or just click on “Advanced search” on the right.

and enter your username into the “From these accounts” field under “Accounts.” 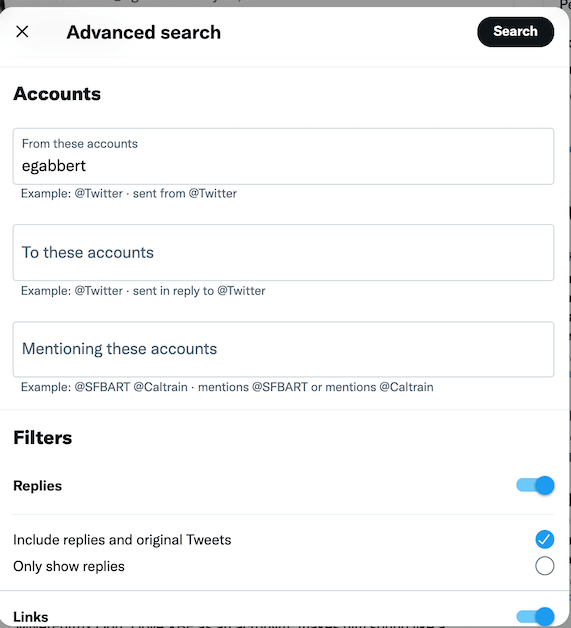 Then use the calendar tool to section a start date and an end date, like so: 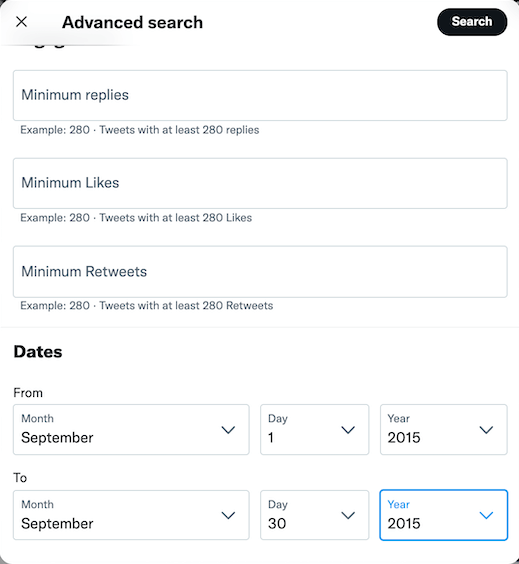 Then click the “Latest” tab to see all your tweets from this data range. Ta-da! 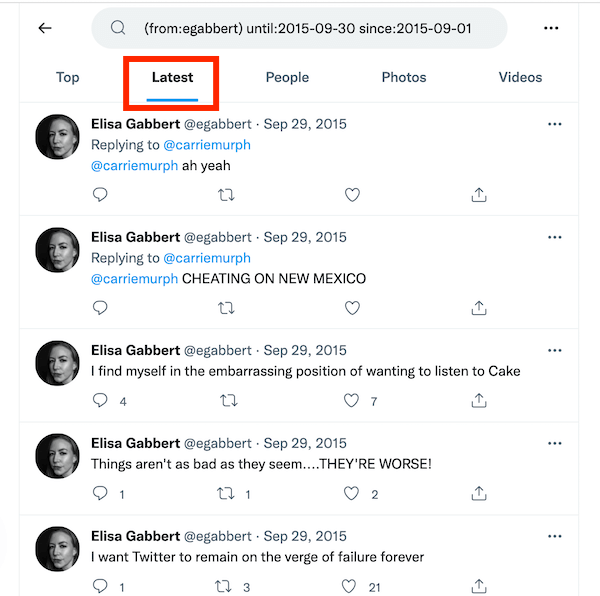 Note that there used to be a few other third-party tools that helped you search your old tweets but most of them have been shut down. The two above methods still work!

Now for a little palate cleanser … some famous first tweets.

I looked at the first tweets from everyone on the Top 100 most followed list, and let me tell you, the rich and famous can be pretty boring. Here are the first tweets that made me smile/laugh/cry:

First up, Lady Gaga – she starts off great, but …

She didn’t quite grasp the 140-character limit yet, bless her heart. But at least Gaga typed that tweet in herself. Britney’s team didn’t get the memo that celebrity tweets are supposed to be in the first person:

Welcome to Britney Spears’ Twitter! Follow the latest in Britney news and get updates straight from Britney and her entourage.

I expected better from Ellen DeGeneres, but at least she didn’t say “Is this thing on”:

Pink’s first tweet was actually funny! And only got 42 favorites, for shame.

i have officially entered the 20th century. i mean the 21st.

But the second one was good:

A picture icon will come when I get to a computer!

Eminem’s first tweets are creeping me out:

We’re the ones that made you… Tuesday.

im super new to this twitter shit but wudup tho !……….follow me biot¢h……….wudup mak……happy bday LO……8 days of freedom..ym

Paris Hilton’s first tweet was definitely “on brand” … but only got 2 favorites and 4 retweets?! Where were the fans?

in Vegas at the Hard Rock with my Prince…

Oh Tyra! Tellin’ it like it is, just like on ANTM (y’all KNOW I watch that show):

been sitting here for 30 minutes trying to figure out a clever first tweet. still thinking…

Love ya Kanye but that’s not how you spell Silicon Valley (unless he’s making a witty pun about somebody’s cleavage?):

He appears to have seen the error of his ways and deleted this tweet.

Just for fun, I checked out first tweets from a few of the most followed accounts in search marketing.

fed the cats. they were hungry!

Here’s a man who knows that all the Internet really cares about is cats. UPDATE: Matt Cutts informs me that his first few tweets were part of an April Fools joke; Danny Sullivan set up a fake Twitter account for him. His real first tweet was:

Rand Fishkin’s first tweet was about writing a presentation for SMX (snooze), but props for working a Goonies reference into the second:

Geraldine & I are in Astoria – following the Goonies trail & skipping Gnomedex. I wish I could say I felt guilty about it…

Seth’s Blog: How to answer the phone http://tinyurl.com/6pamxs

Just what we need – something to waste MORE time online. Yippee.

Meanwhile all Aaron Wall could think about was rankings!

yippy. we got our twitter username seobook. I wonder if this will rank as well for seo book as our other one ranks for aaron wall

And finally, the first tweets from our own Larry Kim! CLASSIC:

i am trying to figure out how to use twitter

i am amazed by the awesome power of twitter

Ha! And Larry taught me how to use Twitter!

just setting up my twttr