Yesterday I was walking through Boston when I came across quite an unusual scene – a huge golden heap of Butterfingers smack in the middle of Copley Square. What kind of sorcery is this?  I thought as I stared in awe at the giant mound of crunchy candy. Several people stood around the pile, gingerly picking up a candy bar here and there. But after about 30 seconds, kids swooped down in hordes, cramming piles of bars into their backpacks in sheer ecstasy. I snapped these photos to document the event: 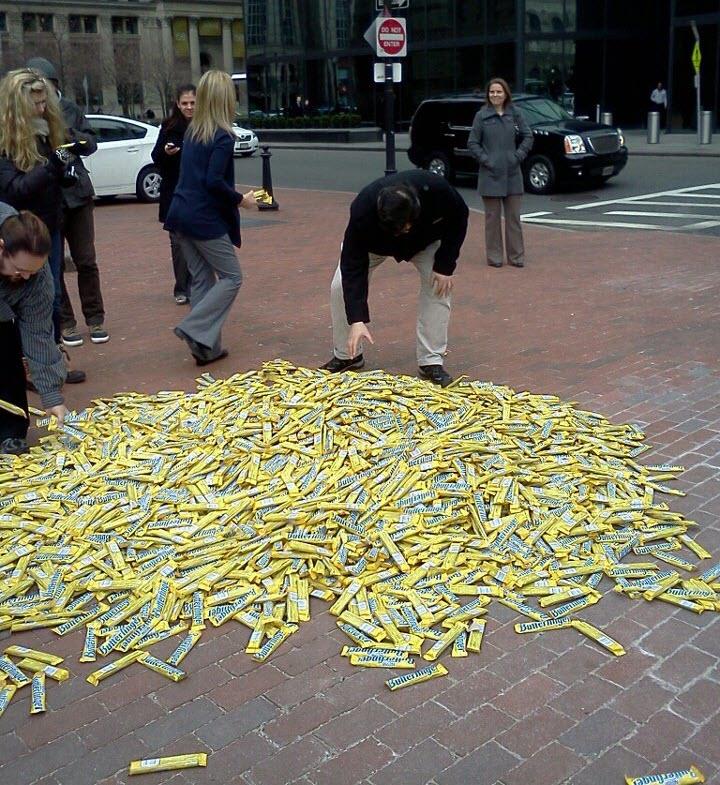 Upon closer examination, this was no glorious miracle, but actually a clever advertising ploy by Pawngo, an online pawnshop business and apparent Giants fan. Their candy bar jab gives new meaning to “bittersweet.” I wasn’t beyond cramming some into my pockets before leaving though.

I had never heard of Pawngo before, but they got their name out in a clever and original way. Now ordinarily a giant pile of Butterfingers appearing in downtown Boston would certainly attract notice, but the sly post-Superbowl insult made the prank that much more worthy of attention.

Pawngo used their environment (Boston suffering after a Patriots defeat) to their advertising advantage. Here are some other unique examples of advertising that take advantage of setting and environment.

This recent McDonald’s seed bomb ad was designed by Sean Click. It’s certainly a unique idea, brightening up those dirty freeway shoulders with some colorful logos. But what makes the ad superbly innovative is Click’s premeditation regarding the ad’s geography; the flowers are California Poppies, the state’s official flower, which are illegal to dig up. So it’s actually illegal to destroy this McDonald’s ad –pretty incredible.

Using seed bombing as an advertising method is a really cool and original idea, and I’d be interested in seeing it pushed further. Makes me wonder what it would be like if dandelions were Massachusetts’s state flower…

JobsinTown’s poster ads, perfectly placed on the sides of washer/dryers

Jobsintown.de is a German online recruitment site, and their collection of smartly placed poster ads immediately catch your attention. There’s a bit of child-like wonderment attached to these ads, as we are reminded of younger years, imagining little men pushing out money from inside ATM Machines and gremlins popping out soda cans from vending machines.

For this ad campaign, Domino’s experimented with reverse graffiti, in which detergent and water is washed over a carefully placed stencil, resulting in a contrast between the dirty street and clean stenciled spots. Non destructive, eco-friendly, and original!

Axe theorizes that the white running man we often see guiding us to emergency exits isn’t running from a burning inferno, but in fact a pack of lust-driven ladies, crazed by the escapee’s Axe scent.

Graffiti is a great form of street art, but legal issues tend to steer most businesses away from spray painting their brands across buildings. The Milwaukee River Keeper organization created a clever design that incorporates the waterway’s spouts as art elements for a design that directly links the message with the physical surroundings. 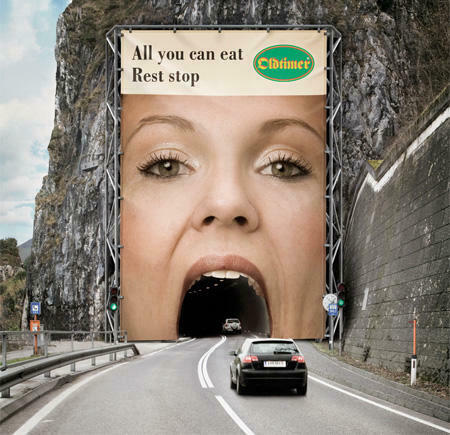 I find this ad for Oldtimer, an Austrian chain of motorway rest stops, quite terrifying. I can’t help but think this might even be a safety hazard. It’s certainly a great example of using your surroundings in advertising though.

7. FedEx Trucks Are One Step Ahead

FedEx’s brand is almost entirely dependent on their big white trucks. FedEx knows how iconic their trucks are, and what a great tool they can be for experimental advertising.

Do you have any ideas for using your environment to craft advertisements that stand out? How can we implement this creative mindset for online ads?