Let’s face it, the internet is full of clowns and jokers.

While Amazon is largely a site of purposeful, insightful reviews, under the darkness of night you may find it transformed into a local comedy club, full of amateur stand-ups looking for a laugh. Plenty of folks employ Amazon consumer reviews to poke fun at some of the outrageous products found on the web in a movement dubbed “customer review comedy.”

Today we’re giving you the top 10 funniest Amazon products and their hilarious reviews.

Arguably the most popular Amazon internet joke is the Three Wolf Moon Shirt. Since its introduction onto Amazon in 2008 it has gone on to earn over 2,790 reviews and has become its own meme. The shirt’s viral explosion increased the shirt’s sales by 2,300%. The reviews may be for laughs, but there’s nothing funny about those numbers baby!

And to think – you thought two wolves were great! But three? Am I in paradise? Reviewers are in awe of this t-shirt’s mystical wonders.

The Three Wolf Moon meme is one of the most well-known internet insider jokes, spawning fan tributes like…

The most popular Three Wolf Moon Shirt review comes from a user explaining how wearing his Three Wolf T-shirt turns him into an instant babe magnet. 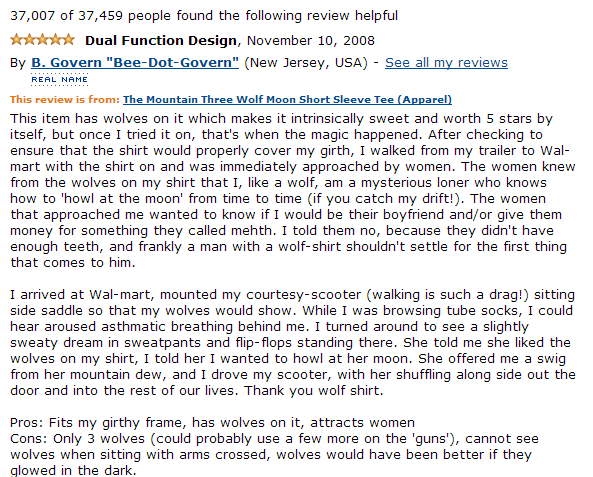 This funny Amazon review is so popular that it serves as the inspiration for a popular College Humor spoof, Mountain Dew and all.

Tuscan Whole Milk, 1 Gallon, 128 fl oz – there’s something poetic about it, is there not? Other Amazon reviewers certainly think so, giving it a 4 star rating despite its inflated dairy pricing of $45.00. Ingredients listed: “secret.” This strange Amazon product has earned a host of comical reviews.

One reviewer crafted a fantastic Edgar Allen Poe-inspired ode to Tuscan Whole Milk, one of the best reviews on Amazon. Below is the beginning – read it in all its glory.

It’s hard to say whether or not Bic’s idea to create a line of pens dedicated to the needs of the fairer sex (slimmer design and – oh my heavens – such pretty colors!) was a joke at conception; one can questions whether they were ever intended to be taken seriously. Whatever the reasoning behind their initial release, the Bic’s For Her Ball Pens quickly rattled the cages of web-wielding cohorts, who bombarded the product’s Amazon page with tongue-in-cheek reviews.

Want to boost traffic to your site? Get our free guide!

At 85 inches with “4K Ultra HD” Samsung’s UN85S9 HDTV is a super-deluxe television with a price tag to match – it’s listed at just shy of 40k. Is it any wonder this excessive piece of technological travesty became an easy target for internet lampoonery?

There are a number of funny reviews for this product, most mocking the television’s exorbitant pricing. One reviewer says:

However, by far the best – and one of the funniest Amazon reviews ever (IMHO anyway) – comes from James O. Thach, an Amazon Top 500 Reviewer, who tells a sad and sorry tale of sacrifices made in order to obtain this Samsung TV.

The review goes on a bit more with a follow-up after Amanda’s return. It’s a true piece of comedic excellent and worth reading in its entirety on Amazon.

Oh Hutzler 571 Banana Slicer, was there ever so useless a kitchen accessory? Probably not, but your absurdity has earned you an ironic 3.5 star rating and some funny fake Amazon reviews.

6. How to Avoid Huge Ships

Who doesn’t want to learn how to avoid huge ships? Without valuable information provided in Captain John W. Trimmer How to Avoid Huge Ships (Second Edition), you might find yourself walking down the street one day and BAM! Hit by a ship. It happens people –  this is the new reality. Don’t stay ignorant and unprotected – defend your family against large ships!

Some applaud the book’s sage advice on avoiding large ships and its assistance in broaching the subject of responsible ship use with younger generations.

Others wish they hadn’t read it.

Haribo gummy bears are beloved by many, cited often as THE most delicious gummy animal product on the market. However, things change a little when you go for the sugar-free alternative advertised here. One man shares the story of his gastro-intestinal intensity.

I don’t think it’s an exaggeration to say that this horse head mask is the most valuable contribution man has made to society since toast (think about it – it use to just be “warm bread” until someone got smart one day). This simple head garb transforms the mundane into Salvador-Dali-eque surrealism.

The best part of these funny Amazon reviews has to be the customer product photos, which are so hilarious that they belong in a best-selling coffee table book somewhere.

Introducing an HDMI cord so classy, you can propose to your girlfriend with it! The diamond braided HDMI cable is a whole new way to put yourself into crippling debt while enjoying the best that high definition has to offer. Never mind that it’s 5X as much as the television – the improved picture quality is like totally worth it.

Us poor, suffering Breaking Bad fans are still bemoaning the loss of our beloved show (Magnets! Science, yo!) Thankfully, Amazon reviews live on, providing us with the chance to encounter Heisenberg and his devoted junkies once more.

Do you have any favorite funny Amazon reviews you want to share? Post links in the comments!