How Much Are Mobile Brand Searches Really Worth? (Data) 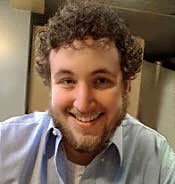 When I initially started working in SEO, I was working for then-unknown start-ups (including this one), and branded searches seemed to me to be the most boring part of SEO and PPC. Those searches are already there (they get created by other channels), you’re almost certainly going to rank for them in organic search, and you likely have to “defend” them in PPC. So who really cares about branded searches?

But as I did more work in SEO and PPC with companies of varying shapes and sizes, I quickly learned that for many sites branded searches make up a majority of their organic and paid traffic. Beyond that, for very large brands that traffic can be worth millions and millions of dollars.

I also learned that there are different variations of “branded searches” (e.g. “{brand name} reviews,” “{brand name} coupons,” etc.) that are valuable and can be trickier than one might expect for a brand itself to rank for and defend.

The one thing that’s particularly jumped out at me recently, though, is what an amazing growth opportunity branded searches are for Google as a company.

Many people (though not most, it turns out) know that a vast majority of Google’s (and Alphabet’s) revenues come from AdWords, and specifically paid search. And the assumption is of course that that spend is because of the efficacy of search advertising. Lots of insurance companies want to be in front of people who are actively searching for things like “best life insurance plans.”

I own a search marketing consulting company, and I also own multiple web properties whose traffic is driven primarily by search, so I certainly believe in the power and value of unbranded search traffic. I also think that not everyone realizes just how much of Google’s revenue is driven by branded search.

And I further think that not everyone realizes that a general move to mobile searches represents a large opportunity (in the very least in the short term) for Google to grow revenues aggressively on branded searches.

The Relationship Between Mobile and Brand Searches

The number of people searching on mobile devices varies by industry and topic, but according to Google statements and Hitwise data mobile is now responsible for more than half of all Google searches (and likely more like 60%+). It’s not controversial to assume that that number will continue to grow.

Given all of this, I wanted to look into two things:

So in this post I’ll walk through some estimates on the actual value of branded searches, as well as take you screenshot-by-screenshot through what appears to be in the billions of dollars worth of branded searches on desktop versus mobile to show you why I suspect much of the search traffic on those specific terms will be shifting from organic to paid (thus generating lots of advertising revenue for Google).

How Much Are Branded Searches Actually Worth?

To start with, I looked at the branded traffic and clicks available for each of the top five advertisers in Google’s most profitable industries, according to a WordStream study from a few years ago. This obviously doesn’t give us a comprehensive picture of every brand search on Google, and there are likely some other brands who have more search volume and potentially higher costs, but I thought it was a good starting place to begin to get a sense of the opportunity here.

Here is the projected estimated data for branded searches for these 50 companies:

A few notes on the data here:

All of that said, I found the numbers interesting. Over $171 million per month for just 50 brands – that’s over $2 billion annually. For a company that makes 90 billion that’s just a few percentage points of total annual revenue, but think of the aggregate market for brand searches across every consumer brand, Fortune 500 company, local business, etc. Seems like a potentially significant piece of a pretty large pie.

So we understand that these branded searches are potentially big business for Google. Now let’s take a look at how searchers are experiencing them (and what it may mean for these brands).

What Do Branded Searches Look Like on Mobile Versus Desktop?

Now let’s look specifically at the SERP layout for the branded search result for the company in each of Google’s top spending industries (again according to the above-linked WordStream study) that was spending the most on paid search (with a few exceptions where the branded search had a URL as the brand name – e.g. Booking.com – in which case I grabbed the second result).

Let’s go screenshot-by-screenshot through what I’m seeing on my personal laptop and my personal phone (so of note is that some of the search results will be based on my search history and obviously this isn’t a boil-the-earth, comprehensive review of every possible screen size or device, etc.).

First up is State Farm.

Their desktop branded search is really pretty good – they’re having to spend to have their ad (which takes up a good chunk of real estate) featured on the SERP, but they also have their site, a site search bar, and a description of their company (including their URL) featured prominently.

When I look at their mobile branded result, meanwhile, their ad is literally the only thing I can see on my screen. If I’m a typical user trying to get in touch with State Farm or navigate to their site, it seems pretty unlikely I’d make my way down to their website without making Google some money in most instances. 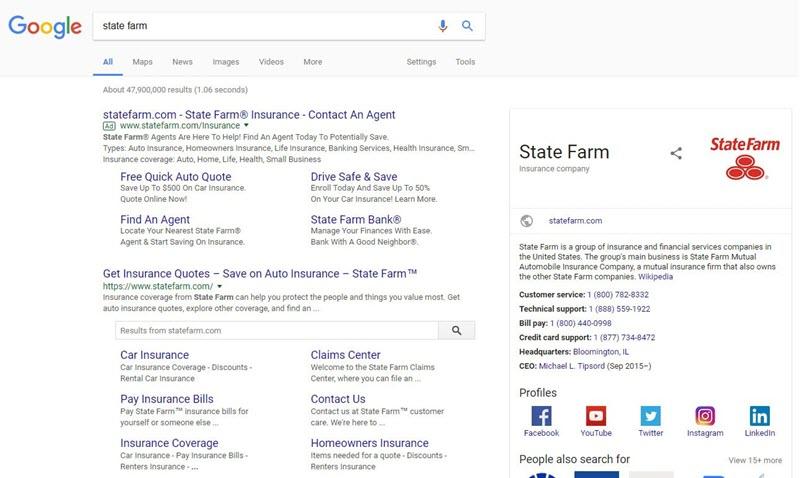 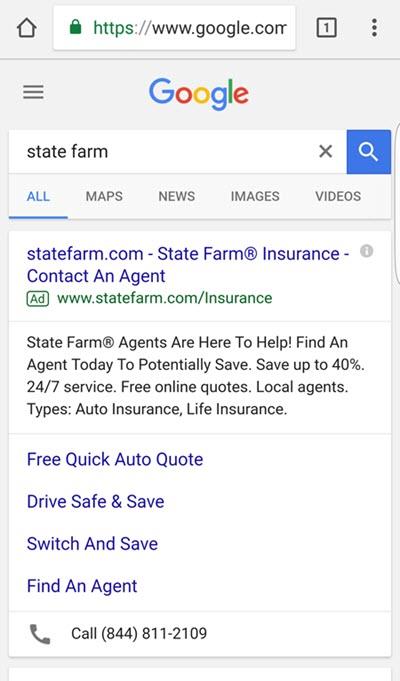 Amazon is probably getting the best deal of the lot in the move from desktop to mobile! Their desktop result is relatively good as well (again featuring company info and getting to their organic listing quickly), but their mobile result (for me anyway) is completely organic! As we run through the rest of the branded searches we’ll see that this is not the norm.

Expedia is effectively the inverse of Amazon here on my screens, moving from a very organic-friendly desktop layout (with a big organic result, company info, and stories about the company) to a single big branded ad. 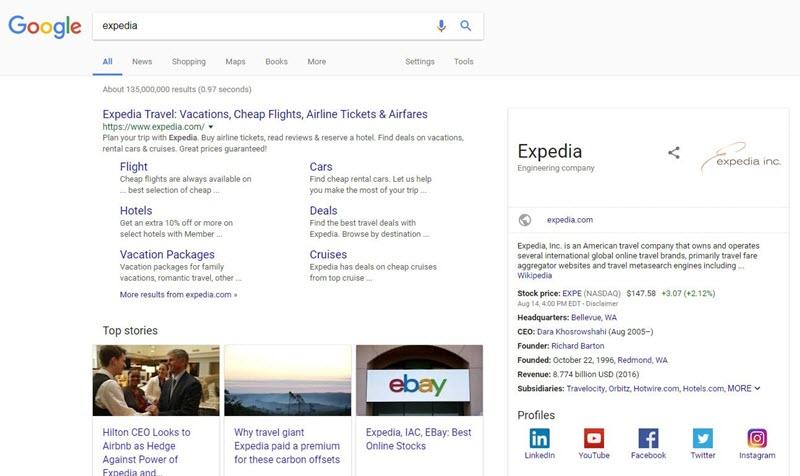 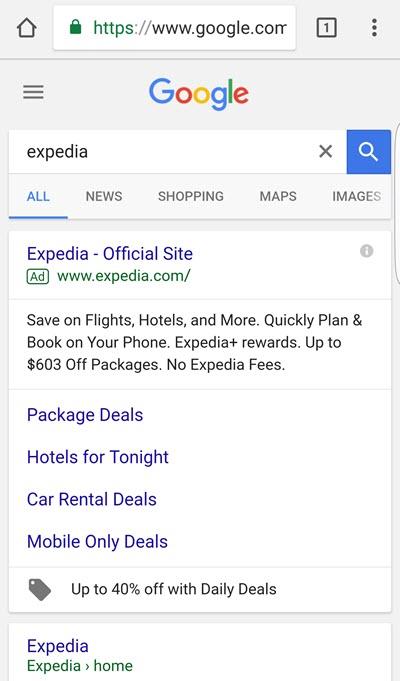 The University of Phoenix probably has the toughest before/after on the list, where they’re going from a big organic result, a company Twitter account, and a local campus listing to…a competitor’s ad!

Below the competitor’s ad is another listing from an affiliate site that compares different colleges. Not exactly where you want to be driving all of the people who have seen or heard all your TV and radio commercials. 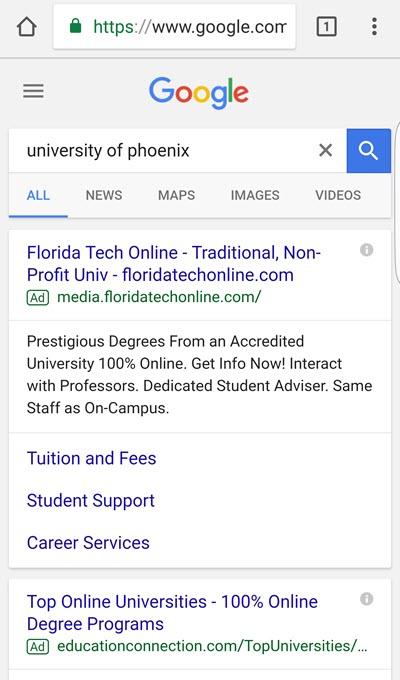 Lowe’s is getting one of the better deals of the ten sites I looked at with the move from desktop to mobile. While their desktop result is very good (lots of organic real estate, nice company info, and a list of stories about the company), the mobile result also only features a map and the local Lowe’s locations nearest to me. 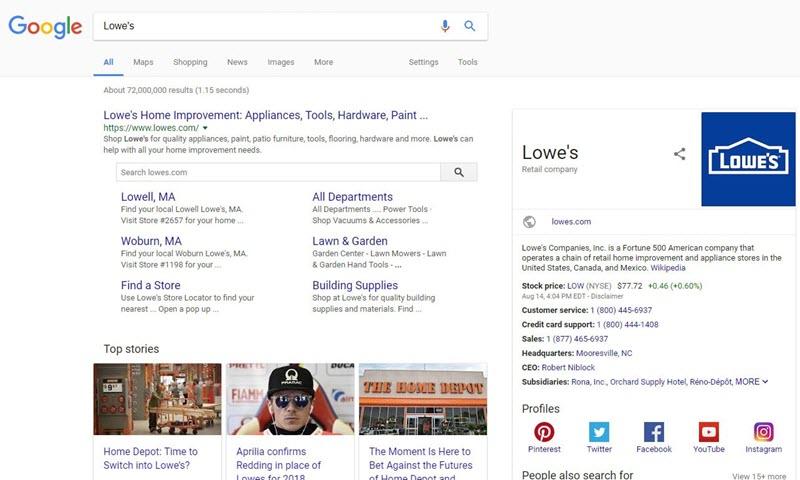 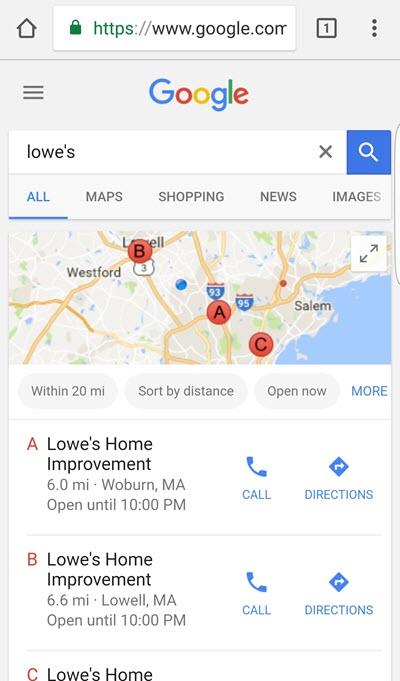 HP’s desktop result is fairly ad-heavy and features two reseller/competitors, but I can at least see the organic listing and some general company info here. In their mobile result I’m getting virtually all ad, with the tip of some news results: here again it seems likely that many mobile searches will navigate to the site through paid search clicks. 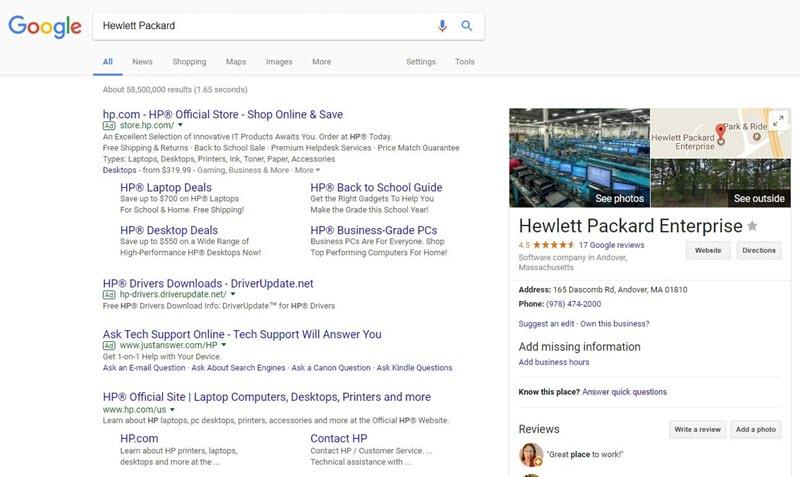 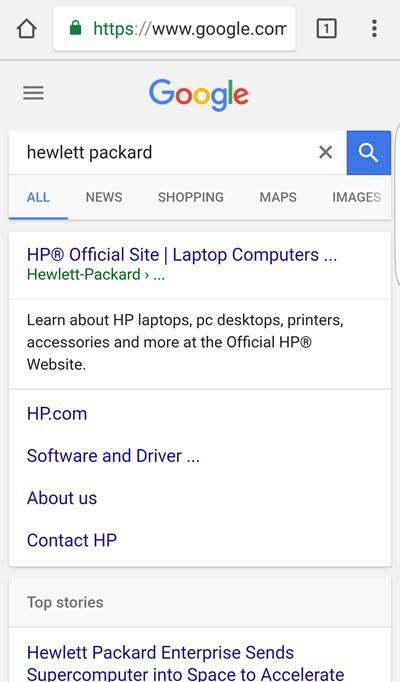 Autotrader’s desktop search allows me to quickly see the organic site (along with multiple site links) and information about the company in addition to the prominently displayed ad. The immediately visible portion of the mobile SERP? All ad. 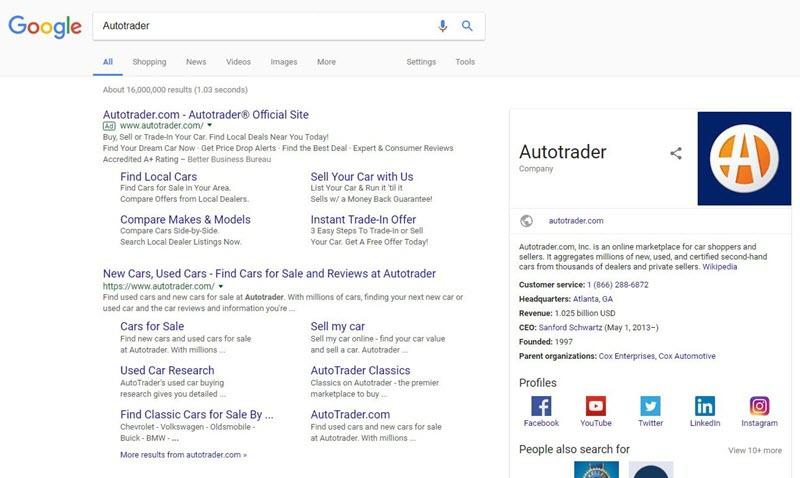 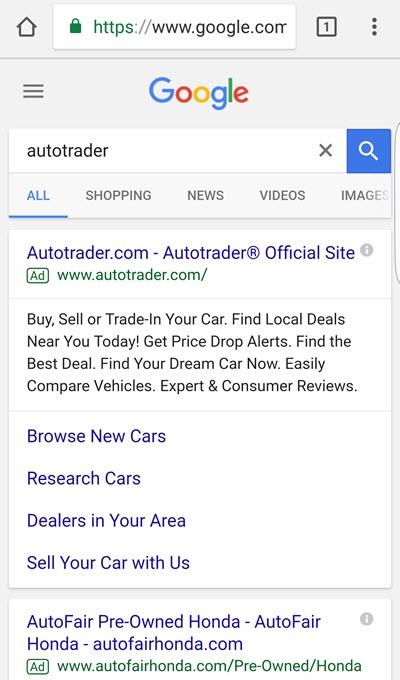 AT&T’s desktop search once again has a large ad from the brand, but allows me to quickly see the organic listing, a site search box, and sitelinks as well as general company info in the right nav. 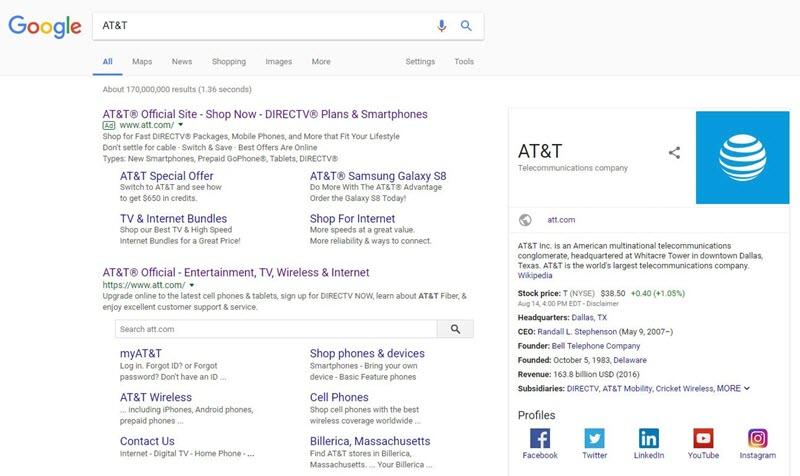 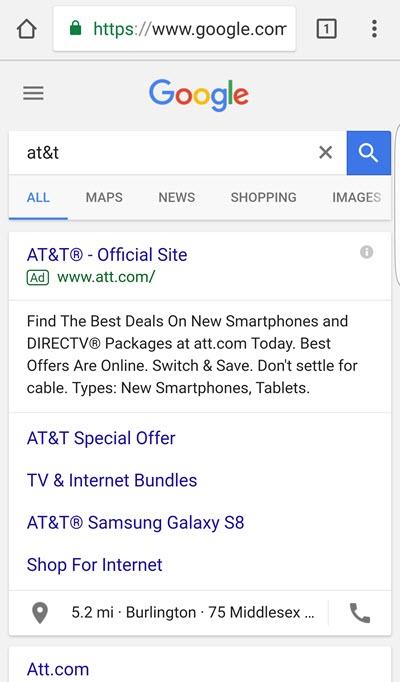 Uline continues this trend with a prominent organic listing below the paid listing, organic site links, a site search bar, and company info.

Juxtaposed against the visible part of the mobile SERP: only their ad. 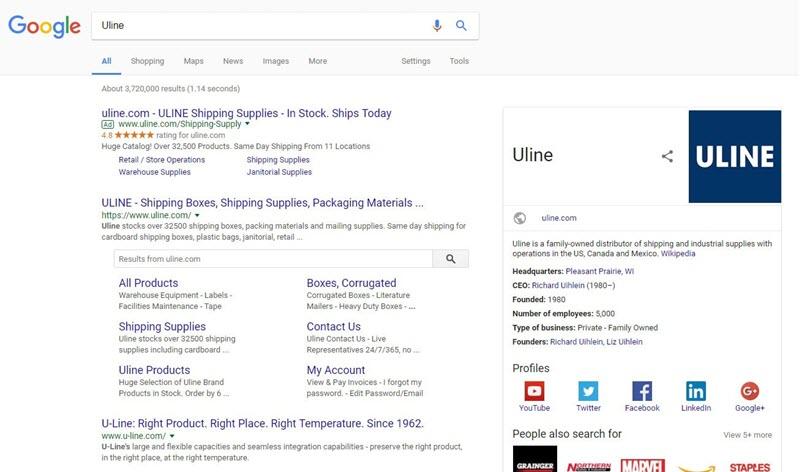 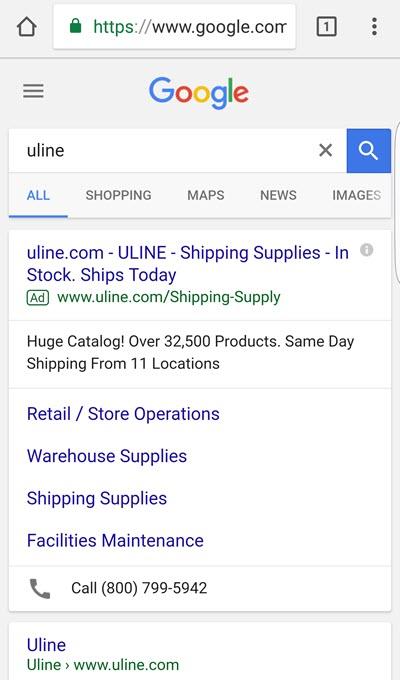 1 800 Flowers is another victim of the move to mobile on my devices: they go from an ad-heavy desktop SERP (complete with shopping results and a couple of competitor ads) that at least has a sliver of above-the-fold organic hope, to an above-the-fold experience where nothing but a competitor ad is featured. 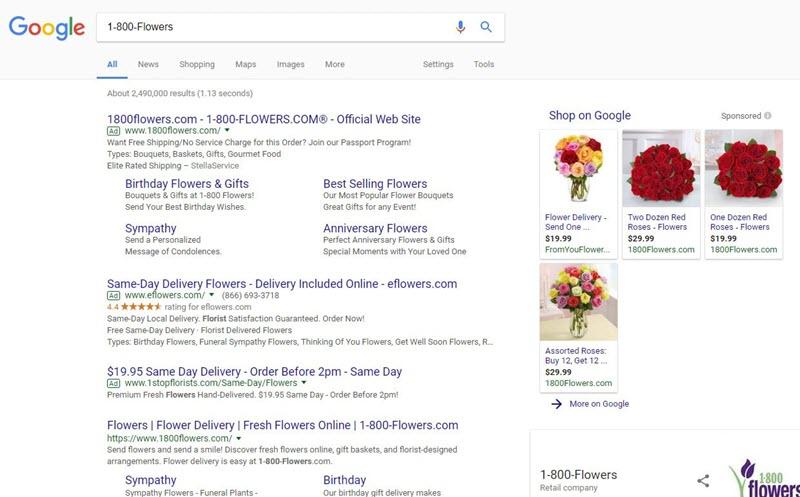 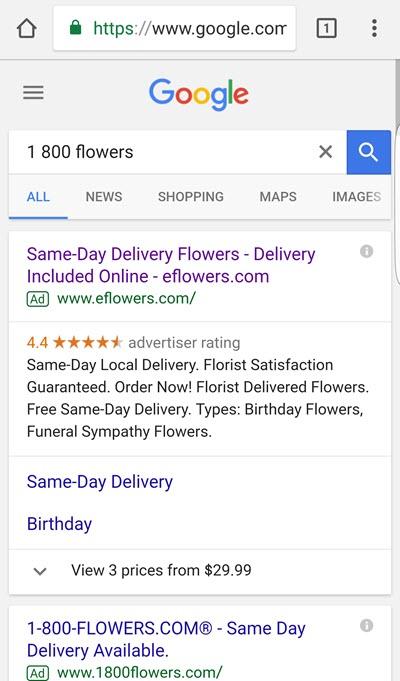 Now 10 sets of screenshots is obviously not a comprehensive look at all branded searches on desktop versus mobile, but given how much money these brand searches represent, it’s striking that:

That’s the same number of brands that effectively lost their branded search to competitors as those that saw a neutral to positive change in ad-real estate when looking at desktop versus mobile.

What Does All of This Mean for the Brands Themselves?

So it seems pretty clear that:

Beyond the idea that these brands are suffering from less advantageous search results as branded traffic moves from desktop to mobile, it also occurred to me that even if they can protect their branded queries and get mobile searchers to their sites, this could be a major issue for these brands beyond simply having to pay more for the same branded traffic.

Why? Well for many sites, the mobile versions of their websites aren’t as well built and well maintained as the desktop version, and in many instances mobile traffic doesn’t monetize as well as desktop traffic, even for high-intent terms like branded searches.

We obviously can’t peak behind the scenes at how effectively each of these companies are monetizing different types of traffic, but I thought it would be interesting to look at how Google’s own tools view the performance of these different brands on mobile and desktop. So I ran each of the sites through one of my favorite SEO tools, URL Profiler, and got the Google Page Speed Insights mobile and desktop page speed scores for each site.

These scores clearly aren’t definitive proof that these sites are or aren’t monetizing mobile traffic less efficiently than desktop traffic (and Google Speed Scores generally are an imperfect measurement), but Google has certainly dialed up the impact of page speed and usability.

All of that said: 40 of the 48 sites listed here (the other two had been acquired or moved to other URLs) have page speed scores that are lower on mobile than on desktop, and in some cases significantly so.

So what’s the takeaway from all of this?

Unfortunately I don’t think there’s much that most companies can do about Google’s more aggressive ad placement in mobile SERPs, but one area that companies in this predicament can focus is to seriously consider investing more in the performance and user experience of your site for mobile users.

Take a look at your analytics and see how traffic by device is trending over the last 12-24 months, look at your profit/revenue per user by device, look for low-hanging fruit for improving page speed, and then think about how much time, energy, and money you dedicate to development for desktop versus mobile. Based on this data it seems like there’s a strong chance you may want to reallocate some of those efforts.