6 Cognitive Biases You Can Exploit to Boost Sales

As human beings, we tend to think we are perfectly rational beings. We aren’t – at least that’s what decades of cognitive research has shown.

In a 1968 study, Oregon State University Professor Charles Goetzinger ran an experiment in his classroom. Without informing the rest of his class, he had one student come to each meeting in a black bag with only his feet visible. Goetzinger then observed the reaction of other students. Initially, his students treated the “black bag” with hostility. Over time, however, as they kept seeing the black bag in class every day, their hostility turned into curiosity. Eventually, classmates developed friendships with the student in the black bag.

Goetzinger’s experiment only proved the efficacy of a theory that has been posited long before: familiarity breeds content. You can use that.

How to Use the Mere Exposure Effect to Boost Your Sales

1. Leverage retargeting to boost sales. When trying to advertise your products or services, retargeting people who have visited your website before will yield significantly better results than targeting raw prospects. In fact, a particular study found that the CTR of a retargeted ad is 10 times higher than that of a display ad and that website visitors who are retargeted with display ads are 70% more likely to convert.

2. Repurpose and distribute existing content. You can also boost sales by significantly expanding the reach of your content by repurposing and distributing it. A simple blog post can be turned into an infographic, video, podcast, slide presentation, and so much more. When distributed across other channels, some people are likely to see it more than once – and that’s good for your sales!

In a 1979 study, psychologists Daniel Kahneman and Amos Tversky found that people tended to prefer not to lose something they already have than to acquire something of equivalent value. In other words, most people will find it more painful to lose $10 than to miss out on an opportunity to gain $10. This phenomenon is known as loss aversion, and a growing body of research is showing that it is primitively hardwired into us to be loss averse: a 2005 study involving capuchin monkeys came to similar conclusions, that monkeys prefer to take a gamble on a potential gain than on a potential loss – even if both are, economically speaking, of equal value.

You can incorporate this cognitive bias into your strategy by remembering that your prospects will go out of their way to avoid risking a loss.

How to Use Loss Aversion to Boost Your Sales

1. Offer free trials and samples of your product. When people have the opportunity to try your product or service and really engage with it, they are more likely to form an attachment to it than if they never owned it to begin with. And when they’re able to take advantage of this opportunity to engage with your product or service without risking any monetary loss, they’re much more likely to sign up and try it out. Consider offering free samples, demos, or even a free trial period, like Amazon Prime offers below.

2. Offer a limited-time bonus. If you advertise and offering that is only available for a limited time, you create a sense of scarcity that encourages consumers to hurry up and commit to a purchase. If they choose to buy now, then they get the bonus; if they don’t buy now, then they lose out on this bonus offer.

3. Use a countdown timer. Show your prospects just how urgent the offer is by using a countdown timer. They can watch the hours and minutes trickle down to your offer closing – not only does this leverage the scarcity principle, but it ensures that your potential customers can actually feel the urgency.

In a 1992 experiment, researchers gave participants the opportunity to choose between 35mm Minolta cameras. In the first test, participants were presented with the following options:

Participants were split 50-50 between both cameras.

The experiment was then modified to see if a “compromise” option would affect the results. This time around, participants were presented with the following options:

As shown by the results of this study, simply adding a “compromise” option, a sort of middle ground, can significantly tip the choice people will go with.

How to Use the Compromise Effect to Boost Sales

1. Accompany the option you really want people to choose with extreme options on both ends. The compromise effect is most effective when the options available on the lower and higher end are extreme. If it’s difficult to clarify between all the options, or if they are too similar, they might end up confusing users.

2. Put the “compromise option” in the middle. When designing your pricing plan, place the compromise option (or your main option) in the middle to give it a kind of special attention, making people focus on it more than the other extreme options. As a result, more people will likely to take advantage of this featured option.

Below is an example from Aha!’s pricing page – the “Enterprise” plan in the middle is a perfect example of compromise pricing in action: 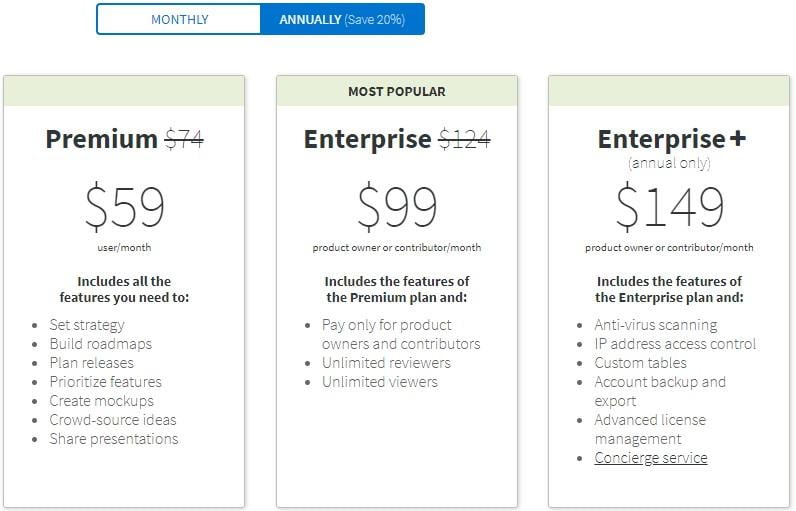 In a 1984 experiment, psychologists Daniel Kahneman and Amos Tversky asked participants a question about an impending outbreak of an unnamed disease in the U.S.

Here’s the exact question they posed:

Imagine that the U.S. is preparing for the outbreak of an unusual Asian disease, which is expected to kill 600 people. Two alternative programs to combat the disease have been proposed. Assume that the exact scientific estimates of the consequences of the programs are as follows:

Which of the two programs would you favor?

The same question was presented to other participants with different options:

Even though the options were practically the same (as with Program A, 200 people will be saved in Program C) and just framed differently, the results were different. With these options, only 28% chose Program C while 72% chose Program D. This shows that how something is framed can significantly impact the response.

This has great implications for boosting sales and conversions: how you frame your offer will determine how people respond to it.

How to Use the Framing Effect to Boost Your Sales

1. Frame your offer in such a way that it is clear that not taking up the offer is a losing proposition. For perspective, in a 2009 study in the Journal of Economic Behavior & Organization, researchers found that when Ph.D. students were told to register for an economics conference, more students registered when the early registration “discount” was framed as a penalty fee for late registration instead of as a discount. In other words, we are more worried about losing what we already have than about gaining something new.

Instead of simply saying that “website builders cost $XX a month,” I framed this option as costing a significant fraction (“a few dollars each month”) by comparison.

In a 2011 study, researchers observed consumers as they assembled IKEA boxes, folded origami, and built Lego pieces. They found that participants saw their “amateurish creations” as similar in value to the creations of experts. More interestingly, the participants expected others to share this view of their work.

Based on these results, the researchers concluded that people tend to value a product more if they were involved in its creation – even if they were originally uninterested in being involved. They termed this the “IKEA effect.”

The IKEA effect has a clear application in your marketing strategy: when you involve users in the process of creating your products or services, they are more likely to convert when you sell it to them.

How to Use the IKEA Effect to Boost Your Sales

1. Involve consumers in the process of building your products. Consumer can be involved by committing time to product development, by giving input in the process of its creation or improvement, or by investing money. An example of this in action is crowdfunding campaigns: when people contribute financially to the development of a product even before it is made, they are more likely to do everything to ensure it succeeds. While Oculus Rift was a massively successful crowdfunded project, researchers have attributed its success not to the funds raised but to the community and sense of ownership the crowdfunding fostered.

2. Give users the option of having your products customized for them. Whether it’s the packaging or certain parts of the product itself, offering a customizable option involves your customers and potential customers more personally. A notable example of this is Coca-Cola’s Share a Coke campaign. When Coca-Cola launched this initiative and allowed users to have their own customized version of the Coke, sales exploded. And the results were almost instant. Just within the first year, Coca-Cola saw significant, measurable success:

In a 1975 study published in the Journal of Political Economy, University of Chicago Professor Sam Peltzman found that when laws – such as mandatory use of seatbelts and other safety devices – were introduced to regulate driving and ensure safety, drivers were emboldened to drive riskier when using those devices than in their absence, thereby offsetting some of the gains recorded due to the introduction of such laws.

This phenomenon is known as the Peltzman effect, or risk compensation theory, and it has great implications for your sales conversion. The less “risky” you make doing business with you, the higher your conversions.

How to Use the Peltzman Effect to Boost Your Sales

1. People will judge a book by its cover – and your business by your website. In a study of 2,000 consumers, Econsultancy found that 32.2% of people pay attention to how professional and well-designed a website is before deciding to trust it. Trustmarks and site speed can help with this. The same study found that 48% of people feel safer shopping on a website if the site uses a trustmark, and 23.65% of people find it difficult to trust a site that takes too long to load. If you lower the perceived risk of your website, then you can encourage more of your visitors to convert.

2. Make it easy for prospects to contact you. The easier it is to contact you, the more trustworthy you appear. Econsultancy also found that for 46.35% of people, not displaying contact details is a sign that a site is not trustworthy. So make sure that you have contact information in a few central, easily accessibly locations to put your prospects at ease.

3. Outline a clear “no-risk-on-you” refund/return policy. Another way to make it easy for people to trust you is by offsetting the risk on them if they do choose to make a purchase. If you offer an unconditional refund/return policy, you lower the risk of doing business with you – and encourage conversions in the process.

For the Best Results, Use Cognitive Biases Sparingly

Each of these cognitive biases can be applied to your marketing strategy to help boost sales. But you make sure you don’t over use these biases. Consider your target audience and your marketing goals to determine which tactics would work best for you. Then try them out one at a time to see which yields the best results.

Robert Mening is a web designer and conversion optimization expert who runs WebsiteSetup.org, a project that has helped over 250,000 start their own websites.