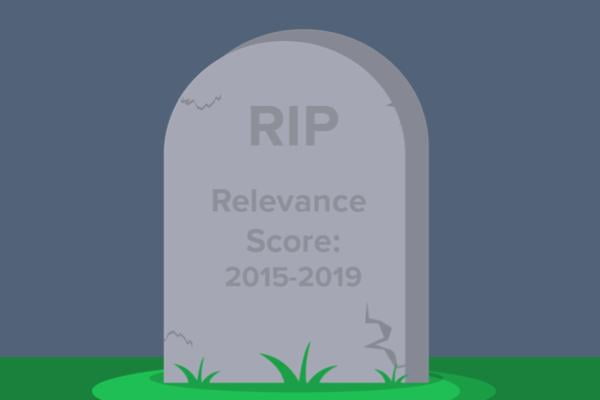 Yesterday, Facebook announced that it’s sunsetting Relevance Score—the ad-level metric that basically tells you whether your ad is any good—and replacing it with three new metrics:

Let’s dive deeper. After looking more closely at Relevance Score and the metrics that will replace it, we’ll talk about why Facebook is doing this, why it’s good news, and how to go forward.

What is Relevance Score, and what’s replacing it?

Something I tend to think of as a more confusing version of Google’s Quality Score, Relevance Score tells you how relevant and engaging your ad is. It’s Facebook’s way of telling you whether you’re doing a good job or not.

Relevance Score is measured at the ad level and it determines both how much you pay for a click and how often your ad is served to Facebook users. If your ad isn’t terribly relevant to the audience you’re targeting, Facebook charges you a premium for serving it to them—and serves it somewhat infrequently, too. Alternatively, if your ad is highly relevant to the audience you’re targeting, Facebook rewards you by charging you less and serving your ad more.

“This is all pretty straightforward, Conor. Are you sure you’re not just dumb?”

Hold your horses. When it comes to the components of Relevance Score, things get a little less intuitive. Facebook will assign your ad a Relevance Score after it’s been served a couple hundred times—thus giving Facebook enough data to make educated performance predictions.

Every time your ad runs, Facebook looks at your campaign goal and your target audience to determine how likely people are to do whatever it is you want them to do. In other words, your ad’s Relevance Score is based on expected performance. Sort of vague, no?

We’ll talk about that more in a minute. In the meantime, here’s a closer look at the new metrics that will replace Relevance Score:

You’ll see these metrics in your Facebook Ads account at some point in the coming weeks. Relevance Score will stick around until April 30.

Why is Relevance Score going away?

Because it doesn’t help you very much.

To elaborate: Facebook is replacing Relevance Score with the new metrics to give you a more focused, granular perspective of campaign performance. Like I said earlier—the math behind Relevance Score isn’t all that intuitive. If you see that your ad has a Relevance Score of 5, but you’re not entirely sure what that even means, what good is that to you? How does that inform your strategy going forward?

To answer my own questions:

I spoke to our lead generation specialist, Kristina, to get her take on the news. “I’m really excited about this,” she told me. “These new metrics give you way more information than Relevance Score does.” She went on to refer to Relevance Score as “a black box” for Facebook advertisers—something you can’t fully understand or definitively improve.

Let’s fast forward a bit. It’s July. You’ve sent your kids to sleepaway camp because you’re in desperate need of some spa—ahem—because you want them to enrich their young lives with new experiences and challenges. Relevance Score has disappeared from your Facebook Ads account and you’re getting the hang of the new metrics.

Let’s talk about how you can improve them.

If you notice your quality ranking is lacking, that means your competitors are creating better ads. Think about the users you’re targeting and ask yourself if your ad could be more relevant to them. Does your copy clearly and succinctly address their problem? Does it offer a solution and call them to action?

If it’s your engagement rate ranking that you’re worried about, you’ll need to focus on the things that make Facebook users stop scrolling and take action. Could you replace your static image with a GIF or a short video? Could you create a more appropriate CTA button?

And finally, if you’re looking to improve your conversion rate ranking, you’ll need to evaluate the post-click experience. If you’re using the lead ad format, does your form include too many fields? If you’re using a separate landing page, does it clearly elaborate on the problem and solution you addressed in the copy?

We’re excited about the replacement of Relevance Score, and you should be too. Empowered by a whole new level of granularity, you’ll be creating your best Facebook Ads ever in no time.

See other posts by Conor Bond