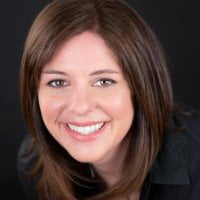 While Ernest Hemingway may not have actually won a bet with the famous six-word story, “For sale: Baby shoes. Never worn,” it is an example of great copy.

According to James Watkins, digital marketing manager at hygiene services provider PHS Group, that’s because it “bleeds emotion [and] tells the full story with all the context you need in one sentence.”

See how much you can do with just a single sentence?

Like this six-word story, good copywriting tends to be concise. But great copywriting is also memorable, often because it plays on current events, gets controversial, or attempts something that has never been done before. It’s copy that demonstrates the copywriter knows their target audience. And it’s effective because it moves metrics like sales or impressions.

Looking for some inspiration to create your own crazy-impressive copy? Here are 21 of the best copywriting examples from emails, packaging, billboards, PPC, and more.

We’re starting off this list with timeless copywriting examples—brand copy that remains relevant and, let’s face it, impressive years after the campaigns may have ended.

In 1911, Morton Salt began adding an anti-caking agent to prevent clumping, making it what the brand calls the “first free-flowing salt.” Three years later, the slogan, “When It Rains It Pours,” was born alongside the Morton Salt Girl. On its website, Morton notes that “many branding enthusiasts and authorities” call this duo “one of the greatest branding triumphs of all time.”

For his part, Alex Vale of SaaS startup Attio called the concise, enduring reference to the salt itself—which also happens to be a play on a proverb—”phenomenal.” 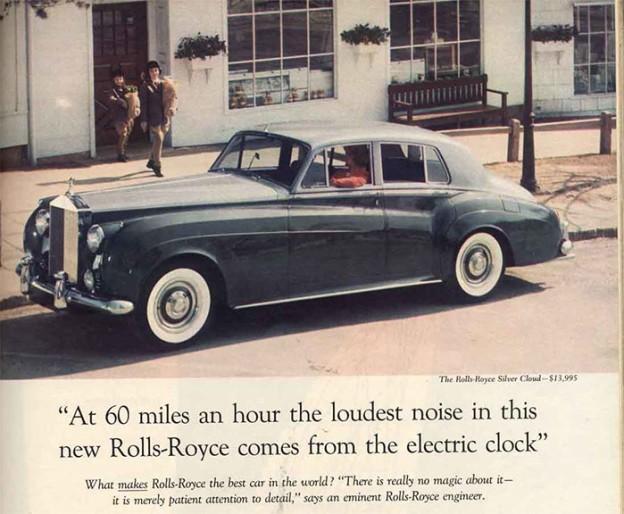 With presumably no pun intended, Joe Swinn, digital marketing lead at managed services provider Yell IT, called it a “timeless classic” as it “[set] Rolls-Royce apart from every other car.”

“Beyond the excellent headline, the body copy is long, but packed with detail and emotion, giving not just the specs of the car, but the process that makes it and a sense of prestige and tradition,” Swinn added. “It really speaks for itself—and positioned Rolls-Royce as the pinnacle of the automotive world.”

💰 Ready to hit the jackpot of ad copywriting tips? Download the free guide:

>> 10 Tricks to Get the Click: How to Write Exceptional PPC Ad Copy

Swinn also pointed to car rental company Avis’ “We Try Harder” messaging in print, which came from a copywriter at ad agency DDB in 1962 to address the challenge of how a brand positions itself as the best when it is not the market leader.

“The words are effective—and it does a great job at positioning Avis as having better service, quality and attention to detail,” he said.

The tagline “Pass the Heinz” was the work of fictional ad man Don Draper on AMC’s Mad Men. While it was rejected on the show, agency David Miami convinced Heinz to run with the copy—along with images of ketchup-less fries, burgers and steak, of course—in 2017.

In a video about the campaign, David Miami called this the “first-ever reverse product placement” and said the print and out-of-home effort resulted in 2.6 billion media impressions and $55 million in earned media.

Copywriting that stands the test of time is great—but references to current events can also be incredibly effective. Here are just a few successful examples.

Athletic and footwear brand Nike celebrated the thirtieth anniversary of one succinct-but-great tagline—Just Do It—with another: This time, the brand took a stance on an ongoing issue with an ad featuring a closeup of former NFL quarterback Colin Kaepernick and the copy, “Believe in something. Even if it means sacrificing everything.”

It was a divisive ad, but struck the right chords with the right consumers—according to analysts, the company gained $6 billion in market value as a result.

When Brangelina split in 2016, low-cost airline Norwegian Air wasted no time advertising low fares to Los Angeles with the copy, “Brad is single.”

Swinn called this “A perfect example of timely copywriting in reaction to a significant news story,” adding, “Because it was huge news at the time, little context was needed.”

RELATED: 22 Brilliant Ways to Use Psychology in Copywriting (with Examples!)

KFC UK turned proverbial lemons into lemonade in its mea culpa for the brand’s 2018 chicken shortage, which was just three letters: FCK.

While acknowledging it was something of a gamble, Polly Kay, senior digital marketing manager at window treatment retailer English Blinds, said it was effective because in part the brand took responsibility, apologized and laughed at itself.

“KFC’s copywriters absolutely hit the ball out of the park and salvaged the brand’s reputation in one go with a witty, edgy, and very audience-appropriate response that generated a huge amount of goodwill and positive publicity,” she added.

Just days after England’s World Cup loss to Germany in 2010—in part because of a controversial call—optical retailer Specsavers took out print ads in UK newspapers to advertise its glasses with the copy, “Goal line technology … from £25.”

“The controversial game was the talk of the country, with goal-line technology [cameras to detect balls going into the goal] becoming the central focus of the dialogue,” Swinn said. “Many in England were incensed by the referee’s decision, so Specsavers put out this brilliant ad—tying themselves into it perfectly.”

Makeup brand L’Oreal Paris worked with ad agency McCann on a print campaign focused on workplace gender equality. The result: Copy that reads, “This is an ad for men. Hire more women in leadership roles. We’re all worth it.”

“It is bold and packs a punch,” Panchal said. “It keeps the content to the point, helping readers understand facts without any arguments.”

By the end of this year, the number of emails sent each day will exceed 293 billion. That’s a lot of competition, which makes impeccable email copy even more important.

Jakub Kliszczak, marketing specialist at call center platform CrazyCall, called it “one of the most creative pieces I have ever received” because in part it “talks about Brexit’s impact on the company and therefore its customers.”

But, he said, it’s also packed with Brexit references, so it’s “extremely fun to read.”

With billboards, digital screens, posters, and more, there are tons of opportunities to employ great copywriting techniques in out-of-home advertising.

In another example of less is more in copywriting, dating site OkCupid turned the acronym DTF on its head in an outdoor campaign from W+K New York.

“We’re on a mission to flip the script on DTF,” OkCupid said in a blog post. “After all, shouldn’t the person it’s describing be the one to decide what it means? The F should be your F to choose, to be whatever the F you want it to be.”

OKCupid’s campaign redefined the term in a variety of ways, like “Down to Fall Head Over Heels” or “Down to Fight About the President.” The result? Social mentions reportedly increased 50%.

When 20-something-year-old Swedish oat milk company Oatly began its push into the U.S. market, it brought a lot of personality to its outdoor campaign.

“My favorite example is when a writer employs self-referential humor,” said Patrick Ward, editor in chief at broadband connectivity search engine High Speed Experts. “Ads by their very nature are trying to sell us something so when a company can drop the pretense and be honest through humor, it definitely cuts through the clutter.”

RELATED: How to Write in Conversational Tone (+30 Awesome Examples)

In 2015, luxury automaker Lexus used cameras and image recognition to cater billboard copy to drivers in crossover vehicles from competitors, like Audi, Range Rover, and Mercedes.

After the billboard identified an approaching car that fit the bill, it catered copy to the driver, like, “Hey, white Evoque, it’s never too late to cross over.”

“What I like about this marketing idea is that it is customized for every audience,” said Jaykishan Panchal, content marketing manager at digital agency E2M Solutions.

Similarly, British Airways used “a little digital magic” on a London billboard in its Look Up campaign to identify planes overhead—including flight number and origin—in real time to illustrate the breadth of its flight paths. And, of course, to encourage viewers to look up at them.

Like out-of-home advertising, digital marketing also presents tons of opportunities for copywriting wins—in addition to the ability to reach your audience directly. Take a look.

In 2010, copywriter Alec Brownstein wanted a new job—and somehow realized there were no sponsored links in Google searches for his favorite creative directors. He took the bull by the horns and set up a PPC campaign of his own so the copy, “Hey, [name]: Goooogling yourself is a lot of fun. Hiring me is fun, too.”

And, because no one else was bidding on their names, it cost him just $0.15 a click—for a total of $6 overall.

“This one is brilliant because it is 100% audience-focused,” Swinn said. “The wording isn’t fancy, but it shows the power of simplicity and user focus.”

Insurance company Geico subverted pre-roll ads on YouTube in its 2015 Unskippable campaign. In this series of video ads, voiceover kicks things off with, “You can’t skip this ad, because it’s already over.” From there, the actors freeze, the camera keeps rolling and chaos and hilarity ensue.

“The in-depth data that they present about the market is what draws you into clicking to know what new LinkedIn has come up with,” he said. “And I am never disappointed with the PPC ads as what they offer after clicking makes the offers click-worthy. Also, I had this realization that what makes your ad copy or copywriting effective … is what you offer on the other side of the ad.”

Concise copy is good—but that doesn’t mean it always has to be short. Longform copywriting can be just as effective when it’s done well. Here are a few successful examples.

Long form is tough to make work in ad copy, but shoe polish brand Kiwi and Ogilvy Chicago knocked it out of the park in this 2018 print campaign featuring the real shoes of famous historical figures—like Muhammad Ali’s boxing shoes, Ernest Hemingway’s loafers and Amelia Earhart’s dress shoes—and a detailed narrative about their first steps. 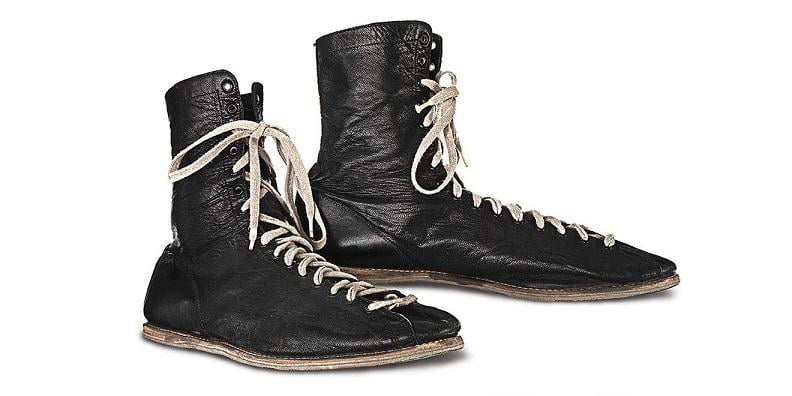 Per Ryan Jones, digital marketing executive at web design agency Imaginaire Digital, Barby’s blog post on acquisition strategies is “still, to this day, one of the best-written and most informative pieces of content I have read.”

And, despite its length, the layout “means it is still easy to follow and understand,” Jones added.

Free guide: The 36 Best Call to Action Phrases (Ever)

This news aggregation service offers a newsletter with “a strong voice that is both professional and relatable/fun to read,” said Ciara Hautau, digital marketing strategist at app development company Fueled. By making the copy accessible, they transform otherwise dry information to keep users engaged and entertained while learning.

Evan Alexander, copywriter at digital agency Union, pointed to the website copy for CBD-infused seltzer Recess, which effectively educates consumers about the brand and product in its own unique way.

“Because today’s consumer is inundated with messaging telling them what a service is or what a product does, it’s so refreshing to see Recess tell people what its product isn’t: ‘not wired, not tired,’” he added.

For more tips, head to our post on How to Write Copy That Sells (102 Tips and Real Examples). You will not be disappointed!

Lisa Smith is a freelance writer who has covered the digital marketing industry for more than a decade.

See other posts by Lisa Smith