Google Glass is Google’s latest product that hails a new generation of tech gadgetry in the form of augmented reality eyeglasses.

Google Glass is a wearable computer featuring a head-mounted display in the form of eyeglasses. The Google glasses function as a hands-free smartphone, letting users access the mobile internet browser, camera, maps, calendar, and other apps by voice commands. 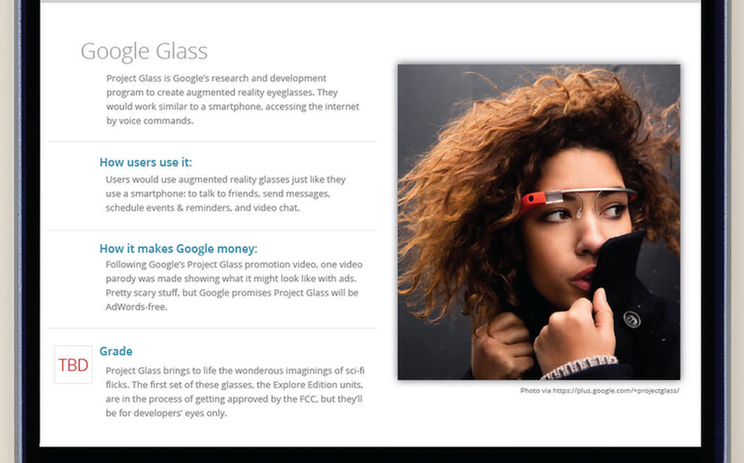 While the Google Glass demo video seems like something that could only be imagined in futuristic fantasy films, Google Glass will soon be a reality, with Explore Edition units of the augmented-reality eyewear set to ship out to a select audience in the near future.

Google Glass eyewear is being developed by Google X Lab, the same group working on other futuristic technologies like driverless cars.

Google Glass is not to be confused with Google Goggles, an image-recognition Google mobile product app that is available to Android users.

This first batch of Google Glass technology was available for pre-order at Google I/O, where attendees had the chance to pay $1,500 for early access to the headsets.

Google Glass also had an early adopter program called the Google Glass Explorer Program, a Twitter contest in which contestants were asked to tweet #ifihadglass with their creative ideas on how they would use Google Glass.

The contest ended in February, with a number of notable winners such as music artist Soulja Boy, web personality Dennis Crowley of Foursquare, and actor Neil Patrick Harris. Winners will be able to pre-order Google Glass for $1,500 (even celebs won’t be getting Glass for free).

Don’t worry though, you don’t need to have the luck of Charley Bucket to get your hands on a pair of Google Glasses.

The Google Glass release date to make the technology available to the public is set for the holiday season of 2013. The Google Glass price point for the consumer version is said to be under $1,500.

At South by Southwest (SXSW) Interactive 2013, Google demoed third party Google Glass apps, including a New York Times app for delivering the latest news, an Evernote and Skitch app for snapping, sending, and sharing photos, and a social networking Path app for interacting with friends.

What other apps will Google Glass have? We’ll have to wait to find out!