Google for Mobile: How Google Makes Money from Mobile 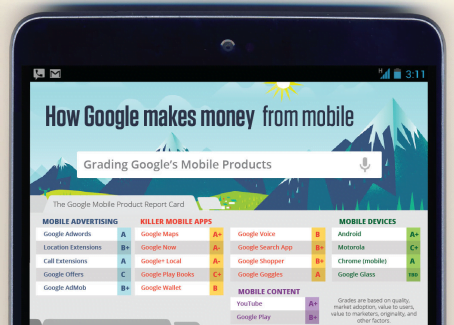 The mobile search market is experiencing out-of-control growth. Mobile searches have increased 200% year over year in 2012, and it’s predicted that within the next year, mobile will become the primary way people access Google’s services. But despite early reports, Google isn’t doomed from a sudden shift to mobile.

Far from it – the opposite in fact! Google has managed to transform itself into a “mobile first” company. Currently, the majority of Google’s $8B run-rate mobile revenue derives from advertising (excluding Motorola). That’s why the company is totally restructuring the way its pay-per-click advertising platform, AdWords, works – Google wants more businesses advertising on mobile, so it’s making mobile PPC radically simpler with the introduction of enhanced campaigns, as well as new mobile conversion types, offer extensions and a mobile app ad type, all specifically created to address mobile-centric use cases.

We believe that with such an exciting mobile product portfolio, advertising formats have just scratched the surface of the mobile monetization opportunity.

We’ve already showed you how Google makes money from search ads. In the below graphic, we outline Google’s top 20 mobile products, including a report card that grades each product based on quality, adoption, originality, value to advertisers and other criteria. Scroll through to learn what each of these products does – and how they add to Google’s bottom line!

Below is a quick summary of Google’s four areas of focus and the mobile products in each category.

Google mobile advertising in on the rise – Google’s key advertising products for mobile search include:

The Future of Mobile

This infographic doesn’t even cover all the mobile products that Google has in development – just the most exciting and (so far) most profitable of its forays into the mobile space. Clearly, Google is positioned to be one of just a few major players in mobile as the revolution continues. As far as mobile advertising goes, Google has barely scratched the surface of what’s possible. You can expect them to make huge advances in the realm of mobile advertising – and billions and billions in mobile ad revenues in the coming years.