Google today announced a bold and sweeping set of changes to their AdWords PPC management platform in a bid to greatly simplify mobile ad campaign management – at stake is the future of Google’s advertising business itself. All of the new AdWords Enhanced Campaign features – which I believe will greatly increase both mobile advertising adoption and Google’s revenues from mobile search – will become available to customers by the end of the month. In this article, I’ll walk through AdWords Enhanced Campaigns in detail. If you’re interested in the growing mobile search space (and you all should be!), pay close attention. These changes will affect all advertisers before the end of the year and fundamentally change the online ad landscape as we know it.

The Need for AdWords Enhanced Campaigns

We live in a multi-screen, constantly connected mobile world today, and marketers need to be able to easily reach people across all devices with relevant ads. Over the last 5 years, growth in search query volume from mobile phones has greatly outpaced growth in query volume from desktop computers – the number of daily searches on Google from mobile devices is expected to surpass daily desktop search volume by next year.

Yet there’s been a big challenge with mobile advertising adoption at Google – to take advantage of the sophisticated mobile advertising features and strategies that are required to be successful, like geo-targeting and device-specific targeting, advertisers must take on an exponential amount of additional campaign management complexity.

Meaning, in the current AdWords platform, advertisers are expected to create multiple different campaigns – one for every city and every possible device combination, which quickly becomes pretty difficult, if not impossible for the average advertiser to manage. Because this is so overwhelming, only the most sophisticated agencies and advertisers with large budgets and dedicated in-house PPC managers took advantage of Google’s various mobile advertising features. Here’s a screenshot to give you an idea of just how challenging mobile advertising was on Google AdWords before today (click to enlarge)

We estimate that within the small and medium-sized business segment, less than 1 in 25 bothered doing the work of mobile-enabling their PPC campaigns, because it was such a hassle.

Google realizes that they need to simplify mobile advertising, particularly given that mobile search accounts for roughly half of all searches. Accordingly they are now rolling out new “Enhanced Campaigns” with the goal of greatly simplifying PPC campaign management. Let’s take a look at how they work.

What’s changing is the way ad campaigns are structured. Google is rethinking how we deal with the multi-device world we live in, and is upgrading the decade-old PPC campaign structure to have the ability to leverage all of the important mobile advertising features, without having to create separate campaigns for every location and device combination – which was the previous best practice.

Going forward, ad campaigns will be different in several ways:

So overall, the idea of these new Enhanced Campaigns is to take the Google mobile advertising features that were previously available – but rarely used because they were too hard to implement – and now offer them in a much more scalable way for all Google advertisers.

So how do all these new bid adjustments work, exactly? For starters, all of the keywords and bids in your account still exist – no changes there.

Essentially the key difference is that rather than exploding the size of your PPC account by breaking out your PPC campaigns into hundreds of possible campaign variants, you only need to specify a single bid adjustment factor for location and device.

Specifically, for geo-specific and time-of-day based bidding, you’ll be able to specify a bid adjustment multiplier from -100% to +300%.

For mobile devices, you can now specify a bid adjustment between -100% and +300%. If you absolutely want to opt out of mobile (for example, suppose your company sells only desktop software that doesn’t work on mobile), then you can bid it down by -100%, which effectively turns off mobile search. 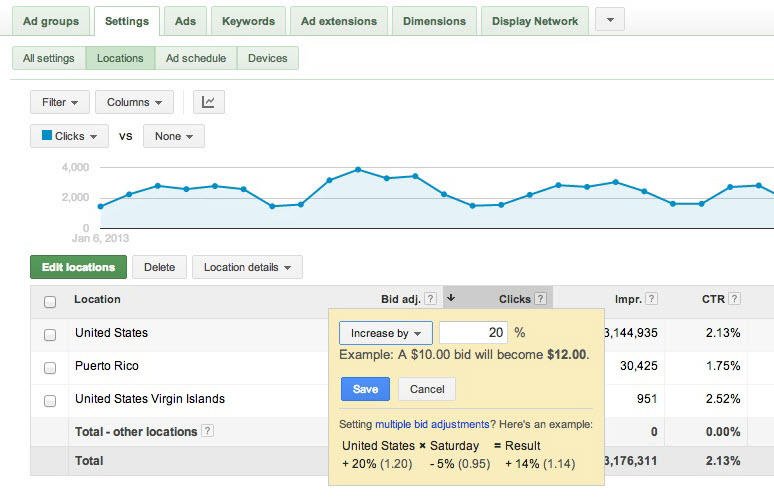 As a result of having the new campaign bidding options for location, time of day, and device – all device targeting is going away.

Another thing that’s changed with Enhanced Campaigns is that Google is no longer differentiating between tablets and desktop/notebook searches.  Google says that with the device ecosystem rapidly evolving, the boundary between tablet and notebook is becoming a bit blurred.  Take for example, a Windows Surface device that can operate as both a notebook and a tablet.

Google believes that the core use case of tablet computing replaces desktop and notebook computer usage in the home – and as a result, they view tablets as being pretty much aligned with desktop, in that they both have a pretty similar mix of search terms typically being executed, and similar ad performance of those searches.

The second big bucket of AdWords Enhanced Campaign features has to do with smarter ads where you’ll be able to customize your ads for mobile.

Essentially what is offered is a check-box that says: “I want this ad to run on mobile.” If you just have one ad in an ad group, and you check this box, then it’s going to run across all devices. But if you do have an ad group that has the new universal ads and mobile ads in the same ad group, Google will always display your mobile ad to run on the mobile devices. Essentially, mobile and desktop ads can now live together, in the same campaigns!

Additionally, ad extensions will all have new scheduling capabilities – like the ability to run certain ad extensions during happy hour, etc.

Previously Google had offered mobile call reporting features to allow an advertiser to see what phone numbers called, when, and how long the call lasted. This was helpful but a bit bizarre in that Google actually charged advertisers a dollar extra per call to use it – which, sadly, acted as a disincentive to adopt mobile search features!

With Enhanced Campaigns, Google is dumping the extra mobile call reporting fee because they would like all advertisers to take advantage of advanced call metrics and reporting as much as possible.

Therefore, AdWords Enhanced Campaigns is adding a mobile advertising conversion type. The conversion type is based on call duration and is specified by the advertiser. For example, an advertiser can specify a minimum duration of a call that you consider to be a conversion in your reporting.

This new conversion type should give advertisers greater insight into the true value of mobile advertising and will result in increased mobile ad adoption.

Like a lot of other Google AdWords changes, Google will give advertisers until mid-year to manually upgrade to the new Enhanced Campaigns, and then will automatically upgrade all accounts.

I personally don’t agree with the default settings for the auto-upgrade paths (2) and (3) above, because advertisers who had previously separated mobile/desktop campaigns (again, this was considered the best practice) will now end up having two campaigns targeting similar keywords with different ad experiences that target both mobile and desktop, even though they were likely intended to target either desktop or mobile search. It would have made more sense to me if the bid adjustment factor for mobile search was set to -100% for desktop only campaigns. I suspect the decision was made for business reasons (to grow Google Revenues).

One of the key things that you need to do when migrating to the new Enhanced Campaigns is to set your mobile bid adjustment factor to specify how much more or less you’d like to bid for mobile searches –the range is between -100% and 300%.

If you haven’t yet separated out your mobile and desktop campaigns in AdWords, you may have noticed that on average, the cost per click for mobile search is quite a bit lower than that of desktop search. What’s currently happening is that Google is doing some behind the scenes discounting to determine a mobile CPC bid for you, even though you haven’t explicitly specified a bid amount for mobile search.

Going forward, it’s the responsibility of the advertiser to set mobile bids. Google says that they’re going to try to initially set that as best they can (either up or down) for an advertiser based on auction metrics and looking at the keywords in your campaigns and what other advertisers are doing, but that their guess isn’t going to be as good as if someone makes a conscious decision for their business..

All of these changes are pretty huge and it will take Google a few months to roll everything out. Here’s a rough idea of what the schedule looks like:

It will be an option until mid-year. Then enhanced campaigns will be the default for all campaigns.

In addition to increasing adoption rates for mobile advertising in AdWords by greatly simplifying campaign creation, management and reporting for mobile search, Google wants to, eliminate the gap between mobile and desktop CPC’s.

So Are Mobile CPC’s Going Up?

Yes. I believe that on average, they’ll be the same as desktop CPC’s after the auto-upgrade rolls out due to increased advertiser competition and all of the auto-set mobile bid adjustment factors. In fact, last month Google CEO Larry Page was asked on an earnings call if he thought that mobile CPC’s would be going up any time soon, to which he responded:

“I am very, very optimistic about it. I think that [mobile] CPCs will improve … Obviously; I mentioned that we are working to simplify our ad system for advertisers. In the light of all these changes and I am excited about our plans there:  We don’t have anything to announce today but I am very excited about our efforts there. I think that we will make rapid progress in that area.”

WordStream was one of just 3 companies to be pre-briefed on the changes over a month ago because we work with nearly a thousand SMB advertisers. We’re excited to add these capabilities to our PPC management platform, and we already have teams working on it!  We’ll be publishing additional tips and best practices to our blog soon!

I think the changes make a lot of sense. Right now there are a bunch of advertisers that opt out of mobile search because they think (incorrectly) that the ROI of mobile search isn’t there. They’re led to believe that’s the case because they don’t fully take advantage of all the powerful mobile features that Google has to offer. And they don’t bother with those features because it’s pretty complicated and requires extra work on the part of the advertiser.

In particular, small businesses that I work with every day aren’t too keen on doubling the number of ad campaigns in their account because that doubles the campaign management complexity – and they have other things to do, like running their business! It’s also a bit more challenging to track the ROI of mobile search, and the call reporting costs are incurred by the advertiser. As a result, some advertisers make the determination that it’s not worth the hassle. As you can see, it’s a bit of a vicious cycle here.

I believe that the ROI of mobile search is very compelling – you have a lot of valuable leverage, like precise location, immediacy, commercial intent, and 1-click-to-call going for it. It’s always been a matter of just getting the advertiser to adopt the somewhat complicated best practices in terms of campaign setup and reporting to realize these benefits. By simplifying this process, I’m confident that you’ll see an uptake in mobile advertising adoption and ROI. I think the new AdWords enhanced campaigns will be particularly helpful for the SMBs who are not yet taking advantage of mobile search.

Let me know your thoughts in the comment fields below!