The WordStream Field Guide to the Google Search Page 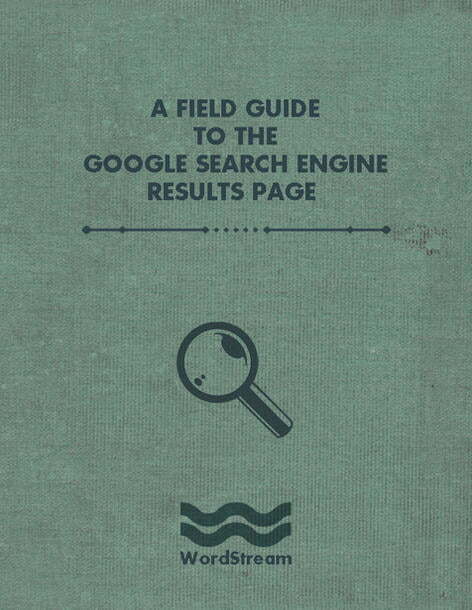 Despite being one of the most common sights in the rugged, untamed wilderness of the Internet, the Google Search Engine Results Page, or SERP, is a deceptively beautiful specimen. Indeed, it is difficult to imagine the World Wide Web without them.

While these magnificent pages share common characteristics, each Google search page is unique. In this field guide, we will cover how to identify and recognize each individual component of a SERP in the wild, what each of these features does, and how the SERP has evolved to become one of the most sophisticated pages in today’s Internet ecosystem.

Chapter 1: Evolution of the SERP

Google search pages were first observed in their natural online habitat toward the end of the 20th century – September 4, 1998, to be exact.

Google’s SERPs were rudimentary in their early days, yet remained a highly effective way for denizens of the Internet to find the information they wanted. In fact, it was this early dominance over other species of SERP that led to Google’s natural rise to the top of the Internet food chain.

Today, the Google SERP has allowed countless people to become the Internet’s apex predators. The Google search page is a responsive, intuitive, highly powerful tool that millions of people use throughout the course of their day to find the information they need amid the dense digital jungle of the World Wide Web.

When Google first launched in 1998, the SERPs only displayed organic links. Google’s indexing software algorithm, which would later come to be known as Googlebot, crawled pages on the World Wide Web, and compiled the results in an index. For the first two years of its existence, Google returned only “organic,” or non-paid, links in its search pages. Organic results will be discussed in greater depth in Chapter Two, whereas Google’s more recent informational tools will be examined in Chapter Four.

Even today, it is still possible to see Google SERPs that only feature organic results. This is because certain search terms are clearly informational in nature. For example, it is unlikely that a user searching for “Abraham Lincoln” is seeking to purchase goods or services relating to the 16th President of the United States. As a result, Google does not display advertisements to the user for many informational searches.

Although Google only displayed organic results during its early days, this would change just two years after Google launched when it introduced the AdWords advertising platform.

In need of a reliable source of revenue in order to survive, Google monetized its search engine in October 2000 with the launch of Google AdWords.

Initially, there were just 350 AdWords advertisers. Today, millions of businesses worldwide use AdWords to reach new customers. As Google’s advertiser base has grown, so too has the number of advertising formats and options available.

Survival of the Smartest

An overwhelming majority of Google’s annual revenue comes from advertising, which has allowed Google to diversify into other areas, including desktop and mobile operating systems, Internet infrastructure, and its driverless car initiative, which was pioneered by the engineers at Google’s experimental Google X laboratory.

However, at its core, Google has continued to invest in the research and development of increasingly sophisticated search technologies, all of which have continually refined and improved the user experience for Google users around the world.

In the Google search page, organic results are pages indexed by Google that have not paid for the privilege of potentially being displayed prominently to users conducting a relevant search.

In the figure above, the highlighted results are considered organic.

Organic search results are not static; they change over time. There are hundreds – if not thousands – of what are known as ranking signals that determine the order in which organic results are displayed on Google search pages, including:

Given the number and complexity of Google’s ranking signals, organic results are in a constant state of flux. Pages that appear at the top of the organic results section of the SERP one day may not necessarily be there the next.

Although experts in the field have long speculated about how Google’s algorithm takes ranking signals into account, the precise details remain closely guarded secrets. There are, however, certain best practices that many experts follow in order to increase the chances of gaining a prominent position within the organic results on the Google SERP. This practice is known as search engine optimization, commonly abbreviated to SEO.

Although SEO is beyond the scope of this field guide, WordStream has many resources dedicated to optimizing pages for search engine discovery – see PPC University for more information.

As discussed in Chapter One, Google monetized its search engine technology in 2000 to create a sustainable source of revenue.

In the early days, AdWords advertisements were limited to small, text-based ads that were displayed above and to the right of the organic results on the SERP. Today, however, there are dozens of advertising formats and options available to advertisers seeking to leverage Google’s enormous reach.

Although Google has diversified its advertising business to include many more types of ads since AdWords was launched in 2000, text-based ads – more commonly referred to as pay-per-click ads – still form the basis of what is known as Google Search Network advertisements.

As Google has evolved, the format of search network ads has changed slightly, but today’s ads often boast enhanced features designed to increase click-through rates, such as ad extensions. Note the additional information displayed alongside the ad copy in the examples in the figure above.

Text-based pay-per-click ads can appear above, to the right, and beneath organic search results.

With more than half of Google searches now conducted on mobile devices, Google has adapted and evolved to place greater emphasis on results personalized based on the user’s location.

Local ads are typically displayed toward the top of the Google SERP, and are often accompanied by relevant information such as user reviews and maps, both of which enable users to make informed decisions about whether or not to patronize these businesses.

In 2012, Google introduced Shopping Ads. This enabled e-commerce websites to promote their goods through another carousel-type ad format that displays an image of the product relevant to the user’s search, along with pricing information. Shopping Ads are usually displayed prominently above organic results, but may also be shown elsewhere on the SERP.

In addition to providing Google with another revenue stream, Google Shopping also offers consumers a valuable service, as it allows them to compare prices of products from several similar retailers without the need for a third-party price comparison website – or redirecting users to non-Google web properties.

In recent years, Google has become increasingly sophisticated at determining user intent based on search queries. As Google’s algorithm has developed, several new types of results have been introduced to further enhance the user experience for searchers using Google.

Although the following examples can all be considered “organic,” they differ fundamentally from the indexed organic results discussed in Chapter Two due to the ways in which Google gathers and displays this information.

Google first introduced the Knowledge Graph in 2012, and in the intervening years, it has changed the way people casually search for information.

Typically appearing to the right of the organic link results, the Knowledge Graph pulls information relevant to a user’s search from various sources around the Web and compiles them into a single source, allowing users to quickly and easily discover information based on their query without leaving the Google search page.

Depending on the user’s query, Google SERPs may also include a branded Knowledge Graph focusing on information pertinent to a specific organization or individual.

For relevant searches for an organization, the branded Knowledge Graph can contain data including: 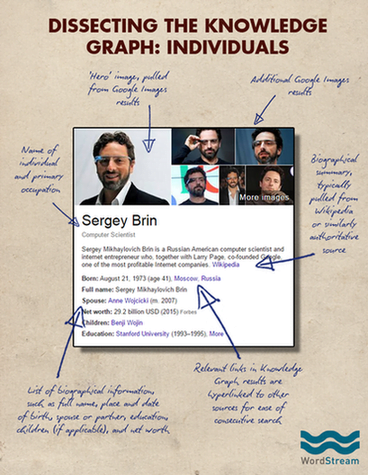 The branded Knowledge Graph for individuals typically contains information including:

Google first announced it would begin indexing and displaying nutritional information in its SERPs in 2013. Depending on the nature of the user’s query, this data can be displayed alongside other informational results, typically to the right of the organic results in a position similar to that of the Knowledge Graph.

Further building upon the Knowledge Graph, Google’s Answer Box allows users to quickly and easily find answers to their questions without leaving the SERP.

For example, prior to the introduction of the Answer Box, a user who wanted to know which film won the Academy Award for Best Picture would enter their question before being presented with a list of sites that might offer the answer. Now, however, the user does not have to leave the Google search page, as the answer to their question is presented prominently above the organic results.

Google’s Hummingbird algorithm update has further evolved to handle increasingly sophisticated user queries, particularly those well-suited to the Knowledge Graph. On mobile devices, Google’s virtual assistant Google Now, together with the developments introduced in the Hummingbird algorithm update, has become remarkably adept at not only answering questions but also interpreting complex contextual meanings and the semantics of search queries.

This allows users to ask sequential questions tangentially relevant to their original query, and Google can effectively parse these queries and offer relevant results on related topics – all without requiring additional information from the user.

The Evolution of Search

As the expectations of Internet users become more demanding, Google will doubtlessly continue to develop and refine the SERP to improve the user experience and deliver users the information they want, where and when they want it.

The Google SERP has undergone vast changes since it was first observed in the wild. There can be little doubt that it will continue to evolve in order to survive – and thrive – in the rapidly changing ecosystem of the modern Internet.