It can take a while to start working, and then, once you get used to seeing double-digit growth in organic traffic year over year – suddenly you hit the dreaded plateau. It’s harder and harder to make serious gains.

See how the slope of growth is less steep toward the end?

I remember the days where there were lots of spammy tricks you could use to get mediocre content to rank. (Not that I myself would ever create mediocre content. Nope. No way.) That’s not so easy anymore – in part because Google’s algorithms have gotten a lot smarter, and in part because the competition is simply greater. There are more sites and businesses, but the first page of results hasn’t gotten bigger. Not that it would matter if it did – few people scroll to the bottom or click to page 2.

Recently, doing my SEO reporting, I’ve noticed a few cases where a page on our site has seen a dip in organic traffic. However, when I check to see if we’ve lost our ranking, we’re still on the first page, or even ranking at #1. So what gives?

I suspected that changes to the Google SERP, such as the introduction of fancy new SERP features, were lowering our organic click-through rate (CTR), so I did a little digging to find out what exactly was going on.

A note on study methodology

For this study, we looked at 24 keywords (from our own site) where we’ve maintained the same or very close to the same ranking for about two years (between May 2015 and April 2017) according to Search Console data. In most cases the keyword maintained a #1 ranking, but for some keywords the average ranking for the period is reported as 1.1 or 1.2 due to some ranking flux. Results were not filtered by device or country.

I would characterize the majority of these keywords as informational. Only one of them is clearly commercial (“ppc software”) and one is potentially branded or navigational (“free keyword tool” is ambiguous, since it’s both the name of our tool and a generic phrase). More on what these keyword categories mean here.

And thanks to my smarty-pants colleagues Meg Lister and Josh Brackett, who are approximately 9 million times better at Excel and statistics than me, for helping me analyze this data, and to our new designer Kate Lindsay for pretty-ing up the graphs.

The upshot: Median CTR is down by 37% 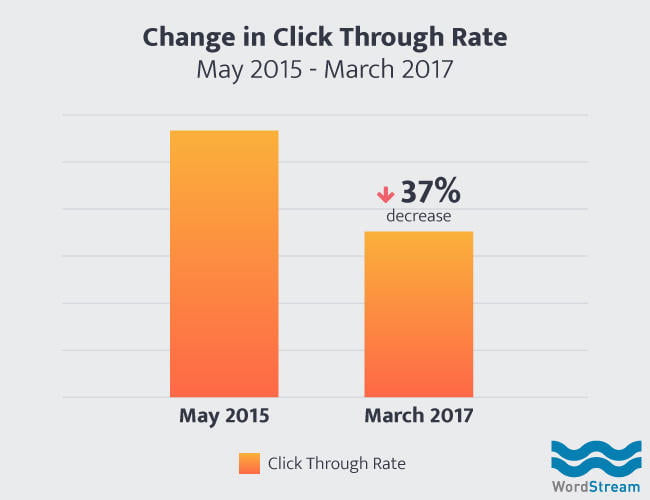 It’s important to note that I didn’t cherry-pick keywords to fit a narrative. These were the first 24 keywords I found where our ranking hadn’t changed significantly in two years.

How has organic impression volume changed?

Impressions for this keyword set were up overall (by a hefty 63%) – however, due to the fall in CTR, we weren’t able to capitalize on most of those impressions to drive growth. Clicks only increased by 21% in the same time period. 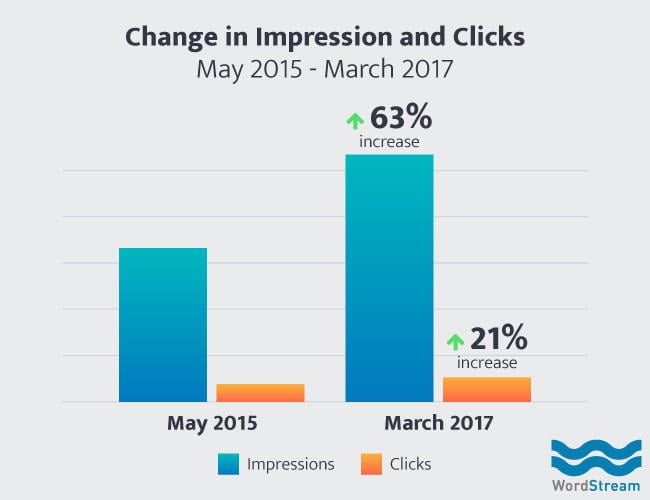 How do Featured Snippets affect CTR?

Of the 24 keywords, there were 17 queries where we own the featured snippet. For these keywords there was an average position change of 0% and a median CTR change of -39%. That means even with the coveted Featured Snippet, organic CTR for a #1 ranking is lower in 2017 than it was in 2015.

And it’s not because we’re competing with more ads – 16 of these keywords have no ads on the SERP at all. 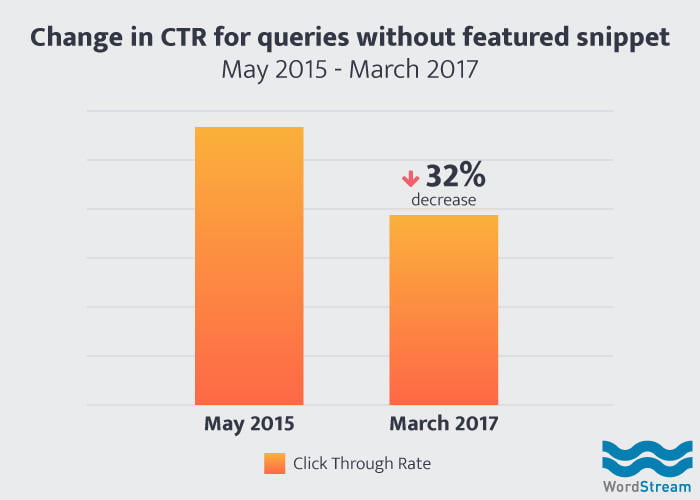 This would make sense for simple question-type keywords that can be answered right on the SERP, like “how tall was Abraham Lincoln,” “when is the Super Bowl” etc. See also the recent kerfuffle over Celebrity Net Worth – a website that has taken a major hit due to Google’s Featured Snippets making it largely unnecessary to click through to discover what a celebrity is worth. 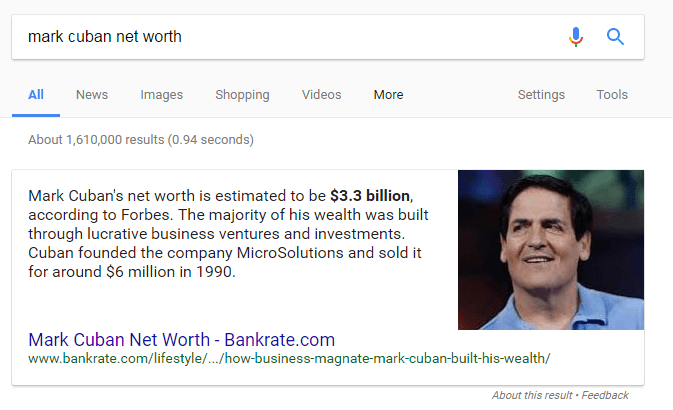 This is why I think it’s so important to answer COMPLEX questions if you want to drive value from Featured Snippets.

But most of the keywords I looked at weren’t simple questions, or phrased as questions at all. So there’s actually no reason to assume that people were looking for a quick answer. For example, two of the keywords were “great marketing ideas” and “keyword strategy.” To me it’s pretty clear that the intent with these is relatively deep; they’re looking for multiple ideas or a complex strategy, not just a definition.

So why has organic CTR for a #1 ranking fallen?

Here’s the tricky part: Why is this happening? It’s not immediately obvious.

Are we losing clicks to ads?

It would be easy to assume that organic CTR has fallen because Google has increasingly moved to monetize the SERP – for example, just last year Google increased the number of top ads from three to four (while simultaneously removing the right-rail ads). 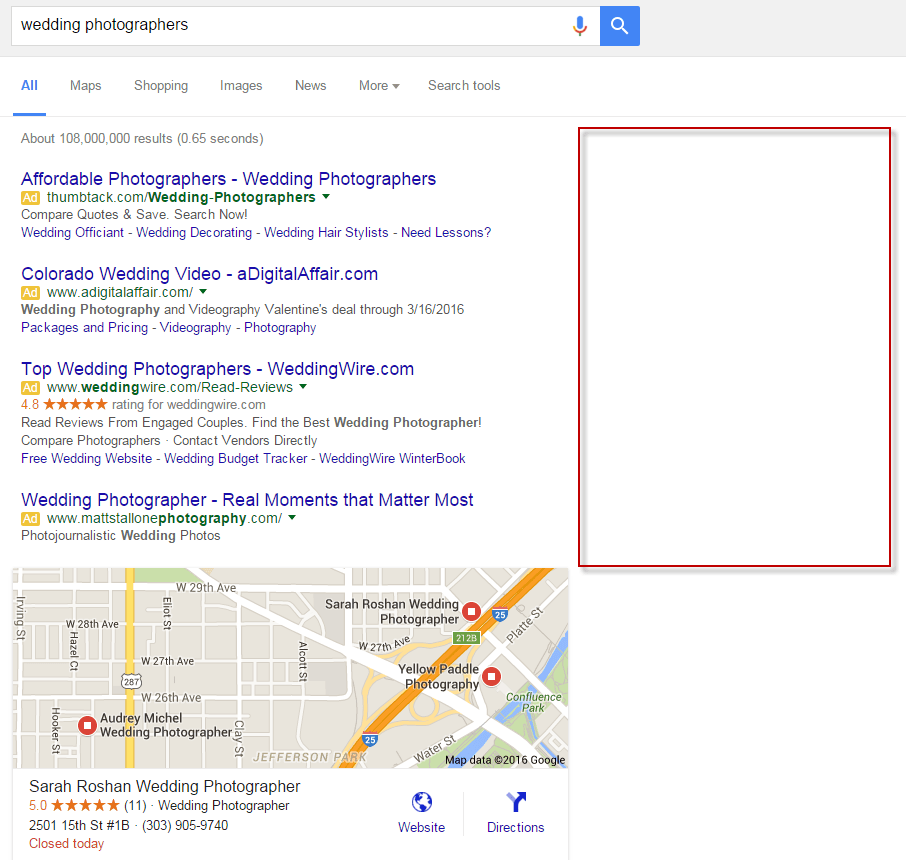 Old enough to remember when there were ads there

However, that change has minimal impact on this keyword set, since only four of the 24 keywords we looked at were triggering ads at all, and of those four, only one triggered four top ads. Two of the keywords triggered just one top ad, and one triggered no top ad but a panel of sponsored results on the right (on desktop).

Incidentally, the keyword that now triggers four ads showed exactly the median drop in CTR (-32%). It wasn’t an outlier in terms of losing clicks to ads.

What about other SERP features? 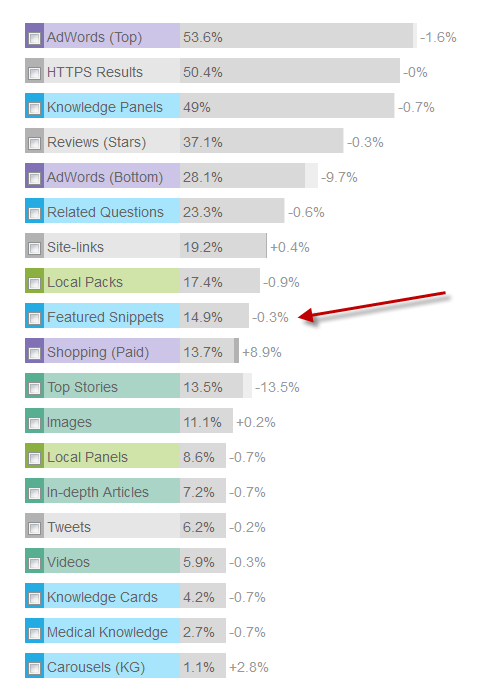 10 of the keywords also triggered a “People also ask” feature (Related Questions), like the below.

In a different industry, we might have seen a lot more features in the results – images, videos, knowledge panel, local packs, card-style carousels at the top, etc. That wasn’t the case in this particular keyword set.

Now, Moz recently published some fascinating data (in collaboration with Jumpshot) that reveals a full third of searches result in no clicks at all. People do a Google search and then click nothing. Says Rand Fishkin:

If we look at all search queries (not just distinct ones), those numbers shift to a straight 60%/40% split. I wouldn’t be surprised to find that over time, we get closer and closer to Google solving half of search queries without a click.

In other words, Rand predicts that CTR will continue to fall even for #1 rankings as Google releases features that make clicking any result unnecessary.

Is this a mobile problem?

One possibility for the drop in CTR is that a greater percentage of our site traffic is mobile now than it was 2 years ago – mobile devices account for about 20% of traffic now, compared to 13% in May 2015. 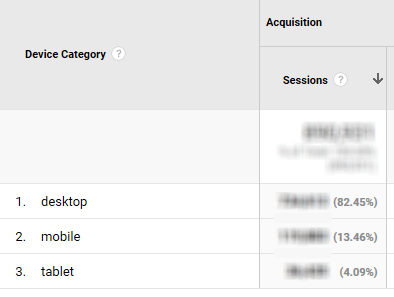 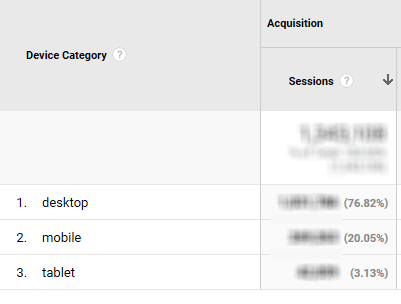 (As mentioned, I didn’t break the above click-through rate data out by device; I download reports from Search Console monthly, but not device reports, and at this point I can’t go back and get that data from 2015.)

On mobile, organic CTR looks a little different than it does on desktop. Again, according to Moz/Jumpshot data, organic CTR is lower on mobile devices than on desktop – Rand says:

So well more than half of mobile searches don’t result in clicks.

That means it’s not just the increase in mobile search share, but that CTR’s are falling across all devices.

None of these explanations (more and larger ads, other organic features, or shifts in mobile usage/behavior) fully explain the dip in organic CTR that we’re seeing, but it could be a combination of these changes along with other, smaller ranking factors. Heck, maybe people are just more distracted than they were two years ago, so we’re seeing a higher incidence of people doing a Google search and then dropping the task to watch a squirrel out the window…

This was our own, wordstream.com account data so we’re only looking at one vertical: marketing. The results may be very different for different industries. I can actually imagine the average CTR falling much more for industries that do less content marketing than we do, meaning more of their keywords are going to be commercial vs. informational.

How to combat falling organic CTR’s?

Feeling dispirited? Me too, honestly, but your focus shouldn’t change too much:

In short, though our data set was limited:

We were surprised, to say the least.

What do you think? Have you seen similar changes in your industry?