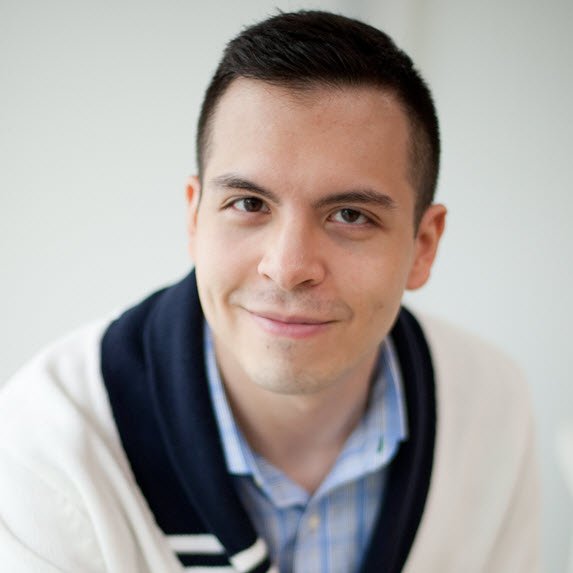 Copywriting is the science and art of using the right words to sell a product or service. Famed ad exec David Ogilvy, regarded as the father of advertising, notably said:

“I don’t know the rules of grammar. If you’re trying to persuade people to do something, or buy something, it seems to me you should use their language.”

That’s what copywriting really comes down to: Using specific language in such a way that it increases the sales—or, in a more modern context, conversions—of an online store.

Words matter crucially, when it comes to writing effective and high-converting copy. As you’ll see in the following case studies, even something as seemingly inconsequential as switching up one or two words in a call to action, product page, or landing page can produce impressive conversion lifts, which equals lots more sales and revenue over time.

These copywriting changes are easy to test—why not see if they make a difference to your conversions?

People take synonyms for granted. While they convey the same meaning, the curious thing about them is that people online often react quite differently to which specific word your store uses. This difference can amount to hundreds of thousands of dollars in revenue…making it a huge impact for such a small word. Depending on the size of your business, that’s not chump change.

That’s what Black & Decker found out when they decided to run some A/B tests on one of their product pages.

One of Black & Decker’s trade names is DeWalt, a power-tool maker. On the DeWalt website, the main call to action originally featured the button copy “Buy Now.” After the Black & Decker team analyzed the page, they hypothesized that changing the word “buy” to “shop” would have much less of a commitment sound to it, thereby potentially encouraging more click-throughs.

So the team ran the A/B test. In sharp contrast to their hypothesis, “Buy Now” was actually the more successful CTA, resulting in 17% more click-throughs than “Shop Now.”

Sound like a small difference? Projected over an entire year, this equaled six figures in revenue.

Suffice it to say, it’s good the team A/B-tested before implementing their hypothesis. Not only does this show that you should always A/B-test instead of just recklessly implementing changes, but it also demonstrates that changing one little word on a product page can swing a lot of money in either direction.

Product pages love to feature low-price guarantees as a persuasive element to drive more sales. While these have been shown to help drive conversions, sometimes it’s seals of authenticity that do a better job in that regard.

In this case study, it’s also a change of just a few words that leads to a substantial conversion increase for an e-commerce retailer.

Express Watches was a UK-based retailer of Seiko watches. However, their biggest problem was concern over the authenticity of their Seiko watches. Customers weren’t 100% sure that these were the real deal.

Digital-marketing agency High Position structured an A/B test around this customer distrust. The control page featured the phrase “Never Beaten on Price” on the right side of the product page. They designed the test so that the variation would more clearly communicate that this retailer sold only legitimate Seiko watches. High Position hypothesized that the phrase “Seiko Authorized Dealer Site” would be the phrase that would allay these customer fears and lead to higher conversions. 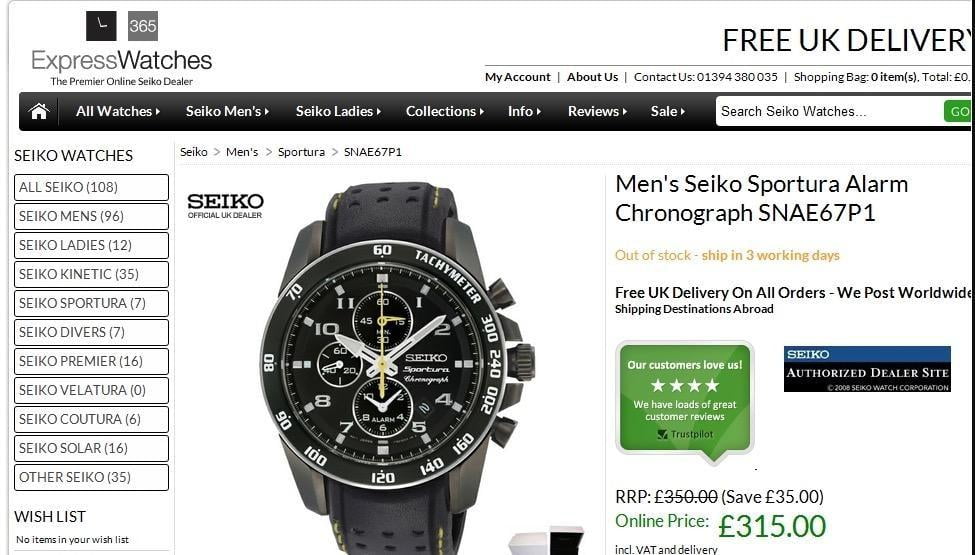 The new phrase replaced the original on the same part of the page.

High Position discovered that this seemingly insignificant change in copy, involving only four words, would lift conversions. They were right.

Shoppers pay attention to even the smallest alteration in words on pages, so be sure to regularly run A/B tests when you hypothesize that a new word or phrase might have an impact.

📣 Free guide: The 36 Best Call to Action Phrases (Ever)

Web forms can be tricky to properly optimize. As with anything in digital marketing, the only way to know for sure is to run A/B tests.

B2B Iron Mountain enlisted the help of iProspect, a digital-performance agency, to optimize the quality of leads generated from its form. One of Iron Mountain’s biggest issues was that it strongly suspected its form of unclearly communicating to leads what they should input. A large part of this fell on the headline, which in the original form read “Contact us today.” The problem with that was the form was intended to get leads to ask about the B2B’s business solutions.

Therefore, in the A/B test, the treatment’s headline read “Request a quote,” which clarified the goal of the form much clearer. The treatment form also included visual-form validation to better guide users.

Iron Mountain believed these changes would improve both lead quality and, therefore, revenue.

They were right: The treatment form produced a 140% conversion lift, which happened to be the best lead quality the B2B’s sales team ever experienced.

While it may seem like there was not much of a difference between “contact us” and “request,” the context in this case study was all-important, as “request” spoke more directly to the purpose of the form, which was to inquire about Iron Mountain’s business solutions.

4. We All Love Free Stuff

Sometimes, explicitly spelling out to your site visitors that something is free works wonders on the conversion rate. Job recruitment-and-online-address-book app Viadeo, formerly Soocial, discovered this through a straightforward A/B test on their homepage.

Their homepage had a huge, green CTA with the phrase “Sign up now!” prominently displayed. The goal was to increase sign-ups, so Viadeo flirted with several hypotheses and variations.

They tested everything including:

Note also how the “It’s free!” copy wasn’t exactly the most easy to read (it was a small, subtle font), but it still did the trick, just because of the word “free.”

5. A Few Words for Regional Personalization

Another case study from WiderFunnel involves a short phrase and a hypothesis about regional personalization. In this scenario, a relatively small-sized caption underneath a field boosted conversions for an insurance rate-quote form.

The DMV—everyone’s favorite state-level government agency—is often a place where people get frustrated or confused due to bad service. DMV.org—which is actually not a government-owned site, but provides consumers with information to simplify their DMV experiences—wanted to optimize its conversion rate by providing better service to its customers on its webpages.

DMV.org’s challenge was that they had only a very small optimization team and so couldn’t run the A/B tests they required to try out better-performing variations.

In one test WiderFunnel ran, they looked at an underperforming insurance-quote form, particularly the absence of captions underneath the fields. They hypothesized that regional personalization—adding state-specific references to where the quotes would be coming from—would lift conversions.

When they added a short caption, Get quotes from top providers in New York, the variation form increased revenue by 3.9%. The original form had no caption underneath the field.

It just goes to show you that the smallest changes—from a standpoint of the number of words and the font size of additional copy—can make substantial improvements to revenue lifts.

6. Quote Vs. Pricing—Aren’t They Synonyms?

You may be tempted to think that some changes are just distinctions without a difference. If you were going from a purely semantic point of view, you may be right…but if you’re looking at things from a business perspective, you’d be pretty far off base.

In perhaps one of the largest conversion rate increases ever based on changing just one word alone, “quote” was substituted for “pricing.”

Veeam Software, a developer of products for data protection and virtual-infrastructure management, conducted a survey asking its visitors what other information they’d enjoy seeing on a product page. Most of the responses indicated that visitors wanted to see pricing information. 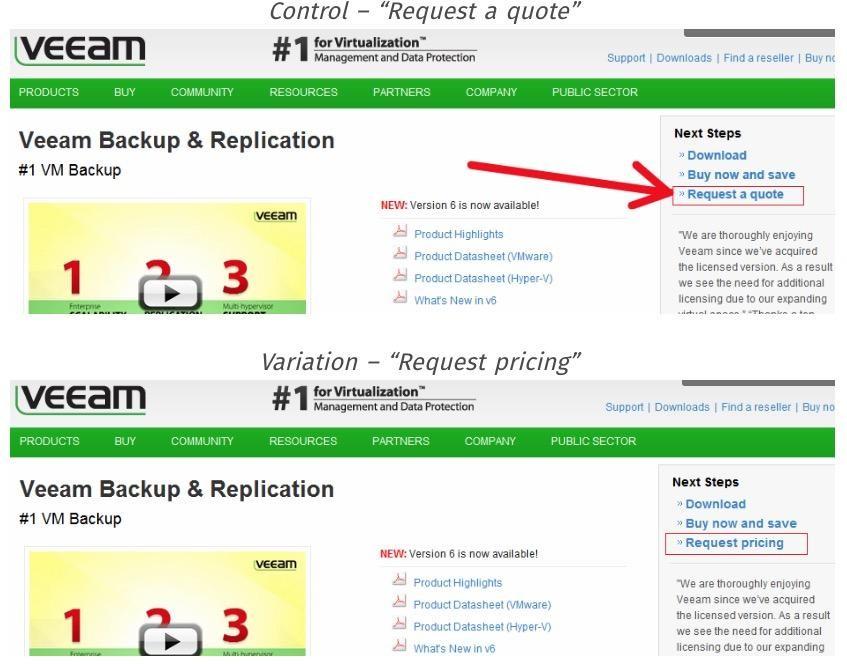 Armed with this feedback directly from their customers, Veeam Software hypothesized that changing the product page’s anchor text to “Request pricing” from the original “Request a quote” would yield good results.

The click-through rate jumped by 161% from that one-word change alone!

Let’s Hear it for the Power of Words

These case studies prove that you should never underestimate the power of words to boost your conversion rates. Copy on any page has the power to motivate people to convert. The key is knowing what words have power.

The truth is that none of us ever really knows, which is why it’s a must to always A/B-test your landing and product pages, along with specific words in the CTAs.

Start with a hypothesis, and once you run that A/B test and you see higher conversions…you’ll know you’ve struck gold.

Marc Schenker is a copywriter and marketer who runs The Glorious Company, a marketing agency. An expert in business and marketing, he helps businesses and companies of all sizes get the most bang for their ad bucks.

See other posts by Marc Schenker