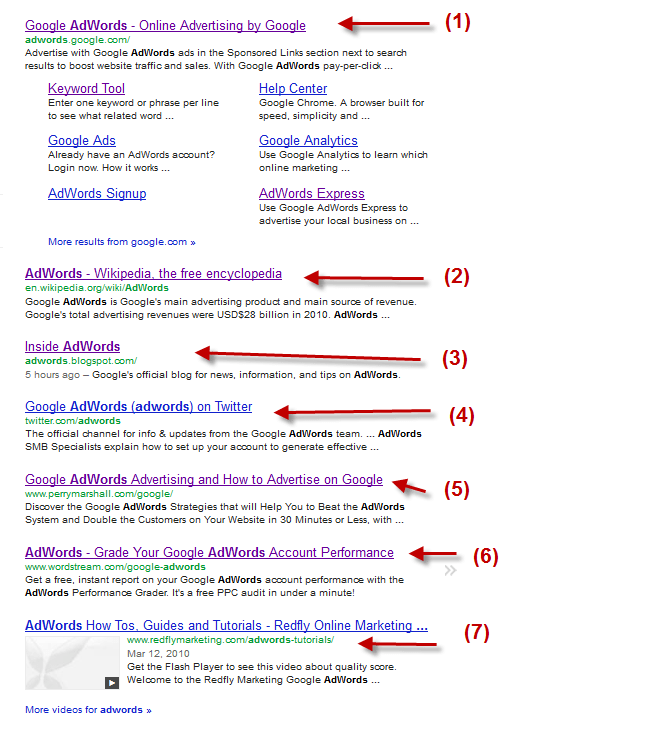 Dr. Pete noticed that too, and yesterday he reported on the SEOmoz blog that Google had reduced the usual 10 search listings to just 7 on over 18% of Google searches! In my article today, I’ll just quickly summarize his rather incredible findings pertaining to the Incredible Shrinking Organic SERPs, and follow that with my own analysis and thoughts.

First, here’s a graph of the percentage of first page search results with fewer than 10 organic listings since April 4, 2012:

In just two days, sometime around August 12-14, the number of first page search results with fewer than 10 organic search listing jumped from under 2% to over 18%! Wow.

What Search Queries are Impacted by the Google SERP Change?

Intrigued with Dr. Pete’s analysis of the new Google SERP, I quickly conducted my own investigation into WordStream.com’s own top 200 organic keyword listings to try to determine what kinds of keyword searches were impacted by the change. To quote the great Dr. Pete: “a sample size of less than 200 is a slap to the face of any God-fearing SEO!” Anyway, in my admittedly small sample, here’s what I found:

So, based on my rudimentary research, I conclude that keyword searches with organic sitelinks, which tend to be branded/navigational searches – appear to be showing 7 or fewer organic listings, instead of the usual 10.

Update: I saw dozens of google searches with just 5 organic listings this evening! Are you seeing what I am seeing? Let me know in the comments below!

So what’s the big deal? Who Cares?

Here at WordStream, I’ve done a lot of SEO work to drive a ton of organic traffic to my site every month. Before this most recent update, one of the oldest plays in the SEO playbook was to land a first page organic search listing for a relevant, high-volume, branded keyword search.

As a real-world example, take the keyword search “adwords,” which is a branded/navigational search. Most of the time, the people who search for “adwords” are just looking for the login URL for AdWords, which is adwords.google.com – but since that’s hard to remember, the vast majority of the time, people just do a Google search and then click on the link to the AdWords login page. Heck. That’s what I do, and I even happen to know the AdWords login URL. It’s probably because I’m lazy and it’s fewer keys to type out!

My company has historically had a page that ranked organically on page 1 for searches on “adwords” – our AdWords Grader tool. (It’s a tool that does a free, instant audit of your Google Ads account.) Through various content marketing and PR efforts, we were able to acquire enough high-value organic links to rank on page one of this incredibly competitive search term.

Here’s the organic search query data for the “adwords” keyword from my Google Webmaster Tools account – I’ve blurred out some of the data here because I usually don’t share Web analytics data – but my key point here is that we were averaging the 8.4th position over the last month in the United States.

That used to constitute a page one listing, but now that Google has switched this search results page from 10 organic listings to just 7, sadly, the AdWords Grader (on average) no longer makes the first page (organically) for searches on “adwords”!

The click-through rate on my organic listing for “AdWords” was pretty low, but when you factor in the hundreds of thousands of monthly searches in the US alone, we were still talking hundreds of organic clicks per month, plus we were benefiting from a “branding” value of showing up on the first of organic searches for “adwords.”

It was almost as if I was doing “free” display advertising to everyone who was interested in AdWords, since the CTRs we were enjoying were roughly in the neighborhood of what you would expect to get running ads on the Google Display Network.

Sadly, after close to a year of living large off that awesome first page listing on a pretty strategic branded organic search result for my business, it appears that my remaining options are to:

Why is Google Making Changes to their SERP?

I see the benefit. If the query is clearly navigational, then searchers don’t look (or click) very far into SERPs. That’s been a known fact for well over 5 years.

If the query is a combination informational/navigational, again I see the benefit. SEOs need to stop injecting their personal opinions onto web searchers. Their intent isn’t always the same as our personal opinions…

… searchers with clear navigational intent don’t look (or click) too far down the page. Query reformulation or refinement is quite common if a navigational query doesn’t deliver the most relevant results at the top of the SERP. This is true on desktops, tablets, and mobile/cell phones. I (and my company staff) observe a lot of navigational queries on cell phones.

Wow. Well said Shari. So Google could definitely argue that the change is motivated by user experience.

The user experience argument is one that I’m quite familiar with, having 10+ years background in paid search. In AdWords, one of the first things you learn is the importance of Quality Score, and how Google would rather not show your ad at all than monetize an underperforming ad for reasons of user experience. It would appear that Google is adopting a similar philosophy on the organic search results listings.

But that doesn’t mean that Google isn’t trying to stick it to SEOs. They could be doing it for both reasons. I guess it just means they have some cover, kind of like how they claimed that the Keyword Not Provided brouhaha was supposedly all about protecting user privacy.

New Google SERP – What does it all mean?

To quote the great YouTube philosopher, Hungrybear9562 – What does it mean??

Before writing out my thoughts here, I will say that I have been criticized by many people for being critical of the value of SEO as the founder of a PPC management software company. All I can say here is just to re-iterate that:

So with that said, here goes!

My recent post on PPC vs. SEO for High Commercial Intent Keywords didn’t specifically tackle branded/navigational keyword searches. However, if we did, I would today seriously consider putting navigational/branded keyword searches in the “better for paid search” column, or at the very least, leaning towards paid search. Reasons for this include:

Actually, as I am writing this post, I’m seeing dozens of branded/navigational searches with just 5 organic search listings! If this trend continues, organic search on navigational/branded keywords will be even that much harder.

The Long-Term Value of SEO: Does SEO Value Last Forever?

Recently, I wrote a (very controversial) blog post that questioned the long term value of SEO. It said among other things, to not be dependent on SEO, because Google giveth and Google taketh away. It concluded that SEO is many things, but predictable and forever it is not.

I think that when Google decides to do stuff like wipe-out around 5.5% of organic first page listings overnight, this is Google taking away. I think that these kinds of monthly changes puts into question the long term value of SEO. Like in my example, clicks that used to be in the bag, like my stable 8.4 average ranking on searches for ‘adwords’ and the steady stream of clicks it faithfully generated for years, is suddenly no longer as valuable as it used to be.

It’s especially annoying if you consider what a pain in the butt it was to get that seemingly impossible first page listing in the first place.

More Shots Fired in the War on Free Clicks

I don’t think the timing of this change can be dismissed as a pure coincidence. Especially when viewed as a timeline over the last year, you can see a pattern of Google stepping up their efforts to make SEO harder and more confusing – take for example, last month’s confusing unnatural links notifications, and now this month, by wiping out approximately 5.5% of first page organic search results (Google’s first page used to be described as “10 blue links”). I believe there is just too much going on here to all be a coincidence. (Click the image below to enlarge.)

I suspect that this trend will continue, every month. It’s basically how Google will continue to grow their quarterly revenues and earnings. Google did nearly $40 billion in revenues last year. To grow their business by 25% this year, given that average CPC’s have been falling, by my own estimations, I think they basically need to find approximately an extra 24 billion clicks on their ads. That’s got to come from somewhere!

Regardless of if you disagree with the layout of this new Google SERP, what do you think my take of what’s happening on the SERPs here?!