It’s January, which means you’ve probably read about 200 expert predictions on the future of SEO in 2017 by now. But if you stick with me, I promise this post won’t be like any of the other SEO predictions posts you’ve seen so far. You know…

When it comes to making SEO predictions, a lot of experts take the safe route. We all know mobile SEO is going to be increasingly important. Talking about the obvious is always safe.

If you’re anything like me, the SEO predictions for 2017 have let you feeling underwhelmed. No one has been sticking their neck out this year.

Mobile will be big?

I think it’s time for a few more bold predictions – nine of them in fact. These SEO predictions will be a bit more out there – maybe you could even call them a little crazy.

Just don’t blame me if/when these predictions become reality. I’m just the prognosticator, basing my predictions on the things I’ve seen lately – and where I believe Google is heading next.

1. We’ll Experience the Biggest Rankings Shift in the History of Google…

So here’s my first SEO prediction for 2017: We’ll see the biggest shift in rankings in the history of Google.

Machine learning and AI was an undeniable force in 2016. And I expect machine learning signals to become a bigger and bigger piece of the pie. In case you’re unfamiliar with RankBrain, here’s a simplified diagram that breaks it down:

RankBrain helps Google select and prioritize the signals it uses for ranking. Engagement is one of the very important signals Google looks at for ranking.

It’s been my theory that RankBrain (and/or other machine-learning elements within Google’s core algorithm) are increasingly rewarding pages that have high user engagement. In other words: Google has built its own ultimate unicorn detector to ensure that the pages people are clicking on and engaging with the most are rewarded with better search positions.

2. …But Nobody Will Notice Anything!

Remember how, for a few months before RankBrain was officially announced in that Bloomberg article, everyone in the SEO industry knew a big algorithm update  was brewing? Remember all the discussion on Twitter, Facebook, and the top search industry publications?

Yeah, me neither because it absolutely didn’t happen!

So here’s my second SEO prediction for 2017: Even though we’re about to see the biggest shift in the history of Google rankings, nobody will notice anything.

RankBrain is more subtle than updates like Panda and Penguin, where up to 90 percent of your organic traffic disappeared instantly overnight. It was easy to see such a ridiculously huge traffic drop, that occurred on a specific date, in your analytics.

But with RankBrain, the rankings shift is happening every day, bit by bit, rather than all at once in one big update. Google is shifting traffic away from your donkeys (pages with average or below average engagement) and toward your unicorns (pages that have 5-10x higher engagement metrics than normal).

Whatever SEO rank-checking tools or weather reports you’re looking at aren’t set up to notice these small and gradual types of changes. They just get lost in the noise.

Why is Google’s featured snippet so often different from its top-ranked organic listing? Basically, Google is currently saying to its users: “Our first listing isn’t really the correct answer, so use this other answer instead.”

Huh? Why isn’t the first listing simply “the answer” instead?

My third SEO prediction for 2017: Google’s featured snippets and organic listing will converge.

Here’s my theory. Snippets were just a sandbox/testing environment where they could try out user engagement signals in search and the rest of the rankings didn’t use them. Now that they’ve bought into this idea, they can consolidate the two concepts.

As a result of new user-engagement signals being used in search rankings, fewer and fewer people are clicking on results in lower positions, while clicks on the top positions are trending higher. Check out this surprising click curve WordStream put together:

(Note: This data was obtained from the Google Search Console, tracking the same set of keywords in the Internet marketing niche for three separate 30-day periods)

This chart really illustrates the idea of a subtle change, as discussed in my second prediction.

What’s it all mean? That it’s time for my next SEO prediction: Google will eliminate the bottom half of search results in 2017. (Bonus prediction: SEOs will freak out BIG TIME!)

As a result of machine learning, I believe Google will decide that it no longer needs to show positions 6-10. The decluttered SERP will be populated with more ads (which will generate higher CTRs than the organic listings they replaced).

Think it can’t happen? Let me remind you of that time waaaay back in early 2016 when Google killed right-side text ads on the desktop. But when you looked at the data, it made sense why Google did it: only 14.6 percent of desktop clicks came from the right ads.

I imagine the same will be true when Google eliminates the bottom half of search results. The actual impact for most websites should be minimal because most people aren’t clicking on those organic listings now anyway.

The local SEO train has gone on for way too long. These are 100 percent commercial queries and Google’s next big land grab.

There’s no easy way to cushion the blow for my fifth SEO prediction for 2017, so I’ll just say it: local SEO as we’ve known it will die.

Google already has a pretty lengthy list of tactics that are against its Webmaster Guidelines. Well, expect that list to expand in (or after) 2017.

One thing we’ve been talking a lot about so far in this post is the importance of engagement metrics and how this can impact your SEO success. This includes metrics from click-through rates, to dwell time, to task completion rates (a.k.a. conversion rates).

Well, you know how it goes. Anytime somebody sees some success with an SEO tactic, then everyone starts doing it. But a select few who can’t make that tactic work legitimately will figure out a way to fake it.

This is exactly how the whole link buying problem got started 10 years ago. People knew links increased rankings, so people went crazy buying links, not worrying about quality, only quantity.

Which brings us to SEO prediction number six: CTR and engagement hacks will become the new black hat SEO.

Look for huge spammer innovation once more SEOs finally start realizing that improving CTR and dwell time also can help improve rankings in today’s machine-learning world. The black hat revolution won’t be televised, but people in the know will know all about it.

Why does Google have a TOS (terms of service) and not enforce it?

Companies like Raven Tools have been bullied to not include rank checking. But Google allows it on some tools but not others?

So, my seventh SEO prediction is that Google will declare war on tool providers that violate their TOS.

Why should Google care more about this now? Probably because rank checkers screw up CTR and bounce calculations.

A few Google people have tweeted about this actually.

If Google wanted to be really mean about it, they could devise a kind of penalty where if they found that you were doing excessive rank checking of your domain, they could infer you were violating the TOS.

8. An SEO Company Will Die

Following on the previous prediction, and other factors, here’s my next SEO prediction for 2017: one or more major SEO vendors or service companies will be sold off.

Google sometimes “makes an example” of a small company they believe is behaving badly by publicly punishing them so badly that they close.

9. SEO Will Be More Valuable Than Ever

Though much of this post may seem like doom and gloom, one thing’s for sure: SEO won’t die. (Though it’s an extremely safe bet the entire practice of SEO will be declared dead and/or dying at least a few times this year!)

Despite all of its challenges (and the many more on the horizon), SEO will be an even more valuable marketing channel to the lucky winners in 2017 and beyond. 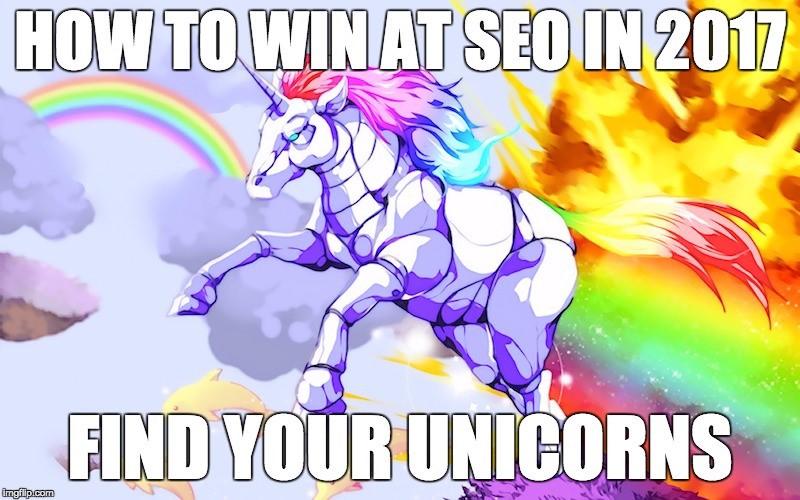 So find and focus on your unicorns!

The over/under for these predictions is 50 percent. What do you pick? Over or under? Which do you think will come true and why?