While the Creative Hub is riddled with superlative examples of big brands (with creative teams and swollen bankrolls) launching neat stuff on Facebook, it can be difficult to envision, say, an accountant or plumber or three-person startup creating Canvas ads.

That doesn’t mean you need to stay married to the same old static image creative (but hey, if it’s working, don’t abandon it: expand).

In fact, there are a handful of alternative ad types that can jumpstart your Facebook ad strategy that don’t require you go out and find yourself a Jon Hamm knockoff with a MacBook Pro.

With that, here are the three Facebook ad types you probably aren’t using yet (but definitely need to roll out across your account ASAP)…

Your audiences have achieved peak granularity…

Sometimes you just need to start a fire under someone’s ass to make them act. And, for many bargain-starved browsers, a good ol’ fashioned promotional discount is the perfect prod to incite a purchase.

So, why not sweeten the deal with a Facebook offer ad? 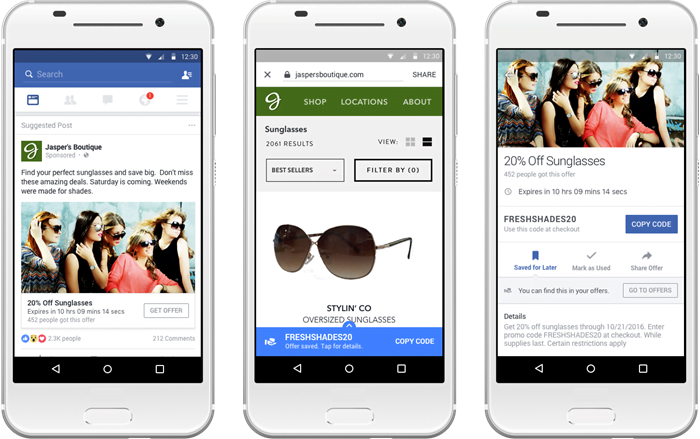 Offer ads are one of the best ways to get peoples’ attention on Facebook and prompt them to act.

They provide you with a handful of options in terms of the form and exclusivity of the promotion you’re pitching, and can serve as the perfect complement to your existing promotion-centric advertising efforts.

If you sell your wares online, prospects will receive notifications across all their apps and devices to remind them of your promotion.

But it’s physical stores that stand to benefit most from offer ads.

If you run a brick and mortar outfit, shoppers who walk through your front door can whip out their smartphones and use the offer served to them on Facebook in real life. They also get an email about the offer and—the best part—when they’re near your store, Facebook will remind them that you offer will expire soon: name another ad type with this many touch points!

(Note that your promotion will always appear in prospects’ “Offers” bookmark)

Interestingly enough, though, hardly anyone seems to be using these things.

Exploit their ignorance my friends.

Part of the reason offer ads might not be as widespread as they should be is that the option to create them only appears in your Ads Manager account if you select specific campaign goals (more on that in a moment) or boost an offer from your Facebook Business Page. Pretend I didn’t say that last bit; creating ads from anywhere other than Ads Manager is a fool’s errand.

Offer ads are made from modular components that can be stripped or added as you see fit. The title (which should probably, you know, tell prospects exactly how sweet a deal you’re offering) can be up to 50 characters in length; the details—the textual meat of the thing—cap out at 250.

It’s also important to note that you need to set an end date for your offer ads. Per Facebook, the ideal length for your promotion is 7 days; this is enough time for it to been seen, shared, and, most importantly, served up again as a reminder.

As I mentioned earlier, offers can be redeemed online (using an offer URL), in store, or both; you also have the option to add catch-all or unique promo codes to allow for more effective tracking.

The last two need-to-know kernels regarding offer ads are that you can control the total number of available offers and the ability to share promo codes directly from an offer ad; while you may feel inclined to err on the side of exclusivity, I’d suggest setting the bar prettyyyyyyyy high. After all, if you’re working with well-defined, engaged Facebook audiences, these folks probably have friends who’d be into your offer as well. In other words…

Now, the best way to get people to use the offers you serve up on a platter is to make your discounts substantial; Facebook recommends pushing things that are free or at least 20% off. Color me shocked.

Some caveats about offer ads

Facebook offer ads, versatile and powerful as they may be, do come without a few peccadillos. They can only be used when you choose the Traffic, Conversion, or Store Visits objectives (fail to do so and the slider that enables offer ads won’t appear in the Ad Set interface).

Finally, before you go ahead and activate an offer ad, make sure you’ve double and tripled checked everything: once pushed live, they can’t be edited or deleted.

Sure, images and carousels are effective tools for brand building, lead generation, and, you know, sales. But nothing captures the attention of the scrolling masses quite like video.

None of this is a secret.

Why, then, are so many SMBs sticking with stills?

When it comes to Facebook video ads the barrier to entry is far less daunting than you might think.

In fact, these days that statement applies to video in general. I mean look at Drift. If you’re a marketer in any sense of the world, you’ve undoubtedly stumbled upon at least one of their videos in recent months (on product launch days they’re positively unavoidable on LinkedIn). Outside of the small handful composed by their in-house video team, none of these clips are particularly flashy. Most are recorded on phones. There’s minimal production. And they clearly work. Because they keep makin’ ‘em.

You can bring this same DIY approach to your business’s Facebook ads. Yes, that’s right: Driving engagement doesn’t require a director, a green screen, and a $10,000 production budget.

Simply by virtue of being some shade of dynamic, a shocking number of people will stop and look. Hell, you don’t even need to get walk-while-recording-your-face-and-waxing-poeticcomplicated: you can use apps like Ripl (to add animation) or Legend (for text overlay) to turn existing static assets into quick, attention grabbing videos, then upload those assets to Facebook or WordStream Advisor (that’s right, we support video ads)…

And pair them the same audiences you’re already successfully serving ads to across Facebook, Instagram, and the Audience Network.

Watch what happens (you won’t be disappointed).

While your video ads don’t need celebrity guests or ice wall-melting zombie dragons to move the needle, there are best practices that should be adhered to if you want to wring was much value out of them as possible.

What does that last bit mean?

Most people who engage with Facebook video ads do so on their phones or while performing thirty other actions on a computer; in either case, they aren’t listening. This means that if your value proposition is spoken, a good chunk of your prospects (viewers you’re paying for) are going to miss it.

To ensure your message is received, add text to your videos (using one of the aforementioned tools), use images that makes sense without sound, and leverage the hell out of the ad text (90 characters), headline (25 characters), and link description (30 character) fields.

Last but not least, we have Facebook Messenger ads.

Messenger takes advantage of the fact that the majority of us have no interest in picking up the phone; most folks would rather talk with their fingers and thumbs.

Now, I am by no means the first person to extoll the virtues of Facebook Messenger. There’s a guy named Larry you might be familiar with who’s so convinced of its value that he went and started a company to help marketers tap into its utility by leveraging chatbots built on the platform. But while Facebook chatbots are capable of a million and one different actions, we’re here to talk about ads.

Facebook messenger ads can be as simple or complex as you like and come in two different flavors: click to messenger and sponsored message. Both are underused.

This is a mistake.

After selecting “Messages” as your campaign objective and choosing “Click to Messenger” at the Ad Set level, you’re directed to build out your audience, budget, placement, and ad scheduling as you would with any other Facebook ad type.

At the ad level, though, the “Ad Setup” interface has an additional button (below the standard fare) labeled “Edit Messenger Setup.”

More on what that’s for in just a second, but note that, in the event you gloss over this step, any prospects who clicks your ad’s CTA button will be taken to Messenger and served a default response. This is not the way to maximize an underutilized ad format.

Switching gears, sponsored message ads send a message to people who have an existing Messenger conversation with your business (duh).

By default, sponsored message ads are sent to everyone with an existing conversation with your business. If you’d like to reach a more targeted subset of your chatty compatriots, you can click “show advanced options” to open the regular audience creation interface.

In both instances, you customize just about everything, from the initial message to the custom responses that a user can choose from; in the event you’d rather use the opportunity to direct prospects to specific pages on your website, you can roll with hyperlinked buttons instead of suggested replies.

Using some combination of replies or buttons, you can drastically increase the speed and scale of personalized customer interactions. For a more engaging experience, you can let AI do the legwork by clicking, you guessed it, “Connect Your Bot.” But that, my friends, is a topic for another day.

What Are You Waiting For?

As a platform with a seemingly infinite number of targeting options and well over a dozen ad types, it’s easy to let paralysis by analysis dictate your Facebook advertising strategy. By implementing just one of the three ad formats discussed in detail today, you’ll give your business a distinct advantage over the competition. What more could you want?!