How to Get High-Quality B2B Leads with Facebook Ads

Allen Finn already wrote the definitive piece for WordStream on why Facebook ads can be great for B2B.

But at the time I write this, only 39% of marketers say they’ve even tried using Facebook ads to create conversations with B2B prospects, according to Zoominfo. 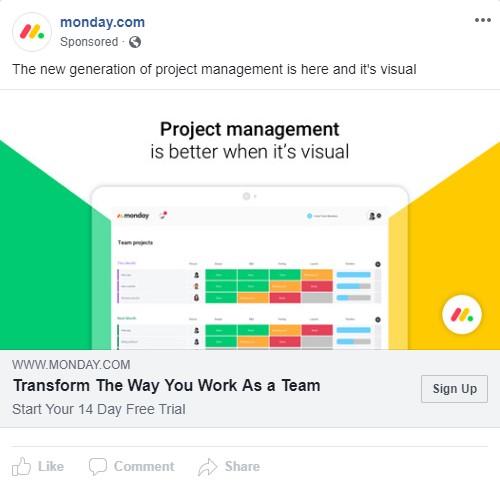 If Finn’s piece wasn’t enough to convince you, I’m going to share my own experience about why I think it’s insane that Facebook is so underrated for B2B, and I’ll tell you three ways to generate high-quality B2B leads.

According to Marketing Charts‘ summary of a Hubspot report, the average cost-per-B2B-lead for agencies in 2017, from all channels, was $172.72.

By contrast, when we run Facebook campaigns for our agency clients, it’s not unusual to see it as low as $50. In fact, here’s a screenshot from a real campaign we’re running for an agency client.

(And, as I’ll explain below, we’re excluding a lot of the cheaper leads because we focus on quality.)

So it’s clear there’s a gap between Facebook’s utility as a source of bargain B2B leads and how business owners and marketers perceive the platform.

Facebook’s reputation as a recreational network – in contrast to LinkedIn’s as a place where “serious business people” congregate – is doubtless responsible for some of the misunderstanding.

But I’ve also spoken to plenty of small businesses who have tried Facebook, and many believe it simply doesn’t work.

“We can drive clicks all day,” they’ll tell me, “but we never close any of them. They’ll almost all unqualified.”

One business owner I spoke to had gotten more than 50 leads in the last month, and only one was qualified.

Again, that contrasts with the results we’ve seen firsthand. For instance, here are some stats for a client campaign from the last ten days: 18 leads* for a total of $691.73 in ad spend. After an audit, we determined that seven of them appeared “qualified” (full-time entrepreneurs, legitimate websites).

That’s just under $100 per qualified lead.

All of which begs the question: if many business owners and marketers are only generating unqualified leads, what are the successful marketers doing differently?

In the remainder of this article, my goal is to share with you the things we know for sure moved the needle to improve the quality of B2B leads – as opposed to untested theories, or things that might have had an effect but we can’t isolate it – so that you can apply them in your B2B lead generation strategies and skip past the part where most businesses get stuck.

*The reason we get fewer leads overall – although many more qualified leads than some campaigns – is that we introduce friction in the funnel, by requiring people to certify they are full-time business owners, and/or meet a certain income level, before they can book-a-call.

Think about the last time you made a big procurement decision for your business.

Did you look at lots of options, compare a number of features, seek the opinions of others, and approach the decision deliberately and carefully?

Or did you immediately hire the first sponsored result that came up after a 15-second Google search?

If you said option two, then I’ve got a bridge to sell you.

In all seriousness, your clients likely arrive at decisions the same way. If you cater to million-dollar businesses with marketing departments, they don’t take lightly the decision to hire an agency. The most qualified prospects are efficient and forthcoming, and they respect your time.

But, I’m sure you’ll agree, most don’t make knee-jerk decisions

That’s why using proof in your Facebook ads is one of the best ways to ensure that qualified prospects will fill out your contact forms and call you on the phone.

To illustrate the magic of proof, we ran the following split test:

We were already using proof in one client’s ad:

But we decided to pull out all the stops. We removed all the numerical proof from both the ad and the landing page of one ad, and we doubled down on another, punching up the headline with even more proof:

Here’s the sub-headline of the landing page from the “Uber-Proof” version:

And here’s the landing page with the sub-headline removed:

Then we let the test run for two weeks to collect data. 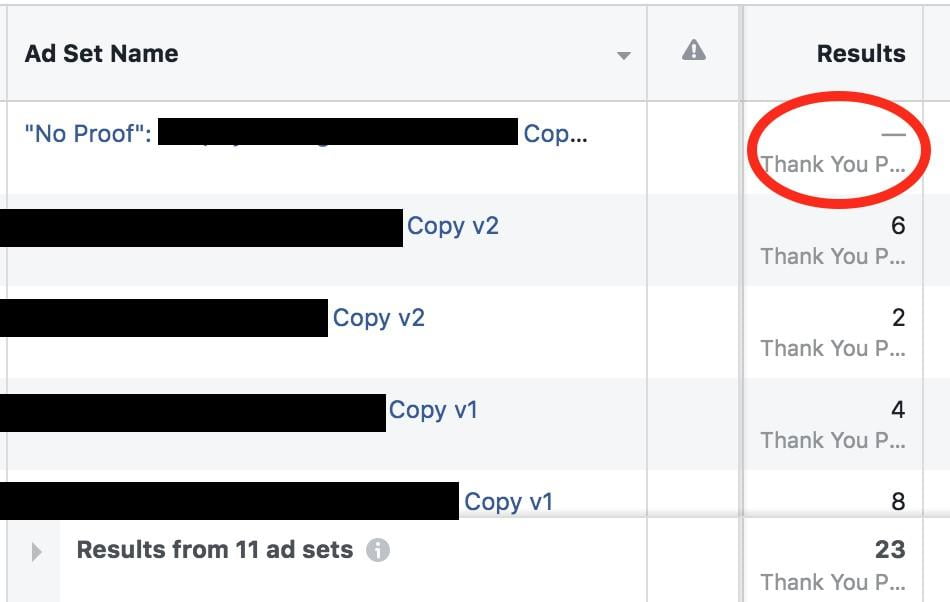 Caveats first: a split test expert will tell you this is by no means statistically significant. You’d need thousands of conversions.

But it’s strongly suggestive that the data underpins what makes sense to us intuitively when we put ourselves in the shoes of a business owner considering hiring the business running the ad: proof works.

Most of the articles I’ve read on B2B lead generation on the Facebook ads platform mention the multiple ways you can slice-and-dice your audience.

And many mention defining a client avatar really specifically…

Okay, maybe not the last one. But most articles do go on to suggest making a fine-grained uber-audience, with tons of cross-referenced targeting parameters.

There’s just one problem: we’ve tested these “smart” audiences against “dumb” audiences, and they’ve got a pretty poor track record.

Here’s how a “dumb” audience, with just three interests and little else, performed in a recent campaign:

Here’s how a “smart” one, with seven total parameters – two demographic and five interests – performed in the same campaign (fewer impressions because we shut it down once it got blown away):

Of course, we’re cherry-picking here (even though there are dozens of other examples I could include if I weren’t conscientious of taking your time).

But it only takes one counterexample to disprove a theory – that complex audiences and “pre-defined” avatars always perform better – and we’ve got countless such examples.

In fact, we’re hard-pressed to find a “smart” audience that does outperform a dumb one.

I’ve got two hypotheses for why this is: one theoretical and one grounded in Facebook ads theory.

First, if you’re a fellow fan of Nassim Taleb’s books The Black Swan and Antifragile, you’re familiar with his theories on “teaching birds to fly.”

Simply put, human beings have a pretty garbage track record of predicting the future (see the ‘08 financial crash) or determining in advance what people will buy and what they won’t (see practically any business case study).

A “smart” audience in Facebook does just that: tries to predict in advance the exact characteristics of buyers, subscribers, clickers, or leads.

The more effective way to tell?

That’s why, for every campaign, we put up to 100 potential interests in a spreadsheet and test at least five of them in parallel at all times.

We let the results tell us which targeting parameters work best.

My second theory is really just a Facebook fact: as long as you’re tracking the right conversion parameter, the algorithm will figure out who to show the ad to in order to get the lowest conversion costs. (It’s worth shouting out another important point of Allen Finn’s article: make sure you know how to use the tracking pixel!)

When it comes to how much audience you give Facebook to “play with,” there’s a balance. Make your audience too broad, and you’ll run out of budget showing your ad to everybody in the universe before you get any conversions. But narrow your audience too much, and you’re limiting the algorithm’s ability to find potentially qualified prospects.

And a lot of the “smart audiences” do just that: exclude people Facebook could potentially identify as good prospects.

Get SUPER Specific with Your Copy

There’s a marketing saying that goes “Google is where people go to make a decision; Facebook is where they go to avoid making a decision.”

And yet, as I’ve shown, some of the cheapest qualified B2B leads are not on Google ads but rather on Facebook.

Well, there’s less competition, for one, as long as most business owners continue to believe Facebook “doesn’t work” for B2B.

And it’s also harder to create bidding wars of the type you see on Google ads, because Facebook’s platform is audience-based rather than keyword-search-based.

But the above axiom does get one thing right: You don’t have the luxury of just being the-thing-somebody’s-searching-for:

That’s an advantage if you don’t want to be commoditized and comparison-shopped, like the mowers above.

…and that requires specific copy.

Say you’re fed up with your inventory software.

You wish it pushed real-time updates to all the handsets. That way your employees wouldn’t have to waste time logging on to one of the core computers to check their inventory.

Now, say there was a software company who made just that.

Do you think you might click on an ad that said “Finally – an inventory software that pushes updates in real-time,” with a headline that said, “Stop Wasting Time Logging on and Get Back to Business”?

I sure would, in this obviously completely hypothetical example.

What if instead it said, “Acme Inventory Software, for all your inventory needs”?

But hopefully you see my point. Specificity matters when you’re getting people’s attention while they’re looking at baby pictures on Facebook.

Want to Try Facebook Ads for Your Business, But Scared of Unqualified Leads?

When businesses see crappy results from Facebook ads, it usually takes on of the following forms:

But, as we’ve shown, qualified prospects are out there, and they will respond to your company. You need to:

Unqualified leads will waste your time. Apply these tactics to your Facebook ads account, and I guarantee you’ll not only have fewer of those but also attract more of those high-quality B2B leads you’re looking for.

Nathaniel Smith is a direct response marketing strategist who specializes in Facebook ads for B2B.