Help! I Raised My Google Ads Bids and Got LESS Traffic! 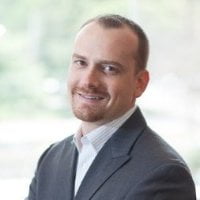 If you’re a reader of this blog, you’re probably familiar with the basics of the Google Ads (AdWords) auction. You place a bid, you win a position on the page. And the higher your position, the more likely you are to get the click.

If you’re a small business with a limited budget, you’ll need to be smarter than this. Let’s use a simple example to illustrate why.

Related: How to Use Flexible Bid Strategies in Google Ads

How Raising Your Bids Could Lower Your Traffic

Let’s imagine this is the universe of possible impressions you could get. It represents searchers who meet all of your criteria: the right search term, the right geography, the right language, and the right time of day.

And let’s make a few basic assumptions about your performance:

Expected Actual Cost-Per-Click: $1 (80% of your bid, just as a nice round number)

Great! You have enough budget to cover every single click that Google expects you to get at the price they expect you to pay. So, in order to use your entire budget, they’ll enter you into every single auction, in the hopes that you’ll get 2% of the clicks, pay $1 for each of them, and get a bill for $100.

But you’re disappointed with your traffic. And you’ve noticed that your average position is kind of low on the page, maybe below the fold. You’ve got room to grow, so you raise your bid. Let’s change your bid and see what happens:

If you make no change to your budget, you only have enough to cover a third of the clicks that Google expects you to get at the price they expect you to pay. So in order to use your entire budget, they can only enter you into a third of the auctions! And even with the higher CTR at the higher position, your real number of clicks goes down!

Maths – they can sting.

Google actually provides you this information in a column called “Search Lost IS (Budget).” It’s displayed as a percentage and represents the percentage of the universe of possible impressions (see above) where you were not even entered into the auction because you couldn’t have afforded the potential click.

Just as a quick aside: Search Lost IS (rank) is the percentage of possible impressions where you were entered into the auction, but you lost.

Always move your bids and your budgets in tandem: Raising your bid isn’t doing you any good if you can’t afford those more expensive clicks. If you decide that you need to raise your bids, budget for it.

Now let’s look at the same example, but in this case, the advertiser chose a different tactic for improving their Ad Rank: Quality Score. They worked on making sure their text ads were highly relevant to a small group of keywords. And in return, Google gave them a deeper discount from their bid.

You’re still budget-limited, and you’ll lose some impression share, because you can’t afford every single click (the expectation for how many clicks you’ll get has gone way up). But your traffic this time has increased.

Here’s how the three scenarios compare:

Work on your Quality Score instead of raising your bids: With an increased Quality Score, extra clicks require no change in your bid or your budget.

In my example, the advertiser was most concerned about increasing traffic to their site (clicks). But I’m sure that some of you are looking at the bar above and are alarmed that there’s so much lost impression share. Neither view is wrong, necessarily; it depends on your goals. Do you just want people to see your ad? (Branding) Do you just want people to visit your site? (Consideration) Or do you need people to convert?

Know your goals: You might not have this problem at all if you’re focused on some other metric like ROI.

If you’re dead set on improving your position on the page, Ad Extensions are another way to do it. Since October of 2013, the AdRank formula has included the “expected lift” from extensions. If you don’t have extensions turned on, your expected lift is zero. (And adding them increases your expected lift by an infinite percentage. Maths again!) If you already have them, do some A/B testing and work on improving those along with your text ads. Just like working on your Quality Score, you’re likely to get a lift in clicks, but a decrease in Impression Share.

Add or improve Sitelinks and other extensions to your campaigns: Just like with Quality Score, these extra clicks require no change in your bids or budget.

As with all methods of optimizing your account, the most important thing is whether your spend is working for you. Hypothetically, if you can make $1.01 by spending $1.00, you should do it. We all live in the real world, though. You’re a small business person and investing more money in marketing is a calculated risk. Hopefully I’ve given you a little extra insight into what you’ll be getting yourself into if you raise your bids. Maybe going after some “free” extra clicks first will be better for your business.

Andy Stefano currently manages the Technical Support team at WordStream. He lives with his wife and two children in Watertown, Massachusetts. He knows what “PC Load Letter” means.

See other posts by Andy Stefano