Want to increase conversions on your landing page? Try changing your headline.

The reason? Headline changes have the power to provide a 10%+ lift, while taking all of – oh, I dunno – five whole seconds to change.

There’s almost no better bang for your buck, as headlines are one of the easiest elements of ads and landing pages to change.

What makes your job even easier is that your headlines actually shouldn’t be unique. Here’s why, along with 5 proven headline formulas to follow.

Why It’s Better to Copy than Be Clever

Contrary to popular belief, the best marketing isn’t always the most creative.

That point was illustrated by an interesting anecdote in the excellent Made to Stick. In ‘99, 200 of the best ads were scrutinized by Israeli researchers. These were the best of the best, the finalists and award winners from big advertising competitions.

Surprisingly, there were a lot of similarities between them. In fact, 89% of these ads could be classified into six categories or “templates”!

If that statistic wasn’t shocking enough, the same researchers looked at a different set of 200 ads thathadn’t won any awards. In other words, these were the losers. And the researchers were only able to classify 2% of them.

Believe it or not, that’s GREAT news. Because it means you don’t need to be some copywriting ninja to deliver ads or landing pages that perform.

You can take the same basic message, rework it with a few different formulas, and your odds of success go up dramatically.

If you’re looking to get un-stuck and un-suck your headlines, here are 5 places to start.

The best marketers are also sometimes the laziest. Because there’s no need to reinvent the wheel when your customers can do the work for you.

For example, substituting one happy subscriber’s direct quote of “Yours is the only newsletter I actually read” as the new landing page headline resulted in a 24.31% conversion rate increase for Laura Roeder.

Testimonials act as a risk-reversal, increasing the credibility of a claim being made by using an independent third party to introduce the value of your product or service.

Years ago, Basecamp (formerly 37Signals) found this out first-hand while running conversion tests for their Highrise CRM product.

They switched up their standard, software feature/benefit-driven landing page for a clean image of a real customer, followed with a direct quote for the headline that summed up the major benefit her company received.

You can get testimonial information from, you know, actually speaking to customers, uncovering (a) what their daily goals or aspirations look like, before (b) examining the problems or pain points that are preventing them from achieving said goals.

But sometimes it’s difficult (or damn near impossible) to speak with customers about their issues. They might be too sensitive or private.

That’s where my favorite headline testimonial example comes in, this time from Joanna at Copyhackers.

Speaking to people suffering from alcohol or substance abuse, who may not exactly want to admit it quite yet, would be rather difficult. So instead, Joanna browsed through customer reviews on Amazon to finally land on the perfect headline variation.

They switched gears from “Your Addiction Ends Here” to the new headline “If You Think You Need Rehab, You Do.” They saw 400% more clicks with 20% more leads too.

You might expect “How To” or some list variation to be the most popular phrase. But they weren’t (we’ll get to those in a little bit).

Instead, the most popular phrase used in these viral headlines was: “This is”

Not so much when you really stop to think about it though. That phrase hints or suggests at something to come. It teases, pulling back the curtain just enough to give you a sample (yet stopping short of giving away the whole plot).

Cliffhangers tend to be among the most clickbaity (in a good way) headlines, used extensively by social sharing mavens like BuzzFeed.

For example, here’s one of my favorites: “This Stunning Birth Photo Capture Something That Occurs In Less Than 1 in 80,000 Births”

The best headlines tend to also be the most specific, which heightens the realism and intrigue. Incorporating bold language like “stunning birth photo” and “‘occurs in less than” helps reinforce an element of surprise, which is the perfect pattern interruption to halt scanning, multitasking readers in their tracks.

Further, incorporating quantitative numbers (which we’ll explore in more detail in the next section) like “less than 1 in 80,000” makes this headline incredibly irresistible.

How about a more serious example?

Years ago, the Conversion Rate Experts worked with Moz (who were still SEOmoz at the time) to completely rethink a landing page that resulted in over $1 million in new revenue.

One of the key changes they made was to switch up the headline, going from a standard “buy now” type headline to the excellent: “When eBay, Disney and Marriott need SEO help, here’s what they do…”

Piggybacking on successful brands instantly add credibility to this headline, while at the same time creating an open loop in the back of your mind that needs to find out how to emulate these successful brands.

Your widget exists to solve a problem. It could be a hard one, like saving a certain amount of money, or it could be a soft one, like making people feel better about themselves.

Either way, encapsulating those qualities or end results in a catchy headline can deliver better results over a more generic one. Joanna calls this formula “The Value Prop” because it “offers something unique and highly desirable.”

The trick is to (a) identify what your potential customers value the most and then (b) capitalize on how you’re able to do it better/faster/more uniquely than any other direct competitor.

And one of the best ways to do that is to use a verifiable number.

This ain’t just a new, web 2.0 (or are we on 3.0 yet?) thing either. Remember Ogilvy’s arguably most famous (and successful) headline?

For example, in a multivariate test of six different PPC headlines for a dentist, Marketing Experiments landed on one winner that resulted in a 72.76% lift in conversion rate: “Dental Plans for $8.33 a month. Acceptance Guaranteed.”

Again, they tested Google Ads headline copy (where the body descriptions and everything else stayed the same). Here were the headline variations:

Putting together a few of the lessons examined here so far, only one of those headlines combines specificity with a quantitative end result, while the other two lack proof of an outcome.

The first headline outperformed the worst one by a whopping 259%!

Another way to get your value proposition headlines to stick out from the rest is to ignore the positive benefits, instead going straight to the negative ones.

Helping people avoid external threats or fix internal mistakes they might be making has the power to outperform more positive messages by 60% according to a study done by Outbrain. Here’s a great example of a negative ad headline, from Helen Edwards’ post on emotional ads:

Saw this one coming, didn’t you?!

Because everyone loves ‘em. 36% of people prefer list-based headlines.

Whether it’s a big cheat sheet to serve as a reference guide or just a big funny compilation that promises to offer seemingly endless entertainment (and distraction) from whatever else you’re currently doing (or avoiding), lists are consistently proven to be among the most popular headline formula options available. 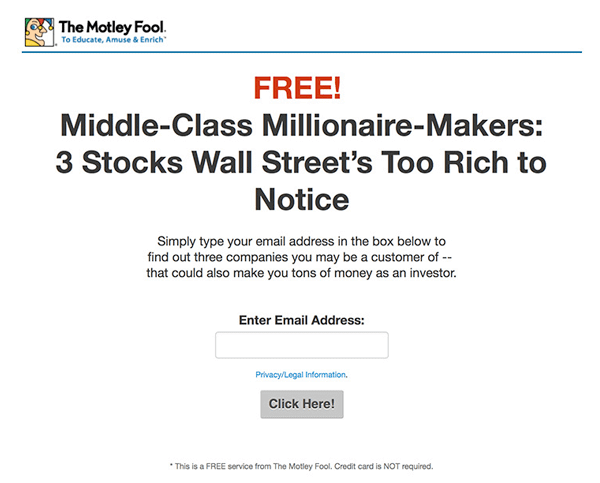 No strangers to writing effective list-based headlines, check out a few of their examples on Swiped.co and you’ll quickly notice an interesting pattern…

According to a study conducted by Outbrain (via Content Marketing Institute), odd numbered listicle headlines outperform even ones by 20%!

And that ain’t all.

You’ll notice the earlier example also uses a colon. According to that same Outbrain study, including a colon or hyphen in your title can mean a 9% improvement.

Buffer loves this approach, commonly employing both “The Double Whammy” (two headlines) and “The Amuse-Bouche’” (two items from a list + the list) on the regular:

The “How-To” headline is a close cousin to the listicle, which is the third most popular headline preference at around 17% according to Conductor.

It’s also one of the most popular phrases used in the most viral headlines too (just behind the cliffhanging “this is”).

But despite the popularity of those two little magic words, you don’t have to take it too literally.

After all, the key ingredient of a ‘how-to’ headline is to show someone how to do something. To earn more. Save more. Be happier. Feel less stress. You’re detailing a step-by-step process to get them from A to B (whether or not those two words make an appearance).

Here’s what I mean: Visual Website Optimizer had a case study detailing how a change in headlines resulted in a 90% conversion rate increase. They tested these four options, with the fourth (and most how-to-ish) coming out on top:

These two variations emphasize different things (the first is a benefit, the second is loss aversion), but both how-to headline formats still outperformed the first control variant by 41% and 11% respectively. 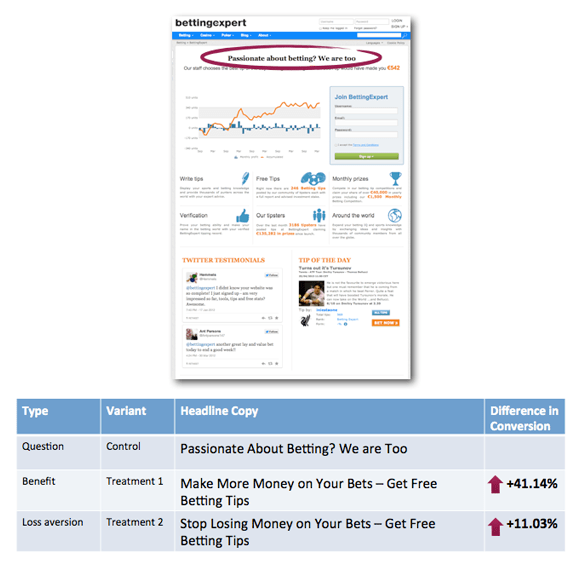 Instead of just describing a static state (“passionate about betting”) the variant headlines promise to teach you something and make you better.

Counterintuitively, the most successful advertisements tend to follow the same common themes or patterns. So too for headlines. Here are the headline formulas you can count on to work:

Instead of wasting hours and hours on a clever headline that might miss the mark, use one of these five tried-and-trued approaches to set yourself up for success.

See other posts by Brad Smith