Google Ads Attribution Models: How to Choose, Use, & Improve Them

Attribution models are essential for measuring the true success of your paid advertising campaigns—but they’re also confusing. In this post, I’m going to:

The importance of attribution models explained through baseball

In his book turned movie Moneyball, Michael Lewis shows us that it’s too simple to judge players on the field based off their runs, RBI, and batting averages.

The Yankees may have dominated the MLB in the 90s, but the price they paid for that talent was prohibitive for teams with a smaller budget to compete. In 2001, the Oakland A’s GM Billy Beane had to make the best of a gutted team, a smaller budget, and a radical idea. Rather than competing in bidding wars for conventionally talented players, the Oakland office recruited its talent by evaluating its players on a different set of metrics, such as on base percentage, and focused on recruits typically overlooked by larger teams, often getting talent at a fraction the price.

The end story of the 2001 Oakland A’s is that they still hold the MLB’s third longest winning streak in history and won as many games as the New York Yankees with a third of their budget.

Great story, right? But what does that have to do with paid search?

Well, how do you – and your competitors – evaluate your keywords and campaigns? Most advertisers, enterprise and SMBs alike, use CPA, or cost per action, as their primary KPI. But SMBs find themselves in the same place that the Oakland A’s did. Conventionally attractive keywords can be expensive on the SERP, and SMBs don’t have the budget to compete with giant advertisers like Amazon. If smaller businesses want to be successful, they need a different set of metrics to evaluate their success and outsmart their larger competitors.

I’d typically deny this, but I’m not perfect. Not long ago, I took a new client from one of my peers and the account only had a few campaigns. The client sold blinds and window shades and had a number of strong campaigns – a shopping campaign, branded product specific campaigns – and one campaign that drove a lot of “top of the funnel” traffic on keywords like “blinds” and “shades” but drove very few conversions.

That last campaign had a CPA that was well above the average, so I did what I often do – I reduced bids and stripped budget from the campaign, hoping to cut the bleeding. Nothing out of the ordinary. But performance the next few weeks was anything but normal. When I reduced that one “under-performing” campaign, my other campaigns began to struggle.

It took a few weeks for me to piece it all together, but reducing that one campaign’s budget reduced not only the clicks and conversions from that campaign but also reduced the number of people searching for his brand and product in the following weeks. People who were searching today for “Blinds” were the people who would search for his brand or come back via a remarketing or RLSA campaign 2 weeks later. All told, cutting this campaign’s budget in half reduced this client’s overall search traffic by 10% and reduced his CVR by 26%!

And that’s how I learned the importance of understanding attribution modeling. I was wrong to only consider the direct conversions from that campaign when evaluating its performance. Like players on the field, your campaigns play together and support one another. It’s foolish for a coach to evaluate a player’s performance without his team, and it’s equally foolish for marketers to evaluate a campaign’s performance without looking at the rest of your marketing.

Nine out of 10 of marketers agree that understanding attribution of your paid campaigns is important, according to AdRoll, but still 58% rely on a single-touch attribution model to evaluate their campaigns’ performance.

It’s clear we value proper attribution, but implementing it is difficult. But it doesn’t have to be! There are several simple, free tools to help you better understand how to properly attribute the success of your paid search campaigns as they relate to your overall marketing goals.

Here are three strategies you can use to make sure you don’t oversimplify your attribution modeling, like I did.

How to view attribution paths in Google Ads

Conversion paths offer this data and can be easily viewed within Google Analytics or Google Ads. In Google Ads (formerly known as Google AdWords), select the wrench icon in the top toolbar, and then select the “Search Attribution” tool under the “Measurement” column:

From this view, you can view the exact paths of keywords or campaigns that your customers navigated before finally converting:

The value of a goal depends on the game you’re playing. A single possession is unlikely to change the outcome of a basketball game, but a single play may change the outcome of a hockey or soccer game. Consequently, there’s no single way to value every player’s contribution to their team. Different models are used for different sports to accommodate for the value of different goals. Similarly, Google Ads provides different attribution models for different advertising objectives.

Single-click attribution models will credit the final conversion entirely to one interaction. It’s simple and easy to understand, but it doesn’t give you a full view of the impact of your ads on a user’s path to conversion. These models include:

Last-click attribution model gives full credit to the very last click that drove someone to your website before they converted. This is the default attribution model of Google Ads and its oldest. Although reliable, it will often over-credit the value of branded and other lower funnel campaigns.

First interaction attribution model is the opposite of the last click attribution model, giving full credit to the very first click that drove someone to your website before they convert later, often via a different ad campaign. It’s a longtime favorite of brand marketers who might run display or video campaigns since it credits these campaigns with many of their conversions.

Multi-touch attribution models will give partial credit to every interaction that lead to a conversion. How you split the value of each conversion into fractions depends on which model you use.

Linear attribution model gives equal credit to each ad a user clicks before ultimately converting on your site, regardless of where in the conversion path the interaction occurs. For example, if a user interacts with four of your campaigns before ultimately converting, then each campaign will be credited with 0.25 conversions. The benefit to linear attribution is that it credits every influence in a user’s conversion path, but it isn’t flexible to consider that some interactions are more influential than others.

Time decay and linear attribution models are a natural transition for those used to Google Ads’ last-click model, and it’s ideal if most of your advertising is designed to target the same audiences while evaluating their potential purchase, such as below. All three advertisers (Soccer.com, Zappos.com, and DicksSportingGoods.com) are serving both search and shopping ads to users searching for the same product. Each of these advertisers therefore needs to understand how their search ads affect their shopping campaigns results and vice versa.

This model can work for advertisers who are used to first-click attribution models or whose campaigns are set up for branding or exposing prospects to their products that they might not even know exist yet. For instance, drscholls.com may benefit from understanding how often users who are searching for queries not directly to their product (like “runner’s knee symptoms”) ultimately come back to convert via more direct queries.

Google’s latest attribution model is also it’s most sophisticated. Data-driven modeling looks at how often a touchpoint appears at that location in a user’s path and compares its relative impact from similar paths without that touchpoint. For instance, in the example below, it doesn’t appear as if the display campaign is driving many direct conversions, and many conversions occur without it in a conversion path. However, those users who are exposed to the display campaign seem 50% more likely to later convert via email. Due to this relative jump in the conversion rate, data driven attribution would credit this display campaign with half the conversion value.

2021 UPDATE: Data-driven attribution models are becoming the default for all new conversion actions in Google Ads. Learn everything you need to know here. 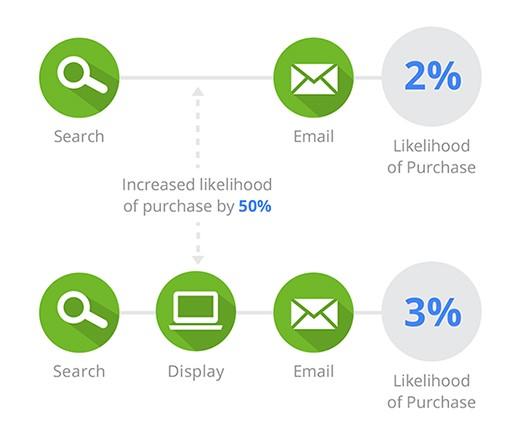 Data-driven attribution is unbiased towards any place in a user’s conversion path and is powerful for those advertisers who drive many, many clicks and conversions across a variety of different campaigns. However, smaller advertisers may not find it as beneficial since it requires much more data to provide an accurate representation of how a typical user may or may not convert due to the presence of a particular campaign.

3. Add other channels to your attribution model

No individual player wins alone – they’re made better with teamwork. Similarly, even the best Google Ads campaign doesn’t work alone. Search doesn’t work in a vacuum; it’s reactive to all your other campaigns outside of the SERP and offline. Consequently, it’s important to understand the impact of your email, social, video, and offline advertising campaigns.

Even something as simple as creating a Bing campaign can impact how people interact with your Google campaigns. Over 100 million searchers rely on both Bing and Google to deliver their search results, so what they discover on Bing may later impact what, or who, they search for on Google. And as it turns out, clients who begin advertising on Bing not only reach new people searching on Bing but will also see an average of 26% increase in searches for their brand on Google! Similarly, by advertising on display or Facebook advertisers see a noticeable bump in their branded searches.

These cross-network effects are scalable the more people interact with them. Consider how people use social media – they interact, they share, and they’re regularly exposed to new things from their networks. Consequently, people will often discover on social and then later search on Google to learn more. As a result, trends on social will often later become trending searches on Google in the following hours.

Even your offline ads will directly impact your search campaigns. Your teams may use radically different KPIs to measure the success of your TV ads, but don’t ignore how they will impact your search reach. Recently, one of our clients ran two TV ad spots and, in the minutes following each ad, they saw a huge spike in the users visiting their site, over six times as many visitors as usual!

Although that spike in traffic is thrilling, most of it is temporary. But after these thrilling spikes of traffic ended, traffic remained elevated by 10% more than usual well after the first ad spot and 20%  following the second ad run.

But not all ads attract the same kind of traffic. The client’s search campaigns used to attract nearly exclusively desktop traffic, but following these TV ads, most of their traffic was coming from mobile. It turns out that many of those who saw the ads on TV were much more likely to also be using multiple devices at once. These multiscreen users were more than three times as likely to respond to a commercial by searching on their on their mobile phones rather than a desktop!

It’s all too easy to make the mistake of attributing all your conversions to the final click, but in reality, the picture is usually much more complicated. Level up the sophistication of your attribution modeling with these strategies and get a much deeper understanding of where you customers are really coming from.

Mark is the Director of PPC at SearchLab Digital. Previously, Mark worked at WordStream and was named the Most Influential PPC Expert of the Year by both PPC and Microsoft.