Banner Ads Are Back from the Dead: How Google Has Given Banner Ads New Life

Banner ads are largely seen these days as fossils from the internet’s dinosaur period, back when blinking text was cool and Angelfire sites were all the rage.

Such online billboard ads have long been considered deceased, dead, and buried, with few mourners grieving the demise of web banner ads. However, a new breed of banner ad has evolved and is on the rise thanks to Google, and they’re hungry for blood (or clicks. Whichever is easier).

Today we’re looking at the horrific past of banner ads, their new and improved counterpart, and how you can make banner ads work for you!

Just like the Iraq War, slavery, and parachute pants, banner ads are an ugly part of our history. They’ve generally been seen as a public nuisance and hideous to boot. Once commonplace, their popularity dive-bombed in 2008, with most users saying good riddance! 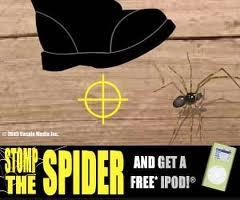 As Brian Morrissey of Digiday notes, “The banner ad is now 18 years old. It has become a symbol of all that’s wrong with online advertising. It is more often than not devoid of creativity; it stands out as an intruder on webpages; and it is mostly ignored by readers.”

Harsh words, but not untrue! A couple years ago Solve Media did a report showing just how ghastly click-through rates for web banner ads are. Turns out you’re a LOT more likely to accomplish any number of amazing feats than you are to click a website banner ad. In fact, you’re:

Welp, time to break out those hiking shoes! Despite these dismal CTRs, some claim that even those run-of-the-mill website banner ads can serve a valuable purpose for advertisers.

Is There More to Banner Ads Than CTR?

These days, standard banners get somewhere around a 0.3% CTR, and while that’s pretty darn terrible, one has to look past CTR to see the big picture.

Many simply want to know, do banner ads work? The answer isn’t so simple, and takes more into account than just CTRs. With internet banner ads, impressions can be nearly as valuable as clicks – they may not be gold, but bronze is still valuable! Marketing Profs reminds us to heed PEAR – Potential Eyeball and Retention. Some banner ads aren’t even designed to get clicked; they are essentially there for branding purposes. Even mosquitos have a purpose in the grand design of advertising.

While some online users claim they ignore all online ads completely, the truth is that we humans aren’t as good at voluntarily blinding ourselves as we think. If a bright, colorful banner appears on your screen, you’ll look at it, and while it may have no affect today, days, months, or even years later it may become relevant.

Maybe you don’t need a new laptop today, but when an ad for that slick new MacBook Air appears on your favorite blog, you may think “Wow, that looks great! I’d love to get my hands on one of those.” A few months later your buddy drinks a few too many Twisted Teas and accidentally pours one all over your computer! Before you know it, you’re mulling over what new laptop to buy and what comes to mind, but that MacBook Air!

While PEAR is a metric that can’t be ignored, it’s incredibly difficult to measure how a banner ads affects click-less assets like brand awareness, and with internet banner ads as a whole being largely ugly and irritating, it’s no surprise banner ads of ages past have such a bad reputation.

Google Gives the Banner Ad a Much Needed Makeover

What makes the Google Display Network better than the previous generation of banner ads? A few things, the major one being remarketing.

If you’re not familiar with remarketing, it’s easier to explain it in practice: You’re visiting a beer hobby site, looking for some classic German beer steins to add to your impressive collection. Suddenly you get a call from your friend wanting to know the movie times for Fast and Furious 9, which you two are seeing tonight. You click over to the Regal Cinema website to check the movie time, and after hanging up with your pal, you forget all about the steins. As you click around the web, you see a display banner ad that looks familiar – it’s an ad for those German beer steins you were looking at earlier! Oh man, you totally forgot about those! You click the ad, finish your purchase, and everyone is all smiles.

How is it done? A little cookie hops onto your browser when you visit a site with a remarketing campaign set up. If you navigate away from the page, it might toss up some display banner ads around the Google’s banner ad network, aka the Display Network, trying to get you back to that original product page you were visiting.

Remarketing ads perform drastically better than classic banner ads, with higher CTRs and conversions – up to 36 times higher. Why the increase? Classic banner ads are aligned with interruption marketing; they throw an ad in front users and hope for the best. This technique has been the foundation of most historical advertising, relying on obstructing a user’s natural flow to promote a message. In order to get attention, interruption marketing is often forceful, loud, obnoxious, and strives to be shocking in order to demand attention.

However, remarketing changes all that, transforming interruption marketing into inbound marketing. Inbound marketing tries to merge itself with a user’s natural, organic flow by offering helpful content or something you’ve already shown interest in. Remarketing banner ads are inbound marketing; they don’t scream out the same proclamation to all users – instead, they offer a tailored, targeted, and intent-based ad experience that speaks to each individual user. 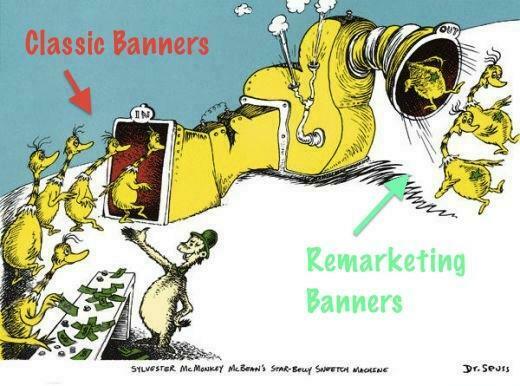 Remarketing banner ads may look similar to banner ads of the past, but they’re truly a whole new breed. They are more effective banner ads that are better for users and advertisers.

Online banner ads are also improving as Google makes it easier for advertisers to craft good banner ads. In efforts to get even more people on the Google Display Network boat, Google offers many tools and resources to help advertisers create banner ads with ease.

Banner Ads Are Back & Better Than Ever!

This new generation of improved banner ads means great things for advertisers, especially considering the popularity of images these days. Pinterest is a great example, showing the insatiable hunger users have for image-based content. Some of the most popular Pinterest images feature a single colorful image with a simple line of text that could easily be mistaken for a good banner ad.

Lock your doors, hide your kids, the banner ad is back and better than ever! The Google Display Network’s remarketing capabilities are bringing the banner ad into a new and glorious era.