Image extensions are one of the most recent types of ad extensions we can use on the Google Ads platform. Unlike most other ad extensions, these don’t rely solely on text to expand your coverage on the SERPs. With Image Extensions, you can use a number of images to accompany your ads to give them a visual component and make them more appealing.

Whether you’re familiar with them or not, Image Extensions can be a great addition to any campaign. Here’s everything you need to know about them.

History of images in Google Ads

Then in December 2019, they began testing image extensions, and as of Google Marketing Livestream 2021, they’re now available to all advertisers.

How to set up image extensions in Google Ads

Image extensions can be applied within the interface in the same place as all other ad extensions.

In any portion of the interface, click on the Ads menu, then click on Extensions down below. 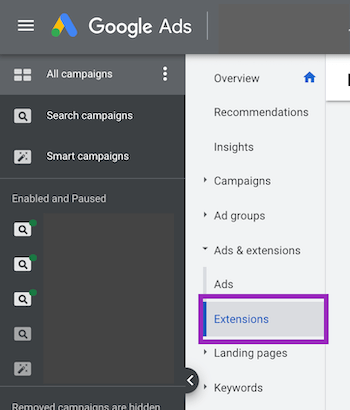 What levels can Google Ads image extensions be applied to?

When creating a new extension, the first thing you’ll be asked to do is choose where you want that extension applied.

Image ad extensions can be applied at either the campaign or ad group level in Google Ads. I’m often asked which makes the most sense to use and to be honest, it depends on your campaign structure.

If all ad groups in the campaign are promoting the same product or service and the image is relevant to all, then applying the images at the campaign level should suffice.

If your ad groups advertise different products/services and the images don’t carry over well, then you’re best setting them up at the ad group level.

Where can I get an image for ad extensions?

No matter which level of your account you apply them to, you first have to get image files uploaded into Google to be able to leverage them in your campaigns.

Upload from your computer

The easiest way to get images in place for ad extensions is simply to upload an image from your computer.

Just to the left of the Upload option in the editor, you’ll see SCAN. If you navigate to that tab, Google prompts you to add in your website URL. Once you do that, it’ll scan your website and pull in images for you to use for your ad extensions. 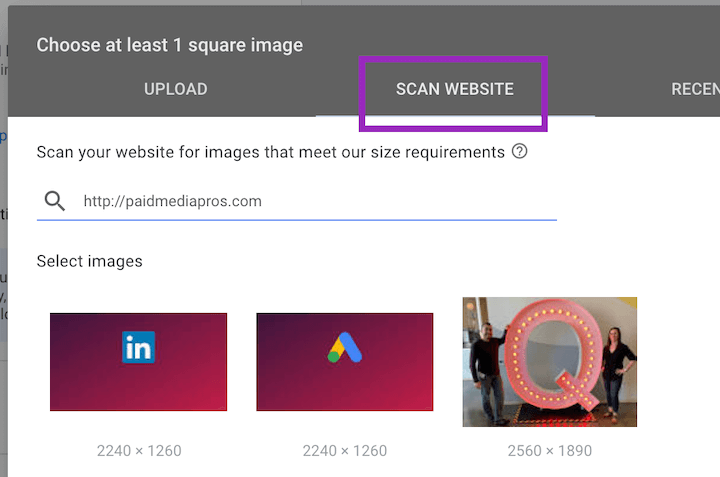 You can choose from the list of images they pull in, or you can use another feature I love.

Just below the website scan, you may see a list of social profiles that belong to you. When it scanned your site, Google also picked up your social profiles and worked on finding images from those platforms as well.

Maybe your website isn’t the prettiest and doesn’t have lots of strong images on it, but if you’ve been keeping up with your social channels, you can use those images for ad extensions in just the same way you use the ones from your site.

What are the Google Ads image extension specs?

Dimensions for image extensions should be familiar to you if you do any sort of social advertising. 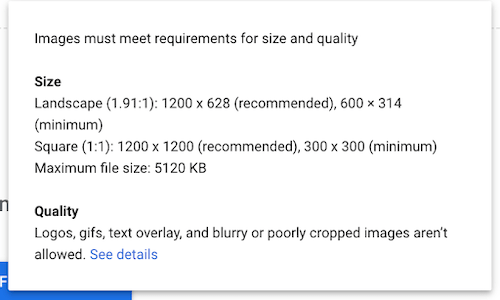 I guarantee you that your design team will be really happy to hear they don’t have to make lots of images with all sorts of crazy dimensions, unlike the Google Display Network banners.

If you have top-performing social images, just take out any of the logos or text overlays you have and use them as image ad extensions. 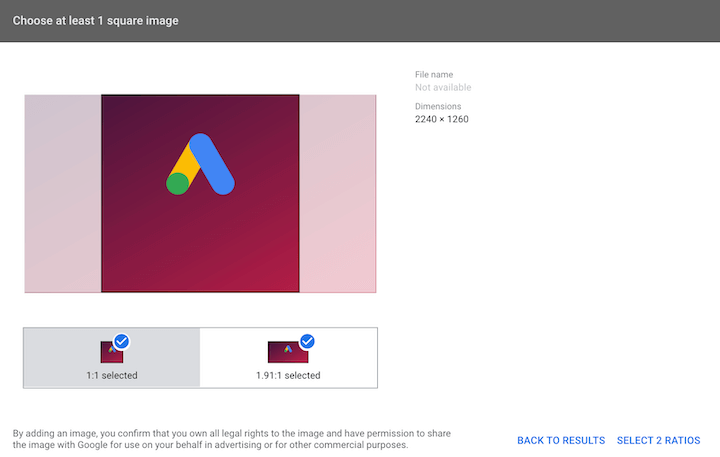 Another benefit is that Google lets you use the same images for one or both ratios if the image is suited to them and you can choose the portion of the image you want to use.

Each ad group and campaign is eligible to have up to 20 image ad extensions attached. Each ratio of an image you upload is counted as one. Even if you use the same image file for two different ratios, that will be counted as two of the 20.

How can I view my image extension performance?

Once your image extensions have been for a while, you can see their performance at a ratio level within the ad extensions portion of the interface.

Just like when we went to add image extensions before, you just need to click on the Images card and it’ll take you to a grid that shows whatever metrics you’d like to see.

To understand and improve performance for your entire account, use our Free Google Ads Performance Grader!

What happens when someone clicks an image extension?

You likely noticed that when we added images, there was no place to add any landing page.

Whenever someone clicks on an image extension, it’s treated the same way as if they clicked on the main headline of the ad. They’ll be driven to the ad level landing page, which is why it’s important to align your image extensions with your campaign structure. If you deviate too much, you’ll risk having a bad user experience when someone clicks on an image ad and can’t find that image, product, or service on the landing page they’re sent to.

This same principle applies to being charged. If you’re using a manual or enhanced bidding strategy, you’ll be charged the same cost per click that you would have paid on the headline click. For other bidding strategies, this will vary, but no matter what option you use, it’ll all operate as if someone clicked on the main headline of the ad.

Here are a couple of best practices I suggest employing when setting them up in your account:

The images you use must follow the Google Ads image extension policies. This means:

So although you’re really proud of your brand and you’d like to have some additional messaging in the images, Google will disapprove them if you use them.

Since you’re given up to 20 images, why not use as many different views as possible? Just like everything else in PPC, we never know what is going to work best. Test multiple images of the product at different angles, with different backgrounds, use some in-store and some lifestyle versions, etc. Mix and match and see what performs best.

Image extensions will never show up in a large format on the page. Just like in the previews, they’ll likely be a small square or rectangle off to the side of your ad. Choose images that have a single focal point and aren’t “noisy” so even someone giving them a quick scan can figure out what they are without having to work too hard.

Overall, image ad extensions aren’t difficult to set up and they can be very impactful for your ads. Take the time to make sure you have high-quality images that are relevant to the keywords and ads you have in your account.

Michelle is the Director of Client Services at Clix Marketing. She has eight years of experience in all aspects of PPC and brings a wealth of experience developing and executing campaigns across search, social, and display platforms in both agency and in-house settings. Her experience working with integrated, third-party SEM tools gives her an especially well-rounded and holistic view of the paid search landscape—one she shares regularly as an influencer, author, and industry speaker at events like SMX, HeroConf, and Pubcon.