Google just unleashed a gang of new Google Ads (formerly known as Google AdWords) features to help you improve performance in every cranny of your paid search campaigns.

Today, I’m going to run through everything you’ll need to know to implement these super-useful changes throughout your account.

Since the advent of Google Ads, folks like you and me have been forced to use their ad headlines and description to share promos with prospective patrons. No more!

We wrote about Google Ads promotion extensions back in May (when they were still in beta), but Google has finally decided to release them to all advertisers.

Promotion extensions allow you to update (drumroll) promotions that you can append to your text ads. Whether you’re sharing a discount code or simply sharing a site-wide discount, these ad extensions will send your CTR’s skyrocketing.

Let’s say you sell the best granola in all of Vermont. Hand-rolled oats. Dried quinces. The silkiest cacao nibs. Ounces of love infused into each delicious cluster. You get the picture. Instead of creating holiday-specific ads to share your Black Friday sale with prospective customers, apply an account-level promotion extension, like so:

Sure, this’ll help your ads take up more space on the SERP and make your sale pop off the page with a neat little price tag vector and some additional bold copy. But there are some additional benefit to using promotion extensions.

Promotion extensions allow you to keep your business’s sales and promos up to date without having to adjust your ad copy. Your headlines and description can be used to boost ad relevance and you won’t have to take stalwart top-performers out of rotation (which means you aren’t starting from square one when it comes to expected CTR). Both factors mean that amplifying your holiday sale on the search network doesn’t come at the cost of lowered Quality Scores and higher CPCs.

Promotion extensions also allow you to maintain your headline CTA. Instead of foregoing “Buy now” in favor of “40% off this holiday weekend,” you’ve got space enough to say both.

Speaking of adjusting ad copy (for better or worse), Google has decided to give you the power to test ad variants en masse.

Any PPC practitioner worth their salt is constantly A/B testing. Unfortunately, doing so has long been a bit of a pain, having to upload multiple copies of a given ad in which single components (a headline, a CTA, the inclusion or absence of holiday cheer) are altered and rotated against a control ad to determine its effect. With ad variants, conducting this split testing is a breeze.

Within the ad variants interface, you can:

I’m a big fan of that last one, particularly when it comes to testing which headline should be doing the ad relevance legwork (containing your target keyword) and which should compel your prospects to act.

Oh! In the event you choose to run with ad variants, don’t forget to pay exceedingly close attention to the Experiment split section buried at the bottom of the third step (in which the most prominent actions you can take are assigning start and end dates). 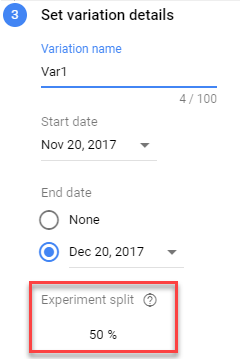 Experiment split refers to the percentage of your campaign budget that’s “allocated to your variation and the percentage of auctions your variation is eligible to participate in.” If you only want to conduct an experiment with a small subset of your advertising budget (which may very well be the case during a time of year in which many eCommerce businesses make a substantial share of their total annual profits), adjust your split accordingly.

The Display Network can feel like a bit of a crapshoot at times. Without either artificially limiting or diligently manicuring your ad placements, your killer banner creative goes unnoticed amid the dross of random websites that exist solely to funnel fractions of pennies to industrious basement dwellers.

This is less of an issue when it comes to remarketing, because the relative intent and previous activity of your prospects makes up for the fact that your ads may very well be floating in front of their eyeballs amid a flurry of fake news and photoshop-fueled celebrity rumors.

Well, now there is!

Per Google, custom intent audiences use “Google’s machine learning technology to analyze your existing campaigns and auto-create custom intent audiences… based on the most common keywords and URLs found in content that people browse while researching a given product or service.” Once created, these new audiences will live among your other Display network audiences.

For example, here are a handful of the auto-created custom intent audiences that have surfaced in our own account:

Basically, Google uses data from your Google Ads campaigns, website, and YouTube channel to determine what you sell, then cross-reference that against HUMANITY to auto-generate new, qualified (at least as far as Display goes) audiences. This kind of audience creation further cements Google shift towards a Facebook-like, audience centric mode of targeting on the Display Network, in which characteristics take the place of intent as a primary means of targeting net-new prospects.

In addition to these Skynet-created targeting options, you can also generate your own custom intent audiences using a combination of URLs and keywords.

Finally, we’ve got Gmail Remarketing. I was despondent earlier this year when I learned that Google was stripping the domain targeting feature from my beloved Gmail ads (for my money, there was no better way to rail against the competition).

The ability to remarket—and, more importantly, do so dynamically—via Gmail has turned my frown upside down.

Google’s calling it “an immersive shopping experience” in your prospects’ inboxes. I’m calling it a Black Friday boon. If you’re an eCommerce advertiser looking for a leg up as we approach the busiest shopping days of the calendar year, the ability to bring a prospects’ shopping cart into their inbox is just that.